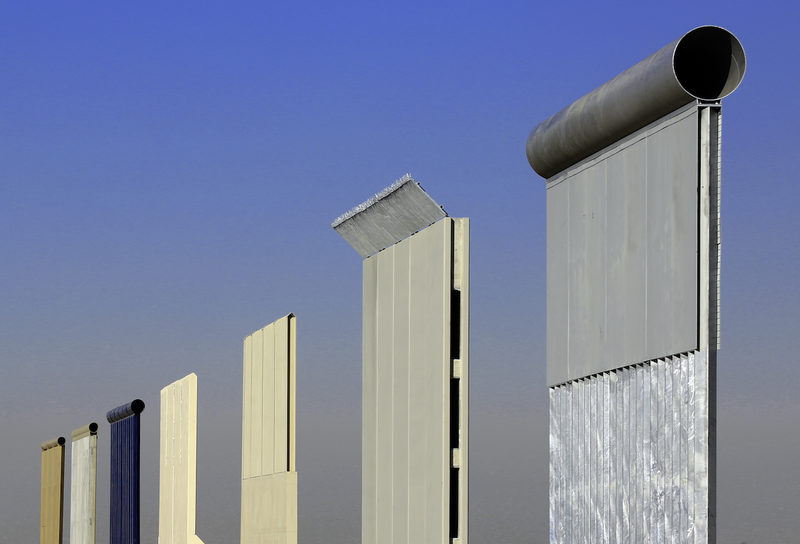 No, Donald Trump Is Not a Conceptual Artist. And Border Walls Are Not “Land Art”

I read the press release three times back to back, looking for any hint of irony. Or even confirmation of sincerity. I parsed the website, hoping an “about” page or mission statement could set my bearings. What exactly is MAGA, the “non-profit arts organization” petitioning the U.S. Government to designate the eight border wall prototypes erected outside of San Diego a national monument?

The eight prototypes, constructed by six firms and built using $3.3 million in federal funds, were unveiled back in October. MAGA’s petition to garner them protected status asserts their “significant cultural value,” and summons the Antiquities Act of 1906. The accompanying exhibition PROTOTYPES christens the walls “land art” and, from December 21, 2017, began offering tours from the Mexican side of the border. 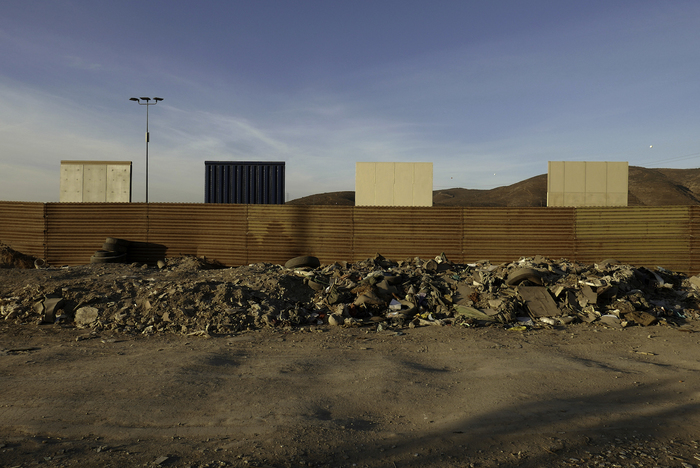 With a press release and hashtags (#MAGA, #borderwall) so completely and absurdly deadpan, you’re forgiven for not knowing whether you’re in on or falling for some sort of joke. “The walls are part of a multi-pronged security strategy to prevent the illegal migration of people, drugs, and human trafficking, and acts of terrorism,” describes the project announcement, “and are part of a border enforcement zone, which includes patrol roads, lights and surveillance technology.” Enlightening, thanks. But are they art? Are they monuments? Should they be?

The project, it turns out, is the brainchild of Swiss-Icelandic artist Christoph Büchel, who is something of an art world provocateur. Besides “making art great again,” MAGA claims to “question and adapt to the changing definitions of art.” PROTOTYPES is the first project, though a spokesperson tells me future projects are “in planning.”

I’m sympathetic to the mission of redefining what a monument is, thinking about how meaning and value are created and imbued, by and for whom. I even agree that, when viewed together, the prototypes are evocative of giant minimalist stelae. In fact, scrolling through images of the wall fragments is not unlike looking at Bernd and Hilla Becher’s industrial architectural typologies (they too, sought to preserve their subject matter, helping at least one building get designation as a protected landmark).

But Büchel swears he has no political stake or opinion here. “My political position, that’s not interesting in this context,” he told the New York Times this week, among other equivocal statements including, “I am an artist, but not the artist of this,” and “This is a collective sculpture; people elected this artist.” Without taking a critical position PROTOTYPES, as exhibition and petition, amounts to little more than a 30-foot-tall sight gag. Haha, look! Those disembodied walls look like minimalist desert land art! They sure do. But to label them as such is a dangerous desire.

They most certainly have “value,” even beyond their price tag. But what they represent also has consequences, sometimes life or death consequences, primarily for people on the south side of the wall. PROTOTYPES turns trauma into a punch line. It sanitizes the embodiment of the worst impulses in the American psyche: xenophobia, jingoism, racism. These compulsions are worth remembering, lest history repeat itself, but they are not worth honoring or protecting. America has always had these tendencies, has made carceral institutions from them, has erected monuments to racism and division. PROTOTYPES plays the inverse of the contemporary movement to deconstruct these monuments.

MAGA takes the walls not as an instructive or cautionary tale, but at face value, offering little explanation of why they deserve protection. “It takes a great deal of time and thought to install work carefully,” intones the MAGA mission statement. “This should not always be thrown away. Most art is fragile and some should be placed and never moved again. Instead of causing us to remember the past like the old monuments, the new monuments seem to cause us to forget the future.” 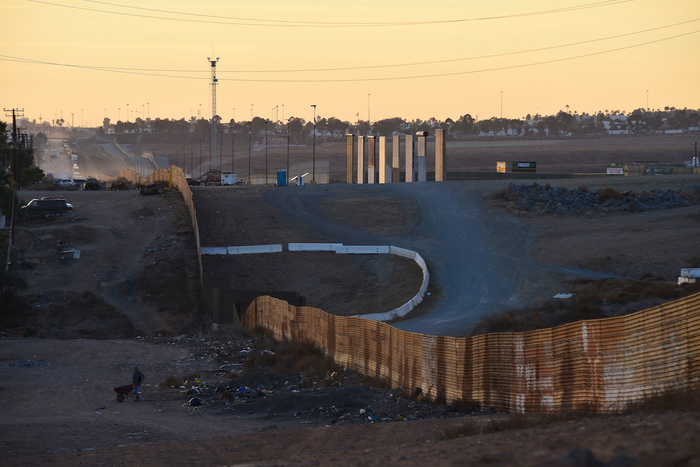 Being neither Mexican nor North American, what investment does Christoph Büchel have in these monoliths? Is this what happens when conceptual artists start treating the United States the way the United States treats the “Third World”? “Let me make this monument for you so you can reflect on how bad you have it,” the project seems to say. Such a sentiment would, at least, be taking a position. Büchel hasn’t even done that.

As a cornerstone of one of the most contentious political campaigns in recent history, the proposed border wall has been fertile territory for artists. Postcommodity has made work about the border for years, such as the porous Repellent Fence (2015). t.Rutt went ahead and started building a wall to reflect how President Trump’s policies would affect agricultural and service sectors. Last year artists projected light onto the prototypes and threw a picnic bisecting the current wall. MAGA’s is not even the first petition-as-artistic-gesture. Before Trump took office last January, conceptual artist Luis Camnitzer petitioned the President Elect to commission land artist Christo to build the wall. When Trump issued the call for proposals last March, Pittsburgh-based collective J.M. Design Studio proffered such designs as “A Wall of Hammocks” and “A Wall of Pipe Organs,” and “A Wall of Gravestones for Migrants And Refugees.” 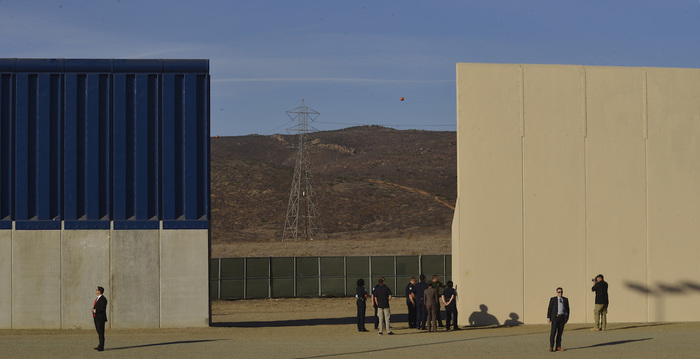 “All of a sudden my critical instincts seemed divided against themselves,” he writes. “The slabs in front of me seemed at once the most and least architectural objects I’d ever seen. They were banal and startling, full and empty of meaning. Here were the techniques of Land Art, medieval construction, marketing and promotion, architectural exhibition and the new nativism rolled uncomfortably if somehow inevitably into one.”

Hawthorne at least grapples with the challenge and even futility of his undertaking, though he ultimately focuses more on political symbolism than the lived realities of the people most affected by the wall’s erection. He muses on the physical and rhetorical meaning of building a wall—what he calls a “political weapon”—ultimately concluding that “these sections of wall are better understood for their collective symbolism than as competing entries in a genuine design competition.” 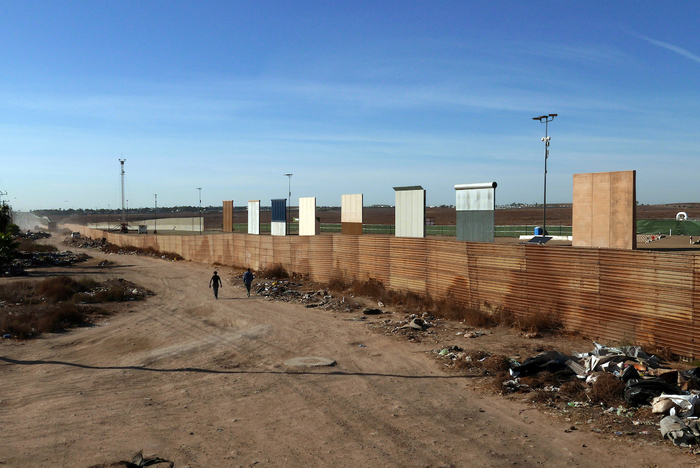 By not staking a claim, by not taking a position—even a questionable one—Büchel dooms his experiment to failure, while inoculating himself against critique, because, hey, “I’m not the artist.” How many times must we repeat that simply appropriating something wholesale, does not on its own constitute meaningful critique? Art need not be beautiful; art can be readymade. No one would argue that in 2018. But just because you can call something art with little effort, doesn’t mean you should. The prototypes are not aesthetic gestures: they are instrumental. They have a political purpose not so easily cast off. Büchel’s lazy sleight of hand, thankfully, does little to transform these walls into something more than what they are. PROTOTYPES is turning out to be a successful (outrage-)PR stunt, but it’s bad conceptual art.