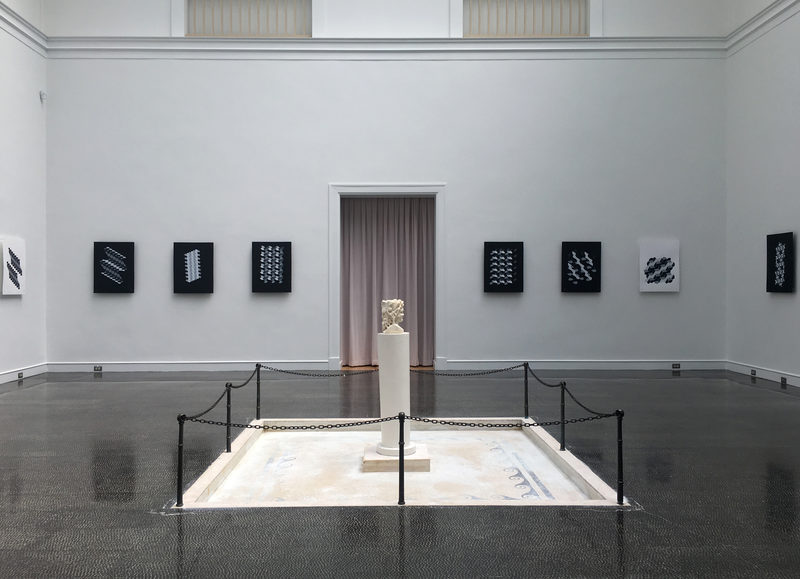 What Lies Between Is Gray

On display during the Santa Barbara Museum of Art’s renovation, Seven Doors: Jan Tichy and the Chiaroscuro of Art Museum Collecting shines a light on institutional exhibitions and collections, which construct meaningful connections from loose-fitting, tangential relationships. Though the exhibition jettisons color, Tichy’s tonal palette surprises by offering a reading that is far from black and white.

A drained water repository, embellished purposefully with black, stylized waves and by circumstance with white calcium trails, resides in the center of Ludington court’s architectural soft box. Rising from this antiquated dead sea, a curly haired Janiform Head rests on a modern pedestal. Neither visage faces the front door in receptive welcome, but instead, a worse-for-wear male looks toward a closed door—a barrier—and a youthful male faces a hallway—an open path. Though they represent two doors, their silent lips, like Mona Lisa smiles, leave questions. 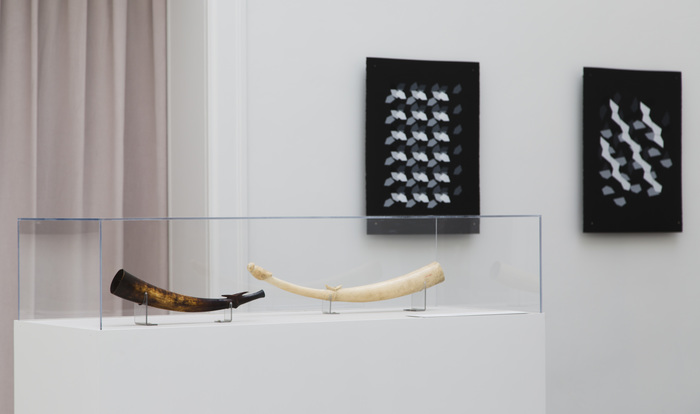 Beyond, two ivory Oliphants sit as impotent sirens, their phallic strength hollow, unutilized, voiceless. These two outmoded reminders of desire, in today’s world, turn into distasteful remnants from the past, bringing up an old way of thinking: of money above extinction. Though they are silent, as the only objects crafted by people of color and the only objects recommended for deaccession, their slight presence speaks volumes. 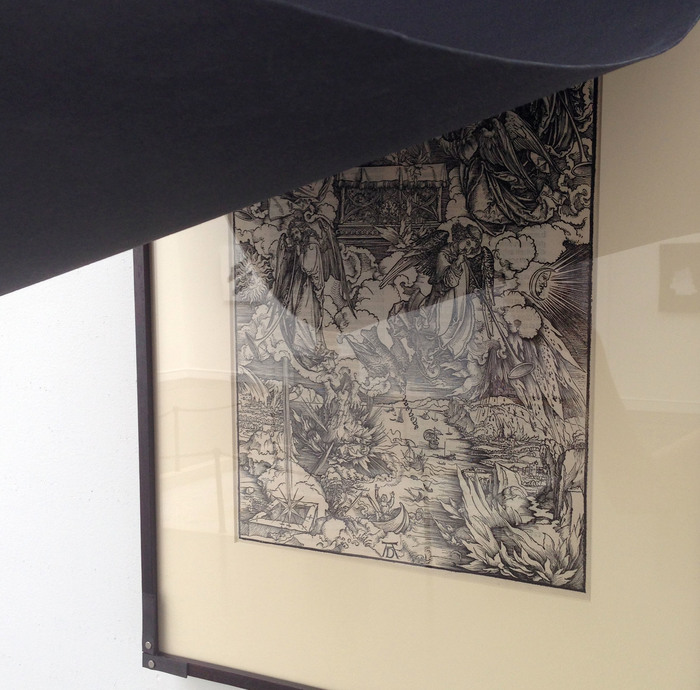 Shrouded in black, The Seven Angels Sounding Trumpets from the Apocalypse underscores instability by picturing chaotic content with the aesthetic precision of Albrecht Dürer’s graceful arcs and orderly lines. The seven trumpets, like the oliphants and Janiform lips, make no sound. A weary sun and moon seek to retire as an eagle cries down an indecipherable warning. Text bleeding through from the back of the print obfuscates this message further: of imperfections there must be shame.

Albrecht Dürer, The Seven Angels Sounding Trumpets from the Apocalypse, 1498, Woodcut on paper, Museum purchase with funds provided by the Women’s Board, 1966.26, Photo: Kimberly Hahn. 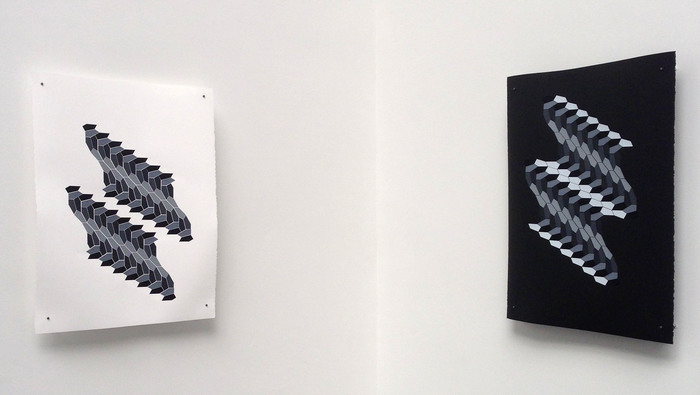 Type 15 (White) emulates a pathway through barricaded walls with sharp-edged obstacles, as if a safe zone, but also, a zone from which to control. White tessellations offer a mere whisper of presence on the buckling, toneless paper, while darker tones make irregular white margins appear to be mistakenly articulated as if hand cut. In Type 15 (Black), sharpness disappears as the black paper underneath fills the gaps and softens the edges of the darker tessellations to form a cohesive, undulating wave, a melting together. 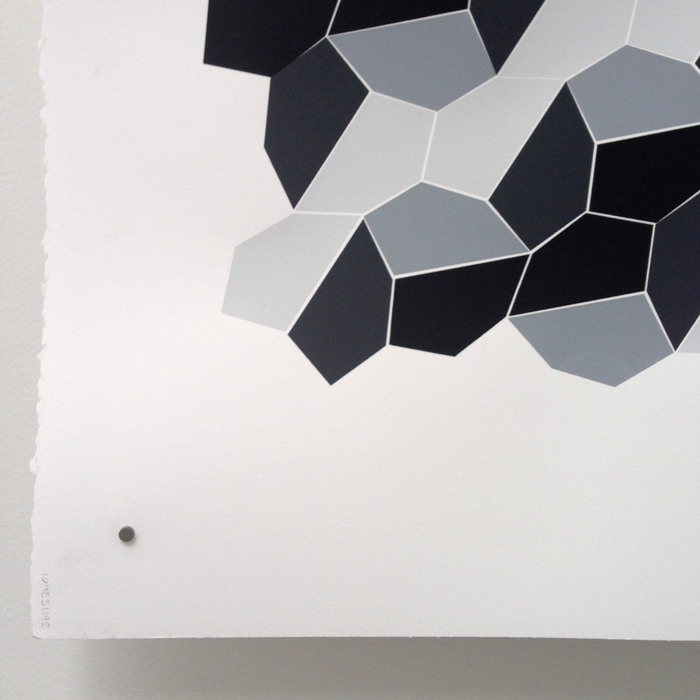 Evocative of honeycomb, Type 7 possesses a gray tessellation with a half-circle blemish and a penciled number: 104231z92. It is unlike all other pieces; it feels like the key. Type 7 (Broken) appears more whole than its name implies and more finished than its counterpoint. Its shapes fly as if a chain of birds, floating between diversionary shadows, beneath which their true shadow, curiously reverses course. Are they going, are they coming, or are they lost in transit?

Jan Tichy, On the Decomposition of a Plane, Type 7, Detail, 2016, Acrylic on paper, Courtesy of the artist, Photo: Kimberly Hahn.

Down the open hallway, an unceasing cycle awaits: a light to dark and light to dark as if a print developing in a tray, revealing itself, and lingering too long until overdone, at which point the process must begin anew. This darkroom chiaroscuro exposes the way in which the understanding of art and artifacts is manipulated by placement, lighting, spatial limitations, curatorial intention, and collecting practices.

Tichy’s video Installation #31 (Seven Seas) manifests as the room’s sole light source through 255 grayscale increments. As the shades become darker, the pictured impluvium’s sea mutates into envisioned imagery of amorphous clouds; a shadowy, horse-like spectre; a suspended city-ship; a starry galaxy and then . . .  nothing. The culmination of the video shocks with the jarring, harsh white of the beginning, the stark truth one would, sometimes, rather not see. 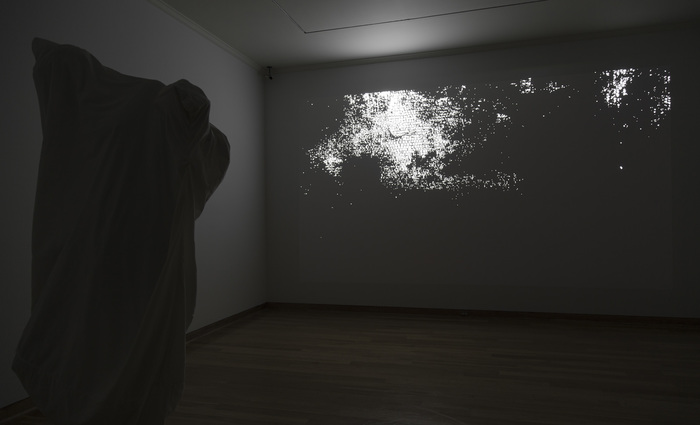 Even the museum gallery stores Charles Henry Niehaus’ work; though the video illuminates it, it never sees the light. Dark feet peek out from underneath a makeshift cloth covering, which hides an amorphous, hulking shape. While references to owned, but no longer relevant, vaulted artworks arise, so too it seems as if a person is being moved surreptitiously as commodity or, perhaps, to be saved from death.

In Winter Sunrise, Sierra Nevada, Lone Pine print, Ansel Adam’s glass-plate focus disappears as detail transforms into abstraction; only a pasty whitish stripe amongst black planes remains when the room descends into darkness. Its evocative isolation metaphorically relates to the conflicted context under which Adams shot it, while photographing a Japanese-American Internment camp, a place that he was, as a white male, free to leave to look for transcendent landscapes. 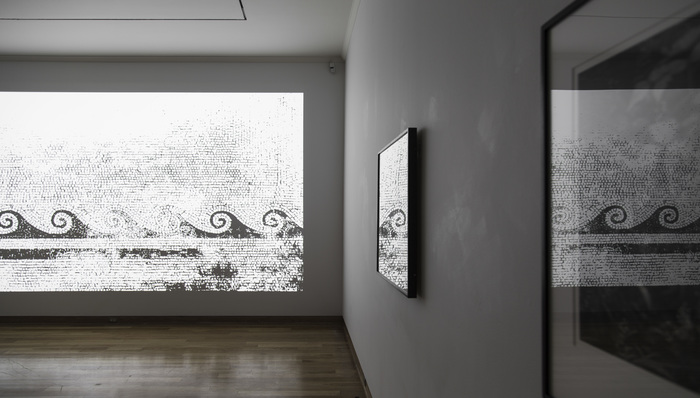 Tichy’s Seven Doors selection presents another aspect of museum collections by a palpable absence. Regardless of their privileged positions in society, women stay relegated as enablers, as donors; never are they makers. By acknowledging the patriarchy, Tichy highlights an ongoing dialogue impacted by historical museum collecting practices.

Seven Doors: Jan Tichy and the Chiaroscuro of Art Museum Collecting is on view at the Santa Barbara Museum of Art through November 27th.

Kimberly Hahn is an artist, photographer, designer, and independent writer based in Santa Barbara, CA.