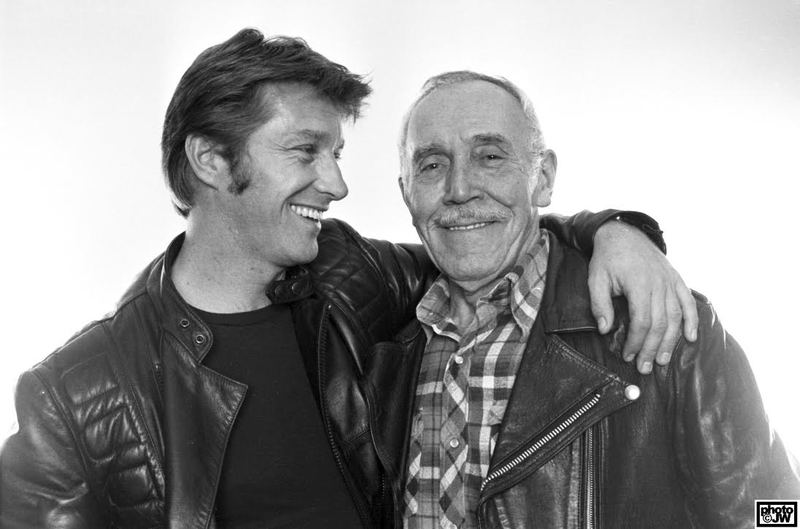 Meandering through West Hollywood’s crowded streets—filled with trendy boutiques, coffee shops, and upscale salons—it’s difficult to come across vestiges of the city’s queer roots. Long gentrified by high rents is a rich history ensconced in leather bars, tea rooms, sex shops, and the like. It’s a history that while obscured, is still vibrantly alive in the memory of Tom of Finland Foundation Co-founder, Durk Dehner. Since 1984, Dehner served as the official head of the organization meant to promote the work and aesthetic of Touko Laaksonen (aka Tom of Finland), the Finnish artist responsible for drawings and sketches of muscle-clad leather men that embody a pre-AIDS gay archetype. 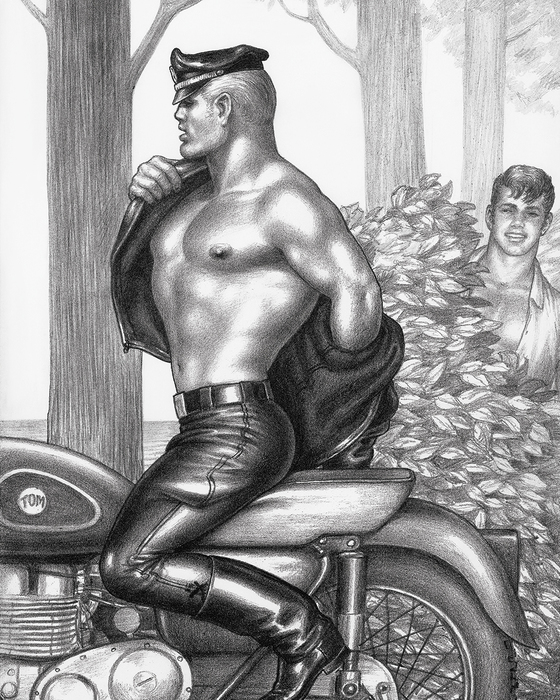 Dehner first came across Tom of Finland’s work in a New York leather bar. He was immediately captivated by the explicit imagery, fetishized depictions, and idealized renditions of the male form. It was something he’d never seen before and the work pierced him in a way no other piece of art had. Though not shown at a traditional art venue, Dehner knew he was gazing upon the work of an artist keenly aware of, and able to capture, the social-sexual milieu of the era. He wrote Lakksonen a letter and soon enough the pair were sharing Dehner’s Echo Park home. It was a complex relationship, built on friendship, collaboration, and mutual support, but also fraught with the unending tensions between artist and muse. 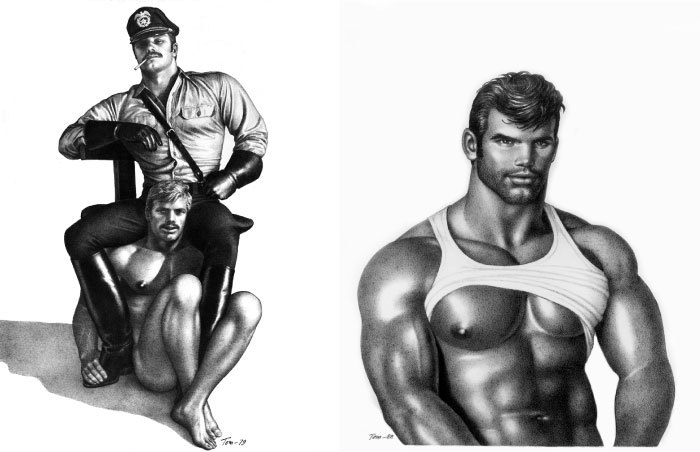 For years after Lakksonen’s death in 1991 the Tom of Finland name fell into obscurity, buried under the weight of the AIDS epidemic and its overwhelming effects on the libertine sexual atmosphere of the 1970s. The hedonistic days of consequent-free casual sex were over. In their place a more sanitized queer archetype took hold over the community.

Yet, for the past several years his work has experienced a resurgence, especially among younger men who matured in a world where preventative medicines are readily available. With the stigma and fear of AIDS long gone, and mobile apps putting casual sex right at their fingertips, gay men are undergoing a sexual revolution. The old norms are out and new ones are established daily. For the Tom of Finland Foundation the artist’s popular comeback translates into a wellspring of opportunities situating the practice in dialogues and spaces ranging from high art to kitsch. For the first time his work has been represented by major galleries and museums like MOCA-Los Angeles and New York’s Artist Space. Simultaneously, the recognition also spawned a number of product collaborations from rugs, t-shirts, plates, linens, sex toys, postage stamps, and even coffee.

Recently, they’ve collaborated with LA Pride for the festival’s art fair, entitled Cruising, curated by Nathaly Charria. While initial plans for the festival were met with a fair share of controversy from the local community, the organizers are unperturbed in their mission to queer public space, an endeavor deeply tied to Tom of Finland’s core guiding principles. On the eve of the festival I sat down with Dehner at the foundation’s Echo Park home to get his perspective on how the organization, and the art it supports, sits in the ever shifting dynamics of contemporary gay life.

Neil Vazquez: How did you first come across Tom’s work? What initially drew you to his images?

Durk Dehner: I was 26, so I didn’t grow up with his work. I moved to New York to become a part of the leather scene there and I won a contest at the Eagle’s Nest. At the bar next door, Spike, I saw a little ad with Tom’s work. I never had a piece of art affect me before, but I had a physical experience with it. I had to have it.

I showed it to a friend of mine, who was also an artist, Dom Orejudos (aka Etienne) who was a contemporary of Tom’s, and told me about him. [Dom] had Tom’s address, and I wrote him a letter telling him how much I loved his work. We stayed in contact and he would see my name and picture in different magazines like the Saturday Evening Post because I was modeling for Bruce Weber at the time. A year later I’d moved back to LA and he wrote me letter telling me that he was coming to town for a show at one of the local gay-owned galleries. I hosted him on his first trip. That was 1977, and in 1981 after coming back and forth several times he moved here with me. 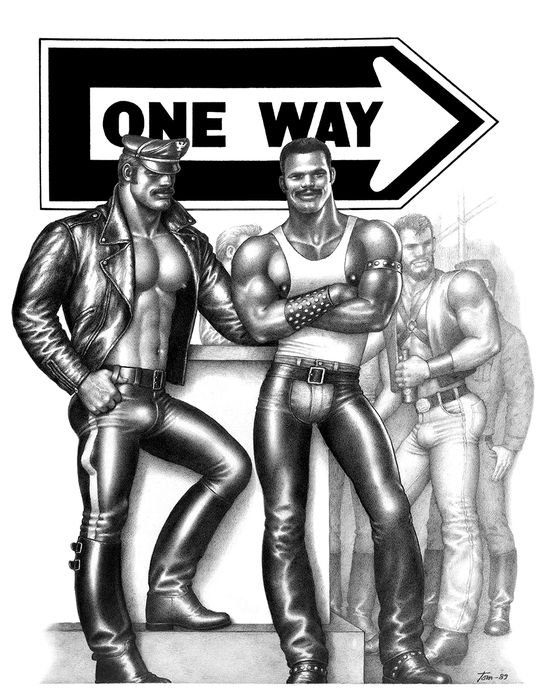 NV: What role did you play in his career?

DD: Immediately I realized what a big impact he would have on the community and how deeply he impacted their individual lives as gay men. I also saw how much he’d been abused by publishers who would reprint and copy his work without permission. So I offered, as a friend, to help promote him in America and it evolved from there. In 1978, I got him an exhibition in New York were he met Warhol and Mapplethorpe.

NV: How did Tom interact with the art establishment at the time?

More than anything Tom’s work stood for freedom. That’s the universal appeal. I was in Paris a couple of years ago for the opening of one of Tom’s shows and there was this stylish woman at the entrance looking into the show and getting emotional. When I went up to her she told me, “this man was truly free,” and I completely agree with that. 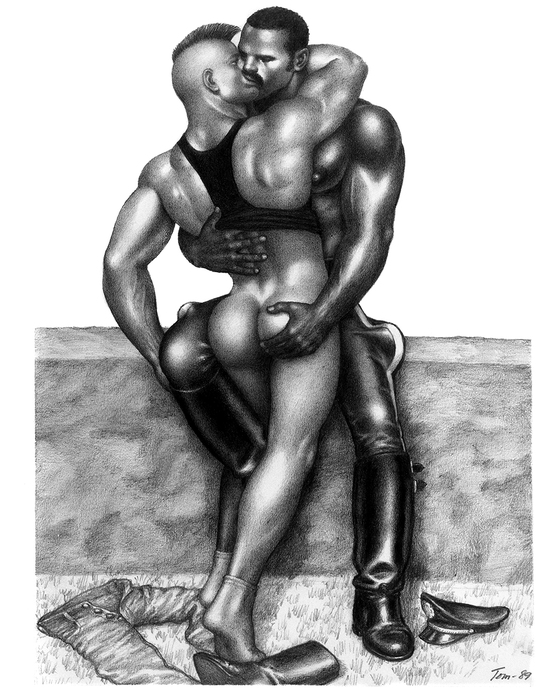 NV: What’s the appeal of leather?

DD: The pleasure of life is to present yourself in a different way, and see how people react to it. There are few things that evoke a certain sensuousness and mystique as much as leather. When you wear that hide you’re put in a different state of mind. When you put on a pair of boots you walk differently. Even on that level it’s one of life’s pleasures.

You wonder, though, if it will sustain itself. I was so surprised when I was in Europe a couple of months ago that black leather and jeans are in right now. It’s super trendy again.

DD: Well that’s a touchy subject in the leather community. There’s a difference between costume and gear. Costumes tend to be associated with parties, Halloween, and what not. Gear is something that is yours. If I give someone a vest or boots that belong to me, I’m not just giving them a used piece of leather; it’s an embodiment of everyone that’s worn it. When one man gives gear to another man, you’re getting something that has the energy of the person that came before you.

NV: How did the AIDS epidemic shape Tom of Finland?

DD: Before it we were freer than we are now in a sense. Now we have legal rights, but people are more hesitant to experiment and push boundaries. It’s not just sexual—you see it in art. Artists don’t make explicit pieces because they’re afraid they can’t sell them later on. It’s more of a commercial censorship.

NV: Do you think new medications, like Truvada, are somewhat responsible for a resurgence in Tom’s popularity?

DD: Yes, AIDS was a war and it happened. Everyone that survived it became very safe. Where we are now we don’t need validation, we need to explore where the parameters are. But it’s not just gay boys—Tom’s work has a mass message and appeal. The thing about it is that sexy never goes out of style.