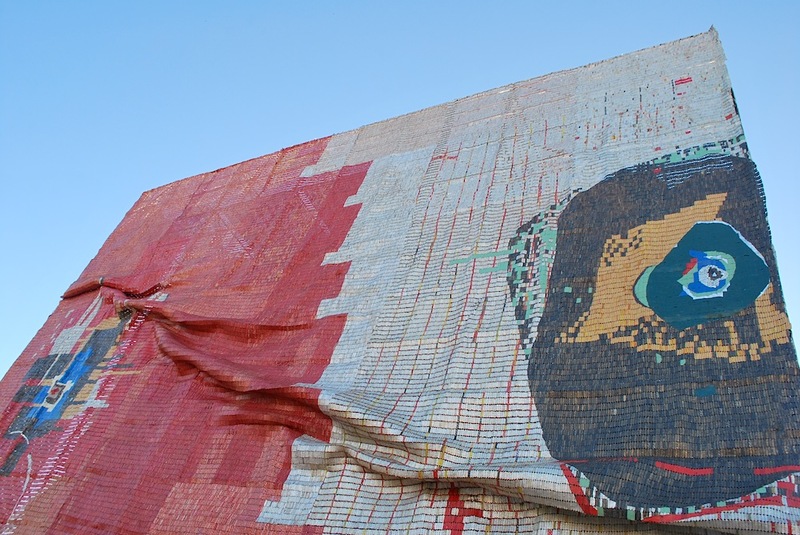 Usually, art world press conferences avoid politics, but for the opening of the 6th Marrakech Biennale, events like the Syrian refugee crisis were used as a starting point to introduce the exhibition, which kicked off February 23 featuring 50 artists across several venues of the ancient city.

“Art brings together people, not tears them apart,” said the Palestinian curator Reem Fadda, who is the Associate Curator of Middle Eastern Art for the Abu Dhabi Guggenheim. In her selection of artists from Africa, Europe, the Arab world, and their diasporas, Fadda calls the biennale and its signature exhibition a “living essay” filled with “living art” (instead of contemporary art).

The theme for the 2016 exhibition is “Not New Now,” which taps into the art world’s obsession with trends and newness—what the curator calls “hollow consumption.” This isn’t an art fair, though: it’s a biennale. “I chose the title ‘Not New Now’ because it’s a critical return to looking at our times,” said Fadda, “thinking of the legacy of modernity in the current moment and thinking productively but at the same time absorbing ideas about how we can focus on our present day.” 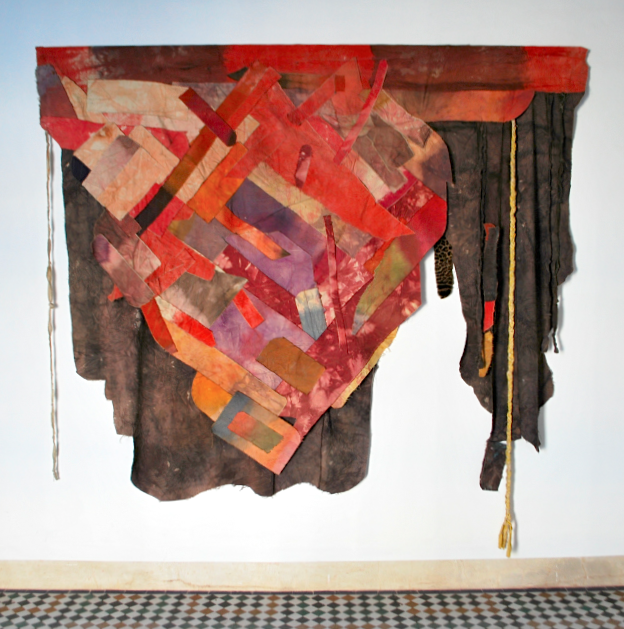 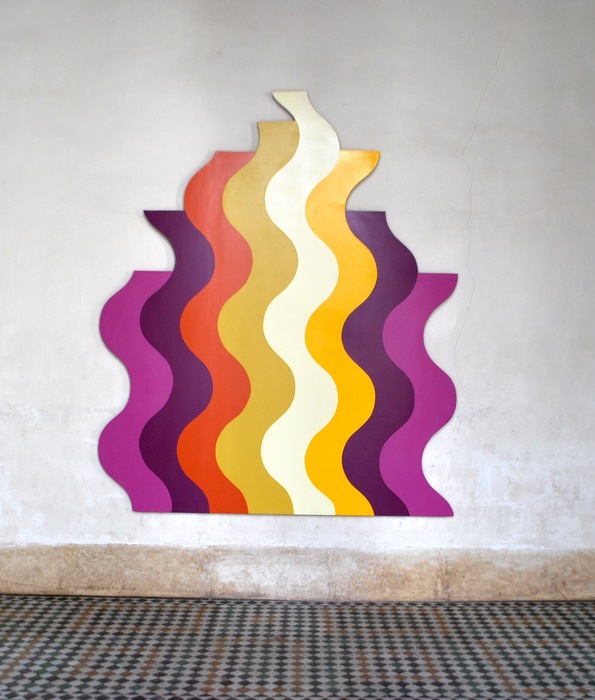 Since the present—or at least the concept of “newness”— is looked upon critically, the exhibition also looks to the past to understand its histories. The presentation includes abstract paintings from the 1960s and 1970s, which are part of the School of Casablanca, an overlooked movement of hard-edge painters who helped define modern African painting. The works are bold, colorful, and in the biennale they find kinship in African American modernists such as Al Loving, represented here by a hanging fabric wall piece from 1975, and Sam Gilliam, who shows a series of rainbow-hued, tie-dyed fabric pieces.

At the entrance of the main exhibition is what feels like an emotionally heavy piece by Algerian-born Belgian artist Eric van Hove, who recreated a model of the Caterpillar D9T engine that killed the American activist Rachel Corrie. The young activist was part of a pro-Palestinian group and was killed by an Israeli Defence Forces bulldozer in the Gaza Strip in 2003. “Political art should not forsake beauty,” said Fadda, and this work is a prime example: the engine replica, while conceptually loaded, is undeniably beautiful, covered in intricate, decorative patterns. 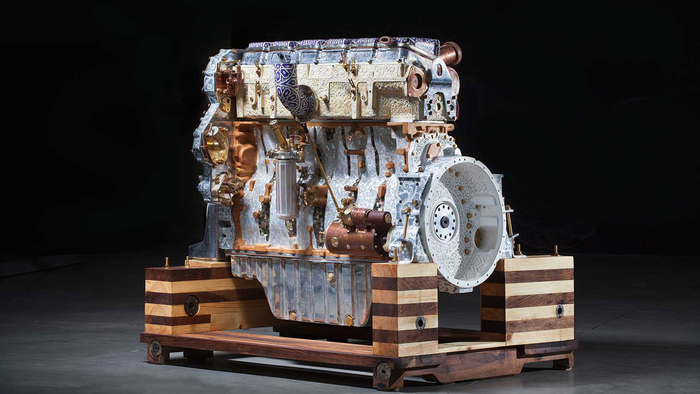 Van Hove’s sculpture is not the only tragic tribute to activists the show makes. Just a month before the exhibition opened, Morocco lost one of their finest talents. The photographs of Leila Alaoui, the French-Moroccan photographer who died in the Ouagadougou attacks on January 18, are on show to honor the photographer, as well as an open letter posted in memory on the Biennale website. On view are Alaoui’s portraits of workers from former French colonies in traditional headdresses. Alaoui died while doing advocacy work against forced marriages with Amnesty International’s My Body, My Rights campaign.

Throughout the exhibition were examples of how art is used for cultural resistance, like the survival technology of Syrian architect Khaled Malas, who created a windmill turbine made from recycled materials that provides electricity to a Syrian hospital with 60 beds. Here, his installation shows the windmill’s creation and puts it in the context of the history of Syria’s electric infrastructure. Malas says the windmill examines the current condition of the region and its changes. “It’s an opportunity to shed light on under-represented civil resistances that occur within the space of the everyday,” he said. “This windmill is a humble monument to our resistance and an expression of our hope.”

Tapping into the global refugee crisis, Kwassa Kwassa (meaning “an unstable boat”) is a 2015 short film by Danish art collective SUPERFLEX. The film follows a group of boat builders on the island of Anjouan, part of the Comoro Islands, off Africa’s southeastern coast. The fiberglass boats are used to carry migrants to Mayotte, a former French colony island which became a part of France again in 2014 after a 2009 referendum which voted in favor of the decision. Today it’s the outermost region of the European Union. Once the migrants arrive on the island, they hope to become European citizens and create a better life. However, over 10,000 people have died making the dangerous 70-kilometer journey. The film is narrated by a man speaking Comorian (with subtitles), who says if Africans never came to Europe, there would be no Europe. “Imagine you could enter Europe by crossing the sea, it is magic but not allowed,” he said. The story is left open-ended with an empty boat floating in the middle of the ocean. 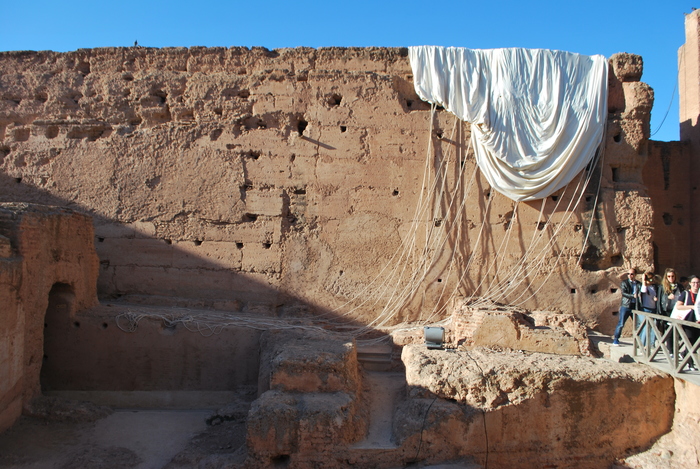 This question of space and belonging is shown in a large, deflated white parachute, entitled Safe Landings, created by Oman artist Radhika Khimji. Since parachutes only open in the sky, the artist is interested in their full visibility, as well as the concept of understanding what openness is when functioning between different places, even airspace. Where does one person “belong” versus another? Are we not all citizens of the world, or do we only “belong” to one country versus another? 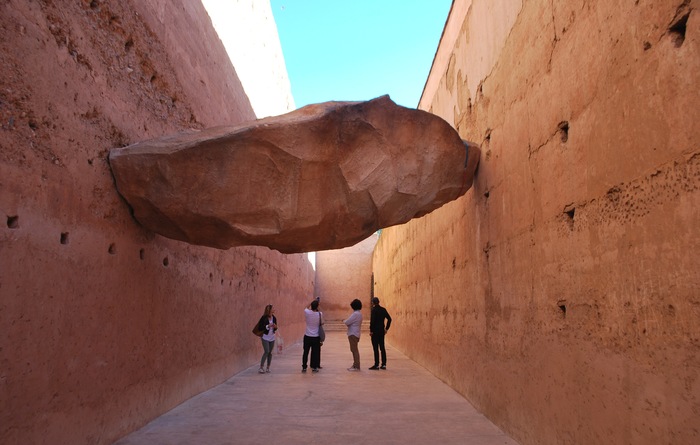 Fatiha Zemmouri, Sheltered... From Nothing, 2016, Polystyrene and plaster, 550 cm

There was also a public sculpture by Moroccan artist, Fatiha Zemmouri, who created a large, polystyrene rock wedged between the hallways of a heritage palace. Entitled Shelter from... Nothing, the foam material (often used in Hollywood films) suggests the feeling of being stuck in between two places. The work resonates with the exhibition's political refrain, signaling the refugees who arrive in Europe after a long, life-threatening journey, wait months on end before getting their papers, and still feel displaced, almost stuck, before moving onward to the better life a new country has promised them. 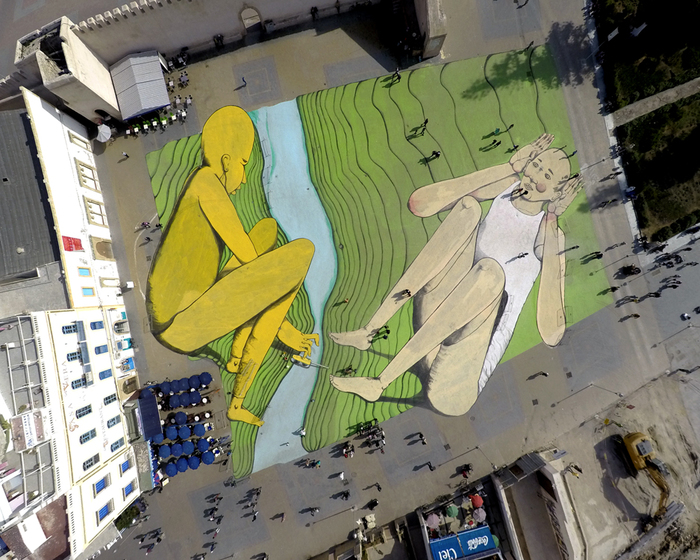 This year, the biennale introduced a new street art program as one of their satellite projects. In the city’s main square is the high-profile mural of two people communicating across borders created by Italian street artist RUN, which is the largest mural in North Africa. The other murals include works by street artists like Mad C from Germany, Alexey Lucas from Russia, and Sickboy from the UK. Eleven artists have their pieces up for three months, but the business owners can decide to keep the artworks up following the biennale. Street art seems to be flourishing in Morocco, as Rabat, the capital city, recently started a first-annual street art festival this year. 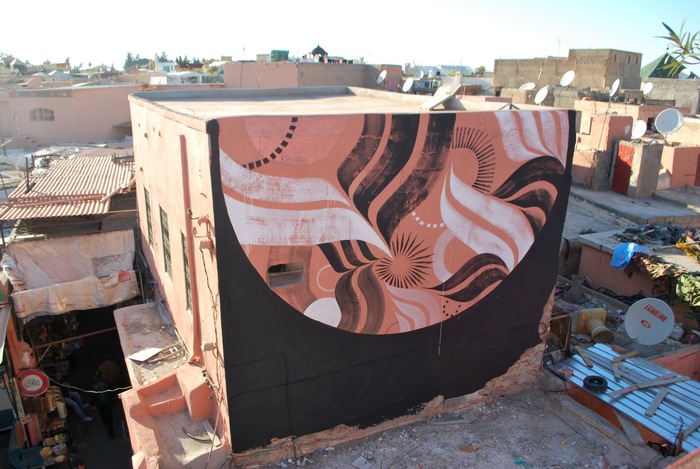 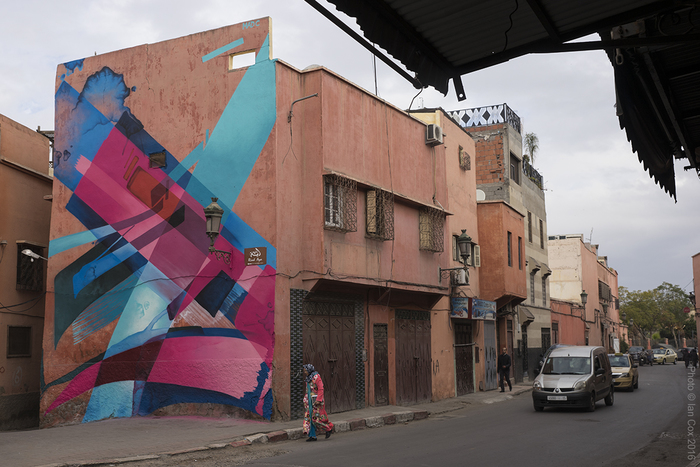 This is the first time street art has been allowed in Marrakech. “We made history,” said the street art program’s curator, Vestalia Chilton. The same could be said of the entire exhibition, which soberly looks to history to reflect on current circumstances.

The Marrakech Biennale runs until May 8 in various venues across Marrakech. For more information visit www.marrakechbiennale.org.

Nadja Sayej is an arts reporter based in Berlin and the founder of ArtStars*, check out her website at nadjasayej.com.

(Image at top: Work by El Anatsui outside the El Badi Palace. Unless otherwise noted, all photos courtesy of the author)