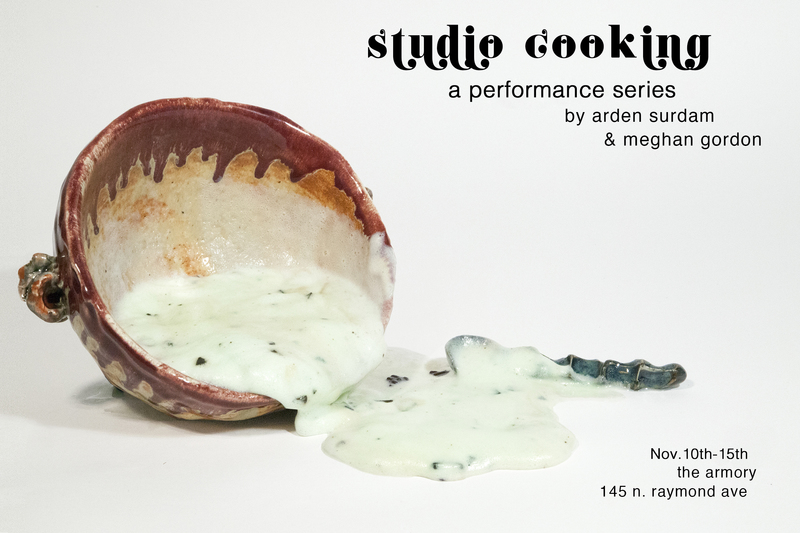 What Do Artists Eat? Studio Cooking Serves Up Performance, Art, and Your Next Meal

In 1990, Rirkrit Tiravanija dished out Pad Thai to visitors at the opening of his exhibition at Paula Allen Gallery in New York. It was a meal, and it was art—dematerialized and suspended in a web of social interactions. Today that ephemeral meal-artwork has achieved almost mythical status, living on as the standard bearer of what came to be known as Relational Aesthetics.

More than 20 years later, food, and the acts of making and consuming it, continues to be a site of meaning and relationships. We all need to eat, after all, and we find meals across the art world: from its biggest, most visible events—Tiravanija himself served up fusion snacks and “bastard Pad Thai” to Art Basel visitors in June—to its most intimate, unseen moments. Picture the young artist working out how to feed herself and friends in a tiny studio with no kitchen.

That vision of the artist, cooking in her studio with little more than a rice cooker, hotplate, microwave, and mini-fridge, is both a reality and inspiration for Studio Cooking, a new project that explores “how artists feed themselves while they are working.” For LA-based artists Arden Surdam and Meghan Gordon, who met at CalArts, where they had ample experience with studio cuisine, the social relations developed and nourished around food are fundamental. But in Studio Cooking, which launches this week, they move the discussion beyond the interaction onto the wider social implications of the meal, touching on topics such as intimacy, community, labor, gender, and wellness.

Studio Cooking takes place in the context of Parlor at the Armory, a residency program at the Armory Center for Creative Arts in Pasadena, organized by the Women’s Center for Creative Work. For their week-long residency, running November 10–15, Surdam and Gordon are transforming the WCCW Parlor into a makeshift studio kitchen, inviting like-minded artist-chefs to cook, prepare, and perform commissioned “meal-events.”

Before their studio kitchen opens tomorrow, the artists spoke with me about the development of Studio Cooking, how they view the relationship between food and art, and what’s on the menu this week. Bring your curiosity and your appetite. 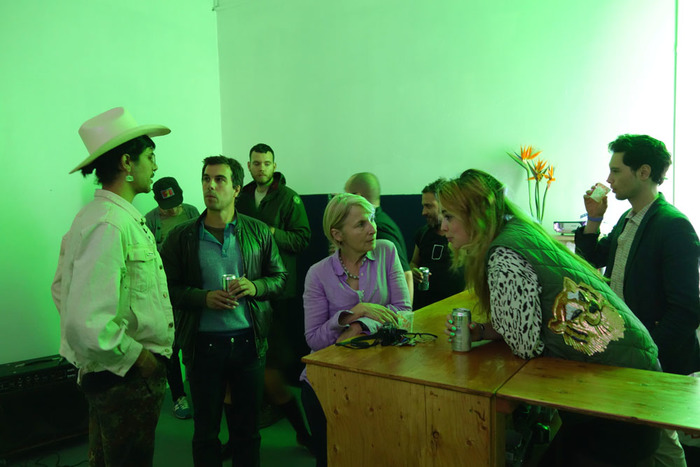 Andrea Alessi: How did Studio Cooking come about? Why food?

Arden Surdam: Studio Cooking was conceived in our studios at California Institute of the Arts. Meghan was running an illegal bar out of her space and living there and I was simultaneously photographing/working with food in mine.

Meghan Gordon: Your studio smelled like the inside of a compost bin.

AS: Haha, yeah, and yours smelled like cigarettes and beer. We would meet, have a drink, and Meghan would inevitably cook a meal in a toaster oven or a rice cooker because our cafeteria food was horrible.

MG: Yeah, the cafeteria sent 70 people to the hospital that year, but that’s another conversation. We soon realized how much our practices had become intertwined. I was running an independent lecture series with these huge dinners afterwards at Darcy Huebler and Luciano Perna’s house and Arden would make delicious and very cheap meals for restricted LA artist diets.

AS: We ate pretty well for two artists without access to a proper kitchen. And of course, we weren’t the only ones feeding ourselves this way. There is a long history of artists cooking in their studios and working with food: Daniel Spoerri’s snare pictures, Pierre Huyghe’s Monkey Waiter, Martha Rosler’s Semiotics of the Kitchen...

MG: ...Al Ruppersberg’s cafe, 17th century Dutch still life painting, and so on. We thought this collaboration, which we were essentially already in the midst of, should be formalized into a project.

AA: People are becoming increasingly aware of the ethics and politics underpinning what they eat. But it seems like you're taking the conversation beyond what we eat to its whos/wheres/whens/hows/whys. What themes, practices, and dialogues—art or otherwise—are you engaging with? And how are these reflected in the Studio Cooking programming?

AS: The dialogue that Studio Cooking generates is one that considers artists’ personal relationship to food as well as the performativity associated with the production of a meal.

MG: We document actual cooking in studios, commission meals, engage with artists who are thinking conceptually about food or using food in their work, collect recipes—recipes are performance prompts. In the context of the Japanese tea ceremony, there is a saying, ichi-go ichi-e, meaning “one time, one meeting,” or to put it more bluntly, that each moment is once in a lifetime. Aesthetically, it advocates for the importance of social gatherings, of meetings between people. The tea ceremony is kind of the ultimate performance art: highly mediated and simultaneously pretty banal.

AS: And cooking can absolutely be performance. Personally, I am also interested in the politics behind food, particularly questions like who has access to what food. But yes, Studio Cooking is more invested in expanding these ideas depending upon the artist and their practice.

MG: We kept returning to the most basic question: “What do you eat during a long day in the studio?” We talked about that a lot when our studios were on the same campus. When speaking more in depth with each of the artist-chefs participating in Studio Cooking at the Armory, we realized that this is actually a very individual response. The conversations included notions around hosting and favors, the amalgamation of cooking and image making, the relationship between food and memory, the development of community through eating and music, the transcendental nature of certain edible substances, and the intimacy associated with being fed by a stranger.

AS: Each artist’s relationship to food in the studio really served as an insight into their private, working process, into their personalities and values, and so a residency at the Armory would provide public access to this secret space. The Women’s Center for Creative Work named their residency after a Sheila de Bretteville essay called “The ‘Parlorization’ of Our Homes and Ourselves.” De Bretteville writes about the parlor as a politically charged “buffer zone” where women’s private, domestic space intersected with men’s public, secular space.

MG: And of course we are both interested in the display of all of the labors of the artist—casting resin might seem sexier than roasting a pepper in the toaster oven for lunch, but both are work. Just as being an artist requires a certain amount of business and administrative work (though perhaps not every artist is doing this for themselves).

AS: And all these different labors can function as performance.

MG: Absolutely. I’m interested in the performance of creating this context for other artists to work within, in giving value to part of someone’s practice that might not make it to the solo gallery show. Event programming is often used to spice up (pun intended) more conventional art spaces, but within our project our labor can validate another artist’s marginalized labor. 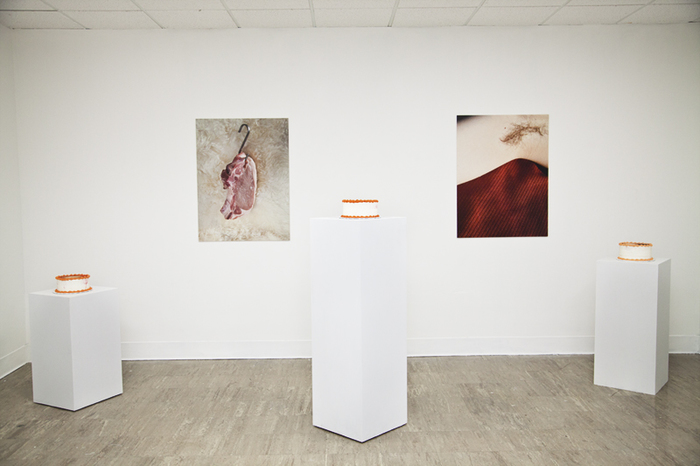 AA: For you, what's the relationship between art and food?

AS: Meghan and I deal somewhat differently with that in our practices. For my work, food connects in different forms. Most recently I’ve been using it as a tool to challenge traditional constraints of the photographic medium. In my latest series, I literally cook images in a Solar Oven that contains food and alternative process photo chemicals and later scan and enlarge these “food-photo” prints.

MG: The Sun Oven work is amazing! And I also loved your cake prints—we devoured them. People love to be served food at events. I deal less directly with food, but I am very interested in service. I still run the illegal bar, but now I describe some times as a performative project space that takes the shape of a bar. Basically, when I am offered a space to do some times, I collaborate with an artist on a project and the only parameter is that it contextually takes place in a bar, and I help plan, produce, perform, document, and promote the project. The last one I did was with Jeepneys (Anna Luisa Petrisko) at Museum as Retail Space here in LA. We created a performance based on the language of service, thinking about decolonizing hospitality.

AS: Besides our individual work, we have consistently agreed on the idea of cooking and eating as a way to nourish relationships. 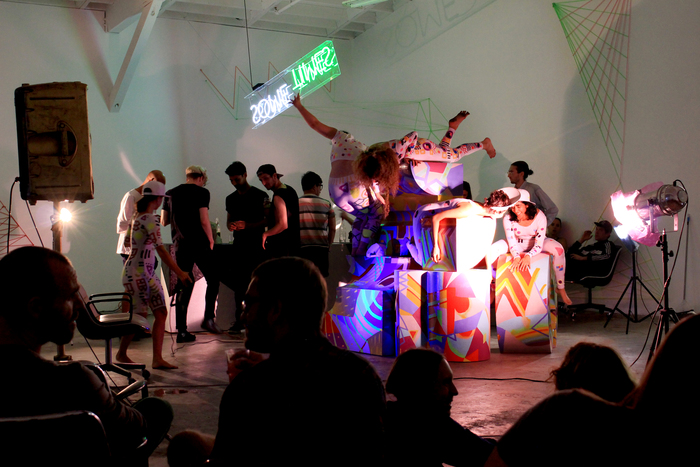 AA: Are all the events in Studio Cooking serving meals? Any hints about what attendees can look forward to eating?

AS: Absolutely. Our only request of our artist-chefs was that they serve something edible. Some of the food guests can look forward to includes boba tea, balut eggs, rice rolls, hibachi grilled meat, skewered veggies, bagels and lox, margarita pizzas, poached pears with red wine sauce, and homemade bread.

AA: Are there still spots at the events for people who want to sign up?

MG: Yes, but people should RSVP as soon as possible, because space is filling up! You can email us at: studiocookinginfo@gmail.com.

(Image at top: Poster for Studio Cooking. All images courtesy of Arden Surdam and Meghan Gordon)