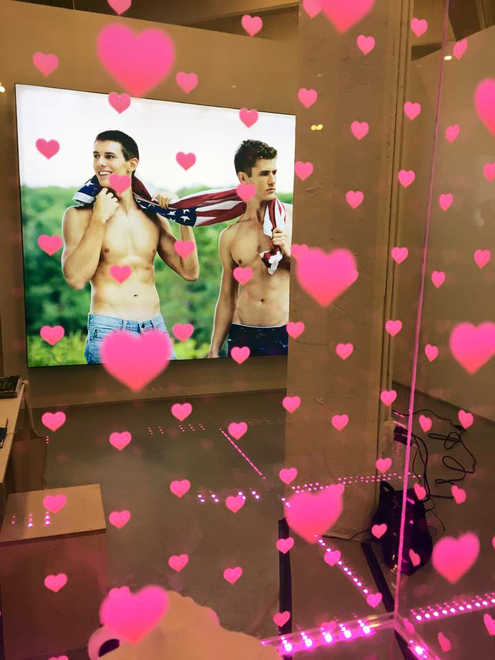 Playful? Or Childish? The Art We Deserve

Hopping around the fairs you start to notice some trends in material and content. We’ve noticed a healthy use of floral foam at Independent and Armory, rock-climbing grips as wall plinths, new-media on canvas, and a whole bunch of animated icons making their way into the pictorial plane. There is a lot of playfulness this year… but it’s all rather childish. 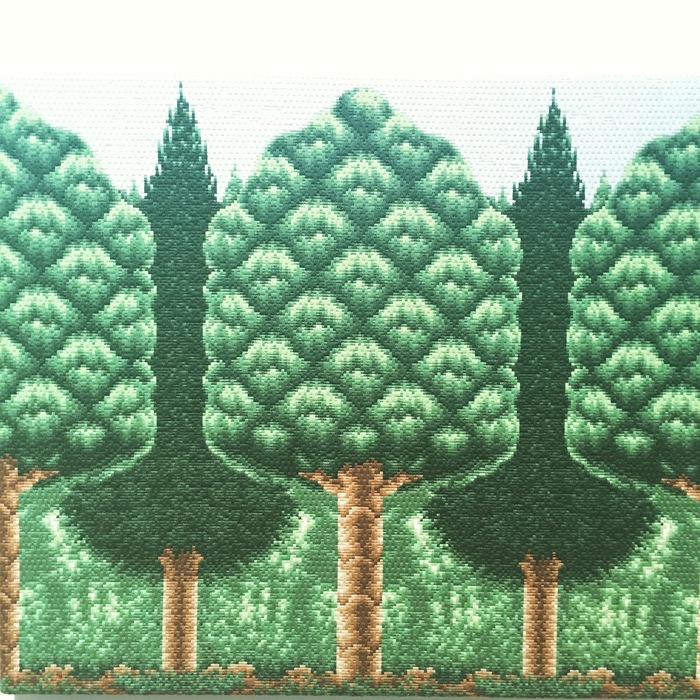 Per Fhager at Stene, exhibiting at Volta NY

On a far wall in the upper reaches of Independent, there’s a photo diptych, one half of which is an image of Diego Rivera’s Detroit Industry fresco at the Detroit Institute of Art. I had one of those moments when you get lost in a work, feeling it with my eyes, searching it and gleaning as much information and affect as I could. A few minutes went by and I snapped out of it. I looked around and a wave of despair lapped at my toes. I had come to the end of Independent and was circling back down and I knew there was nothing here that was going to affect me like that one photo reproduction had. It had gravity, it had weight, it reached for universal truths of humanity in a moment of great change. Its heroism left me feeling inadequate and empty. 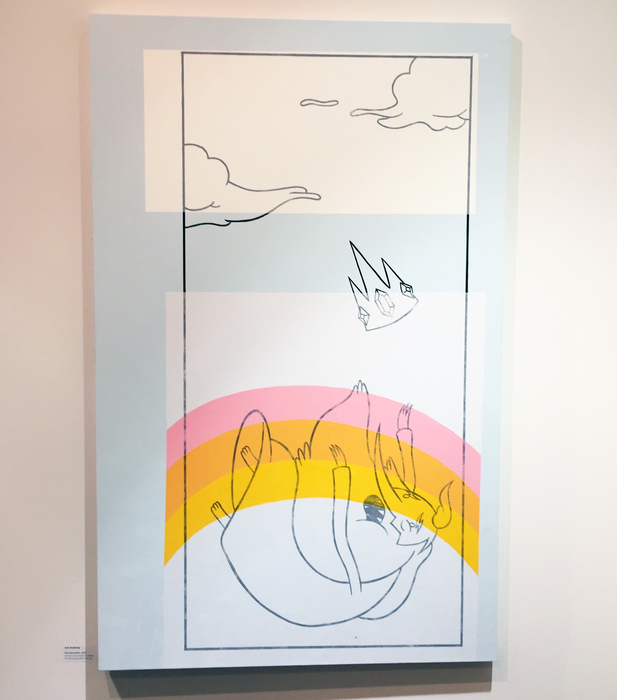 We are at one of those great transitional moments now; the anthropocene is evident and technological change is fast approaching exponential expansion which may cause a complete shift in the definition of what it means to be human—and all we get are a bunch of childish remembrances. Vapid references and solopsistic nostalgia abound but you can’t blame the art or artist. It is, in a very cruel way, the art we deserve.

Given a lack of counter-ideologies, anything that resists capitalization is labeled as sentimental and therefore loses affective traction for the majority of viewers. We’ve been conditioned to reject the sentimental and compartmentalize the heroic so that it cannot apply to personal experience but is rather outside of ourselves. Production within this system then relies on quick apperception and I mean quick. We expect instantaneous relation and instantaneous gratification, not the gratification of contemplation and growth.

It is no one’s fault—and who is to say it is even a negative that we prefer our relationships with objects of culture to be fleeting and innocuous? I perceive this shift as negative because it is in opposition to the mores I was raised with and attached my self-worth to but this acknowledgement dismisses any negative feelings and now I am the perfect receiver for this childish art—a tabula incompletus, waiting to be filled with new formulations of knowledge and relation. This was the point of postmodernism, to wipe away the old systems in favor of new formulations that favored new values of equality and flattened paradigms of power. Post-postmodernism was heralded as a new beginning but all we get is some childish art with semi-sentimental references. 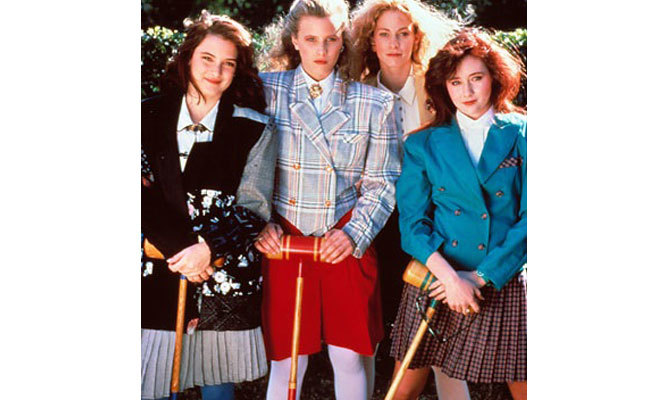 Promotional image from the movie Heathers, 1988

Heathers, starring Winona Ryder and Christian Slater, told a dark tale of a murderous high school duo disaffected by 1980s suburbia and croquet. Jeanette Mundt, represented by Société at Independent, produced three monochromatic paintings of three girls holding croquet mallets behind their back like the popular girls in Heathers, threatening but innocent. On the adjoining wall hangs a large print (image at top) of American males that look ripped from an American Eagle catalogue by Timur Si-Qin from his Premier Machinic II Memorial. Perfectly paired with a transparent heart box from Refraction. The Image of Sense series, an odd tension of teenage girl affect is touched and then left. Connections to Tiger Beat, Heathers, American Eagle, heart emojis all pop up—“related content”—but the grand narrative is missing. The pieces don’t fall together and I feel neither empowered nor validated. I feel childish.

Armory Arts Week: Your Guide to the Fairs
3/2/15
COMMENTS (4)
Let's Learn From the Russians
Thank you for publishing this article, I find it puzzling to a certain degree especially the last paragraph, be that as it may. I am an artist and graphic designer and have a background as well as interest in art as a natural a byproduct of my being. However, what I can appreciate about this article, hopefully without being too negative. The trends of childishness have long been evolving in the established, culture halls of the art world (art fairs, museums etc). All of the butt plugs, body fluid paintings in menstrual blood and semen; the special focus on girls with mallets in their hands and all the rest of art that is ridiculous, vulgar and very, very sad. I am not Christian but it reminds me of those people in the Bible who built their golden calf and had so many orgies they didn’t know what to do with themselves after a while. I am not a scholar. I am also not an art historian. I consider myself a humanist, and your article today has an interesting, humanist slant that is not often seen. You write with a sentimental edge that was well appreciated. I agree that we get the art that we deserve but perhaps even more important, why do we continue to be denied the art that we deserve? Will the curators of the future and others with the influence to create a better picture for us for our young race who deserve the best, and raise the bar toward beauty and excellence? When ugly and vulgar art becomes tasteful, in the sense that it is applauded, rewarded and brought before the public who deserves so much more, we have a real problem. Can we recognize a Michelangelo? Pablo Picasso almost did not make his contributions. The greatest artist of a century and beyond, the Paris salons were too involved in showcasing artists whose work wound not endure. Let’s be like the Russians. The Russians supported Picasso by buying his earliest works. They saw his genius. They favored him over the petite artists in the Paris salons. Let’s present artists of caliber...
Comment by: Joyce Dade on Thursday 03/12/15 at 3:06 PM
Can We Learn From the Russians?
put a stop to the focus on celebrity that is not worthy of our attention. Otherwise we lose, we lose oversight of the art that is worthy of our attention and applause. Value is degraded when we get butt plugs and other vulgarities we could easily do without and then the question arises. Don't we deserve something better, something of beauty? We need not have a curatorial background or degree or even knowledge of the obscurities of the fine arts to know, beauty, meaning; qualities of timelessness, and art that relays these qualities and other universal values should be on the walls and in the halls and venues and galleries and museums. More often than not, the art is childish in the worst possible sense. Picasso when he was childish created masterpieces. What did the Europeans have, in Italy and elsewhere around the world, that we do not have here? Who is to blame for the dumb down? Someone needs to take the blame. We deserve better. We deserve more. We need to ask ourselves how long will this childish concern with body fluids, butts, girls with the suggestion of bad intent nonsense - how long will the purveyors of culture present this to us? How long did it take Europeans, the Italians, the Egyptians and others to build their culture of beauty that extends everywhere to the everyday in every way? Can we learn from them? They may have their butt valves too, but only a few I am sure, and perhaps with that being the case, they can afford them. We however cannot.
Comment by: Joyce Dade on Thursday 03/12/15 at 3:05 PM
Childish art
I think there needs to be more cheerful art. So much art is depressing or has a political statement. Maybe childish art is really cheerful art in disguise. www.mypodshots.com
Comment by: Mark Connelly on Saturday 03/07/15 at 2:17 PM
PLAYFUL? OR CHILDISH?
NEITHER ... IT'S BROMANTIC.
Comment by: Richard Lund on Friday 03/06/15 at 5:39 PM
ArtSlant has shutdown. The website is currently running in a view-only mode to allow archiving of the content.