Paris Dispatches is the blog of ArtSlant's Georgia Fee Artist in Residence, Brett Day Windham, who will be undertaking her residency in Paris during January and February 2015. She will be using the blog to share her process, work, and experience throughout the residency.

Georgia Fee Summer 2015 Residency Session is now accepting applications. You can find more information about the residency and how to apply here. 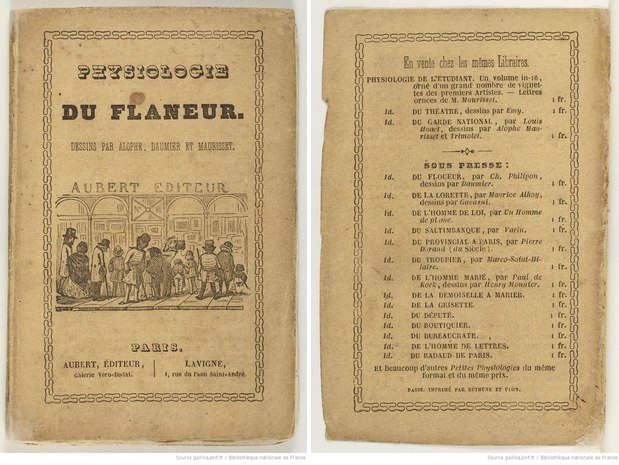 Front and Back Covers for Physiology of the Flâneur, Louis Huart, 1841 Source: Gallica.bnf.fr, National Library of France

Describing The Flâneur (as I have been asked repeatedly to do throughout my project, and rightfully so) is a complex proposal. Now, nearing the end of my residency, after all my exploring and reading and trying to understand the history of this city, I feel more adept, more up to the task.

There is no exact English translation for flâneur, probably because we’ve never had need for it. The ideal flâneur is male, and well educated. He is rich, walking the streets and observing the crowd instead of working at a traditional trade. He is not adverse to working—as long as it is in an intellectual, creative capacity. He is always beautifully dressed, with the appearance of a dandy, but ultimately not with the superficiality that word infers. He is self-possessed, retaining a calculating distance from all he purveys. He is an intellectual, deriving poems, prose, or paintings from his observations. He doesn’t check a map, or have a destination; he slowly combs the city to understand it, to examine its beauty and complexity. There are offshoots of the ideal flâneur (flamboyant, badeur, chiffonnier, sapeur, charlie, and more), but this is the essential profile, as intended by Baudelaire and Benjamin alike. Following are but a few of the myriad examples:

Flâneur (pronounced: [flɑnœʁ]), from the French noun flâneur, means "stroller," "lounger," "saunterer," or "loafer." Flânerie refers to the act of strolling, with all of its accompanying associations. (Wikipedia)

That kind of man [the flâneur] is a mobile and passionate daguerreotype who retains the faintest traces of things, and in whom is reproduced, with their changing reflections, the flow of events, the city's movement, the multiple physiognomy of the public mind, the beliefs, antipathies, and admirations of the crowd.

The flâneur, the purposeful male stroller, was a principal performer in the theater of daily life in Paris in mid-century, if we judge by his importance in writings of the era. A journalist, writer, or illustrator, he looked about with the acute eye of a detective, sizing up persons and events with a clinical detachment as though natural events could tell him their own stories, without his interference…this modern Parisian (had) objectivity and a devotion to contemporary life.

"A botanist of the sidewalk"

Last week, I had the pleasure of taking a short walk to the Place Des Vosges and Village Saint Paul with Canadian expatriate filmmaker Matthew Lancit, who has been working on a film about the flâneur for the past year. His reading and research go deep, and he expanded my views on ideas of Flânerie from Walter Benjamin and Susan Buck-Morss to Louis Malle and Joseph Roth, et cetera. We discussed the possibilities of acting the part of the flâneur without nostalgia, whether two flâneurs can walk at length together, and what flânerie is... because one can’t walk the streets, thinking and composing all day and night, for a lifetime. What are we when we are not flâneurs? Can women be flâneurs? As with any good philosophical topic worth its salt, our questions tended to raise more questions.

Ultimately, I think we agreed that Flânerie is a state of mind which one slips in and out of. It is as Walter Benjamin proposed: a dream state, an intellectual state, a perceptive state. In a busy, expensive city filled with tourists, the notion of moving through (arcades) crowds on the street—watching and internalizing—has changed (except perhaps at the outdoor markets of Paris). Even so, I agree with him that if we hunt the peripheries, flânerie is still possible. On our own walk, we discussed the addictiveness of forward motion, and our mutual irritations of having to stop to eat or rest.

The day after our walk, Matthew surprised me with two incredible “top ten” lists, which he characterizes as:

Ten books and ten movies that have most strongly influenced my conception of flânerie. I have avoided more academic works by people like Georg Simmel, Siegfried Kracauer, Susan Buck-Morss, the psychogeography of the Situationists, etc. in favor of more literary works, which perhaps offer something less informative but ultimately come closer to re-creating the sensation of flâning. Furthermore there will surely be works left off these lists because I have not read them yet (Georges Perec, Patrick Modiano, etc). And then there's people I just didn't have room for on a list of ten (Franz Hessel, Gérard de Nerval, Joseph Roth).

He goes on to further bemoan the many references and influences omitted by his self-imposed limits, listing too many for me to recount here. He invites readers to use the comments section to add to these lists—and I agree!

Without further ado, here are Matthew’s essential books and films.

Unlisted bonus book: For those interested in Paris, one book that should be on this list because it is one of the most comprehensive histories I've read of the city and because it is itself something of a flânerie in itself is Eric Hazan's The Invention of Paris. The author was kind enough to take a filmed walk with me around La Chapelle, one of our mutual favourite Paris neighborhoods. Here is an excerpt from that walk which did not make it into the final film:

Coincidentally or not, I have marked the flâneur's fade out of existence as being around the same time as the birth of cinema. Surely, the boulevardier could exchange the spectacles of the street for those flickering before him on the screen, but how to bring the urban spectacle—which is not the same as the planted sideshows lined along the Parisian boulevards—into the movie house?

I have a lot of reading and watching to look forward to, and plan to add my own list of favorite flâneurs soon—though I can’t promise a tidy list of ten, or that I’ll stick to one category. I will also bring women back into the conversation a bit, though my work and the art actions of my project say more about feminism, the laws and time we live in, and misogyny, than anything I can write. That’s the point of my project, after all: to make a work that stands succinctly for all these thoughts.