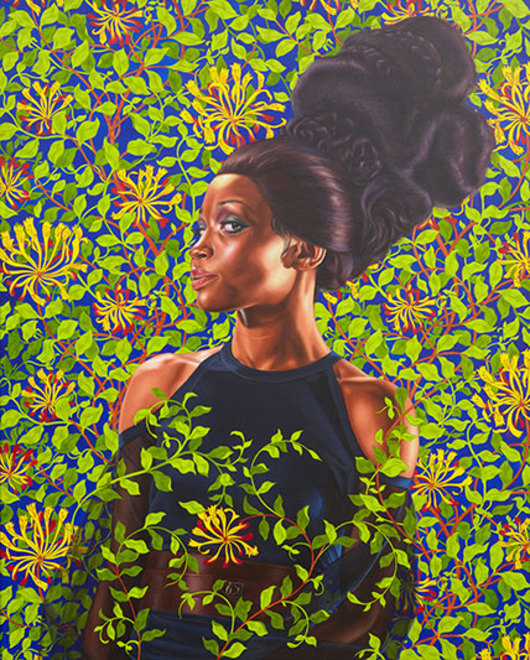 “Kehinde Wiley is everywhere right now,” said Eugenie Tsai, John and Barbara Vogelstein Curator of Contemporary Art, Brooklyn Museum, as the small press tour began. This was not an exaggeration by any means; Wiley garnered recent attention when his paintings appeared as backdrops in Fox's Empire, a highly stylized melodrama from Lee Daniels and Danny Strong that collages black stereotypes while positioning black bodies into a King Lear-like drama, and for his fashion week photoshoot with New York Magazine. Wiley has been an art star since the mid 2000s when his masterful paintings of black men posing in the tradition of classical portrait painting first began making the rounds, yet he is certainly having a moment right now with the opening today of the largest survey to date on the 37-year-old artist at the Brooklyn Museum. New works include masterful stained-glass portraits from Prague and appropriated from Christian chapels, bronze busts crafted in China, and a selection from his series An Economy of Grace. 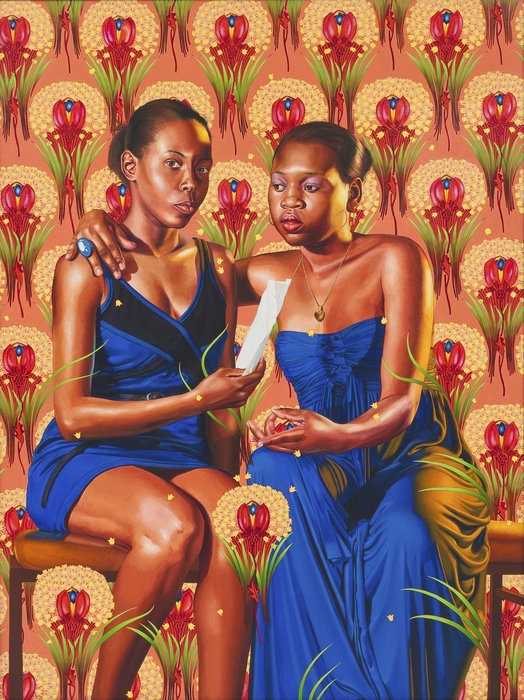 As many critics have noted over the years, Wiley is well-packaged. A young black artist from a disadvantaged background, raised on the mean streets of LA by a single mother, etc.—Wiley fits the narrative. His practice of “street casting”—where he asks people he sees on the street to select poses to inhabit from the art historical canon—as well as his brilliantly-direct practice of inserting black bodies in poses of power and affluence is often derided as too easy. It is easy, but it should not be disregarded. New York Times Critic Martha Schwendener is not a fan, and has on multiple occasions dismissed the premise behind Wiley’s paintings while refusing to go into the intricacies of black male identity that his work takes on. In one of her shadiest rebukes, Schwendener uses Wiley’s premise itself to discount his project:

From the outside, the problem might seem merely that Wiley's genre is stale. He's coming late to the game of figurative art; what he's doing isn't particularly new or interesting, except that he's depicting African-Americans and Africans instead of white Europeans.

Schwendener goes on to point out that Wiley isn’t the first to insert black bodies into the Western art historical canon—Barkley Hendricks was doing this back in the 70s to much more controversial effect. But who really cares about firsts other than historians? The contestation of black identity within a visual culture of white supremacy—it takes a lot of visual repetition to inscribe the black body with violence and danger—must be an ongoing project. 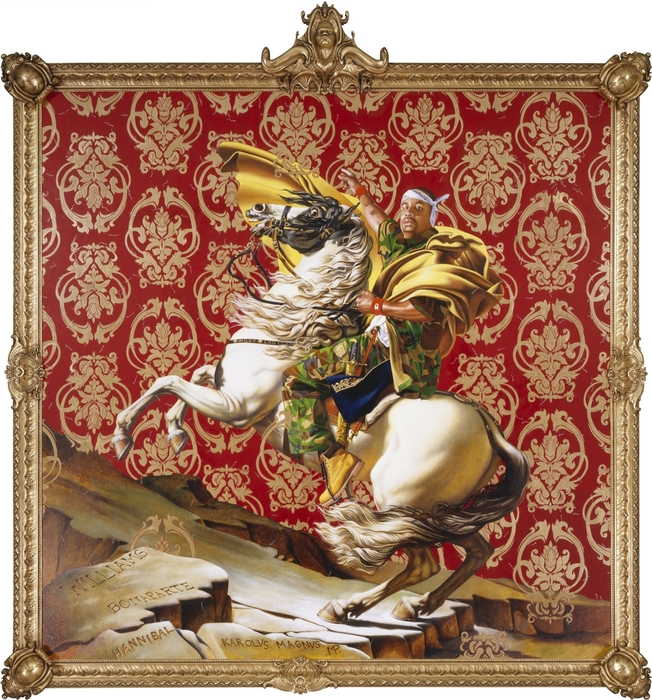 The criticism of Wiley as "too packaged" betrays a lack of nuanced understanding behind the project itself—for it has an agenda far beyond the art world. His brand drifts between confrontational and consumable and his prior use of only black male bodies as his subjects (An Economy of Grace, focuses on the black female body for the first time in his practice) reveals the artist’s intention of remaking the brand of the black man in Western society. Wiley’s work is consumable and it needs to be if it wants to be successful at more than finding its way into museum collections and TV-mansions.

The concept and practice of branding is practically synonymous with self-identity in a culture that primacies the visual the way ours does. Brands can elevate; they can evoke power, affluence, and class, but they can also denigrate. A particularly detached marketing executive might say that “the black man needs some rebranding.” Wiley’s project is just this: an extensive rebranding project that hinges on the deep, racial assumptions within American culture. A representative study Wiley painted in 2006 is on view in The New Republic: a careful painting of a young black man on a white background. Underneath his image is a set of large, white-washed numbers that indicate the painting is of a mugshot. Wiley says he found the mugshot crumpled up on the sidewalk one day and the young man’s image struck him: his softness, his vulnerability. This point of view is where Wiley diverges from popular culture. 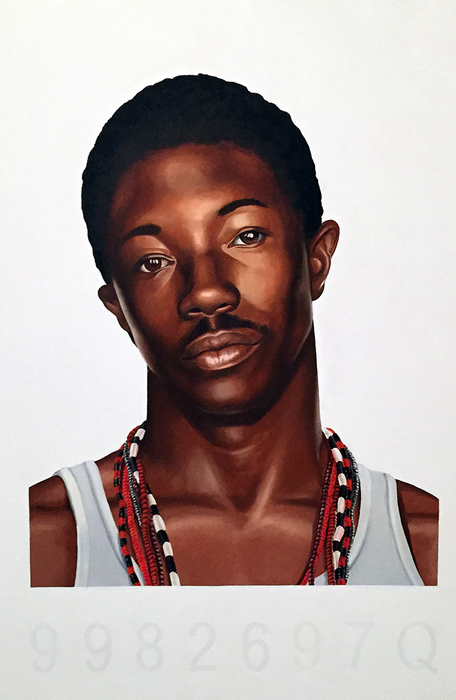 Herman Gray, Chair of Sociology at UC Santa Cruz, puts it succinctly in his essay "Black Masculinity and Visual Culture": “Self representations of black masculinity in the United States are historically structured by and against dominant (and dominating) discourses of masculinity and race, specifically (whiteness).” This posturing counter to the visual hegemony of whiteness led to the seemingly mutually beneficial “thug/gangsta” trope where whiteness can accept the black body as outsider and criminal and the black subject can enact resistance and participate in self representation.

Empire engages with these tropes melodramatically, portraying a black hero who rose to the top through breaking the law and sometimes murdering his closest friends, or as it is characterized on the show: “hustling.” The fine line here is between a portrayal of very real life experiences for many oppressed and marginalized people and the reification of damaging stereotypes, a line that is echoed in feminist debates on self-representation of the female nude. The brilliance of Wiley, for this writer, is that he is able to redirect the discussion towards vulnerability and stage that vulnerability as power.

Wiley’s New Republic is an empire of vulnerability as strength.