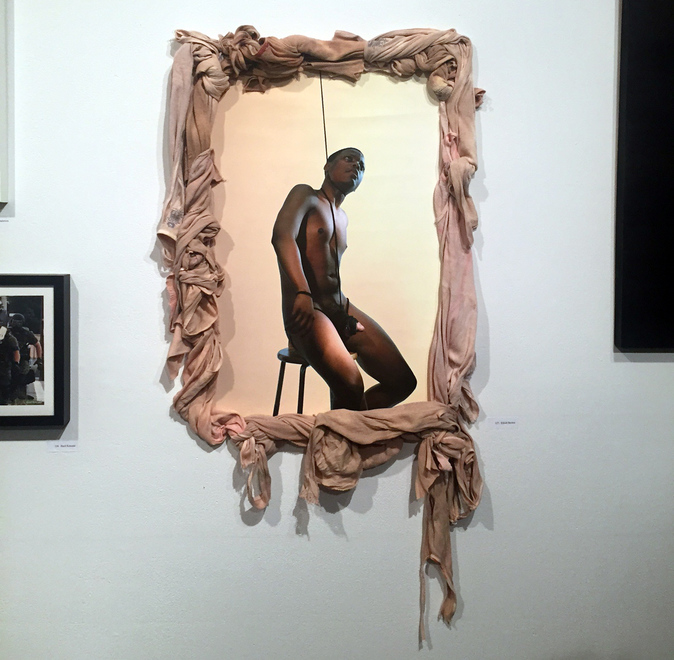 There is no better point in time to enact change than during a cultural rupture. Popular culture—the expressions that bind a collective group—is a smooth stream of images and ideologies that flows at an overwhelming and indomitable rate. This is part of the mandate of contemporary culture: to express with as many images and words as experienced time will allow.

Smack Mellon, a New York venue in DUMBO that supports emerging and underrepresented artists put its exhibition schedule on hold this month to present RESPOND, an exhibition in reaction to the nonindictment of Daniel Pantaleo, the Staten Island police officer who murdered Eric Garner. Opening night saw lines around the block and a packed gallery for the salon-like exhibition. Artists from around the world responded to the open call the gallery put out on the heels of Pantaleo's nonindictment and the exhibition is at once sobering and jubilant. It exhibits, with force, an imaginary that confronts head-on a unidirectional, racist regime of popular images. 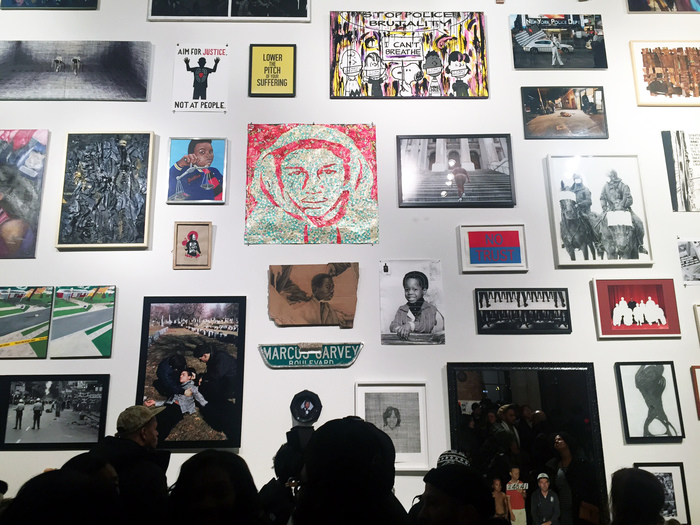 Installation view of the main gallery

Pop cultural representations are often just memetic iterations with slight alterations. As such, most culture serves a single purpose: to reinforce the social relationships and ontologies existing in that moment. Culture is often still unidirectional—that is, it moves vertically from the top down—despite the burgeoning flatness—the horizontality—of production online. The reality of Black Twitter goes to show just how necessary a popular culture grounded in the experience of blackness is, along with its ability to be given flight by horizontal networks of communication. Because of this flatness of production, cultural ruptures will be more frequent and more widespread. The unidirectionality of popular culture will be challenged more and more as it becomes more multidirectional and the hegemonic voices of the few become drowned out by the establishment of the many. RESPOND begins to do just that. 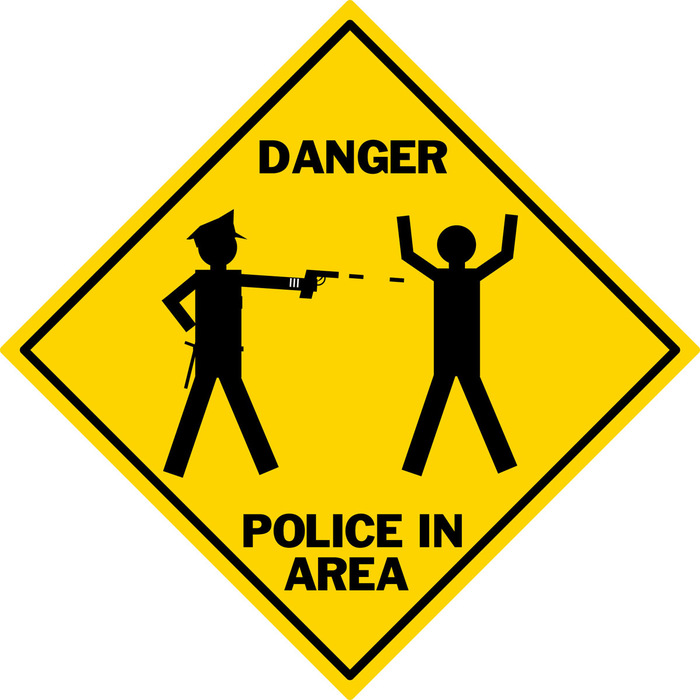 Some of the artworks like Dread Scott’s Sign of the Times, 2001, and Mel Chin's Night Rap, 1993, were not made in response to the recent cultural rupture but address the issues of police brutality and racism more generally. Though their inclusion could be questioned in an exhibition entitled "RESPOND," they do serve to remind us that counter-imaginaries have existed in the past and persist today.

Most works in the exhibition directly addressed the deaths of Eric Garner, Michael Brown, and Trayvon Martin. In the annex of Smack Mellon, a more intimate installation housed some of the most enduring artworks. One of the most powerful was a painted transcription of Eric Garner’s last words by Atikur Abdul. 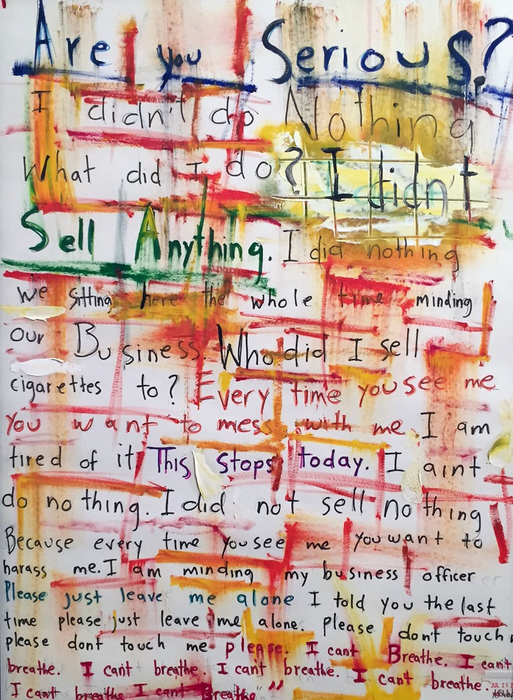 To the right, in a small shadow box, an intaglio printed feather bore a face, eyes closed, lips parted in a moment of exhale—ecstatic and moribund. Ann Johnson’s series of feather prints recall a lightness of being that directly resists the heaviness of the oppressed experience. Originally paired with a video of people from her community telling stories from their lives, this single work from her series Suga Blue finds new prescience within this context. 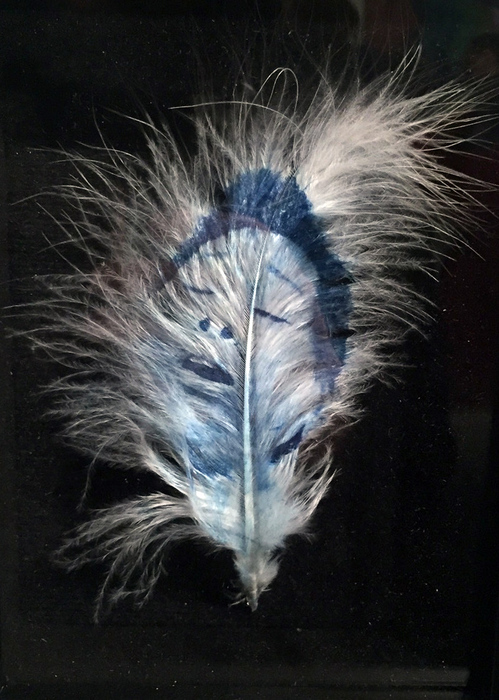 Continuing in a clockwise fashion around the annex, I came upon Megan Tatem's pretty fuckin' awesome work, MFNLU, which paired Michael Brown's defiant high school graduation photo with a quote from Drake's hit song "Worst Behavior" from his coming of age album Nothing Was the Same. The layering of Michael Brown's graduation picture and Drake's lyrics perfectly insinuates the emotional posturing needed by the oppressed. The Making-It experience that Worst Behavior represents becomes at once allegorical and satirical. Making-It provides the dream of acceptance while the extravagance associated with Making-It exhibits the seeming impossibility of escaping oppressive circumstances. 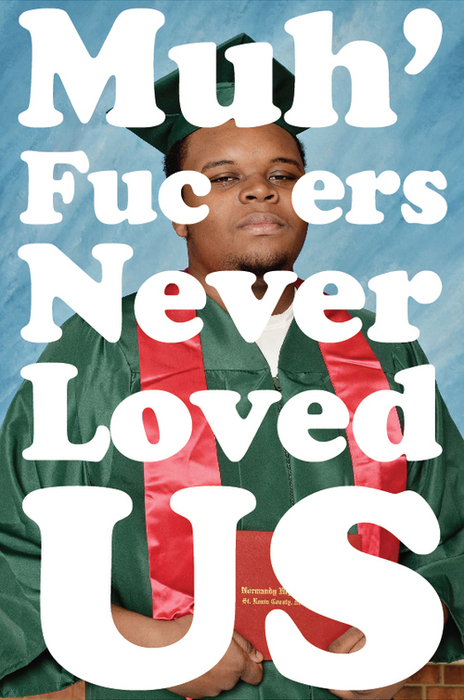 Megan Tatem, MFNLU, from the series Identity Crisis, 2014; Courtesy of the artist

A photographic work by Elliott Brown (image at top) is hung framed by dirt-dyed and worn white undershirts. A single black cord tugs from the top of the picture at the subject's neck and cock. The bound victim looks up in distress. The figure is fragile—again, moribund—wrought in opposition to the portrayal of the black male in popular culture.

RESPOND is more than a response. It is at its best a sampling of a new cultural flow, a new imaginary that is able to redirect a hateful regime of images that serves to oppress and invalidate the black body.

Kicking Against the Pricks Peter Williams
3/31/15

Titus Kaphar Pulls Back the Curtains on Racial Injustice Past and Present Titus Kaphar
2/10/15
COMMENTS (1)
Identity Crisis
Why is so much American slang language entering everyday speech? Is something wrong with good English? Think about it while I take 'my ride' to the mall.
Comment by: Peter C. Brandt on Tuesday 01/27/15 at 4:52 PM
ArtSlant has shutdown. The website is currently running in a view-only mode to allow archiving of the content.