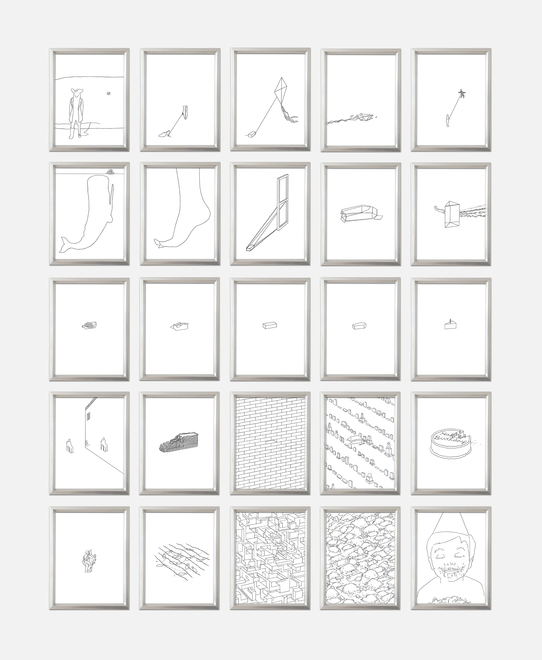 A word forms a concept of its own object in a dialogic way.

—Mikhail Bakhtin, Discourse in the Novel, 1941

Adam Douglas Thompson’s drawings are words. His installed formations are sentences. His words, however, are not defined. His sentences are not linear. They are dialogic imaginations, each image acts a concept which through their relational grouping gains meaning. The groupings can and should be read multidirectionally. This approach is how Thompson believes thought works, a concept trailed by consciousness that couples with nearby conceptual points, with each move gaining contextual meaning. 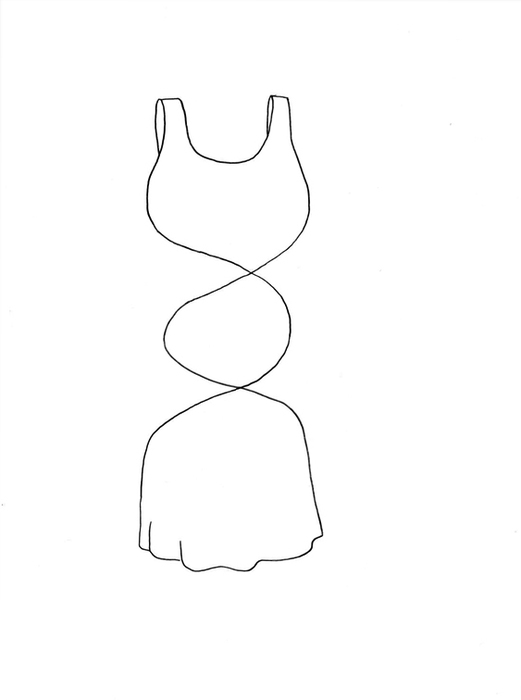 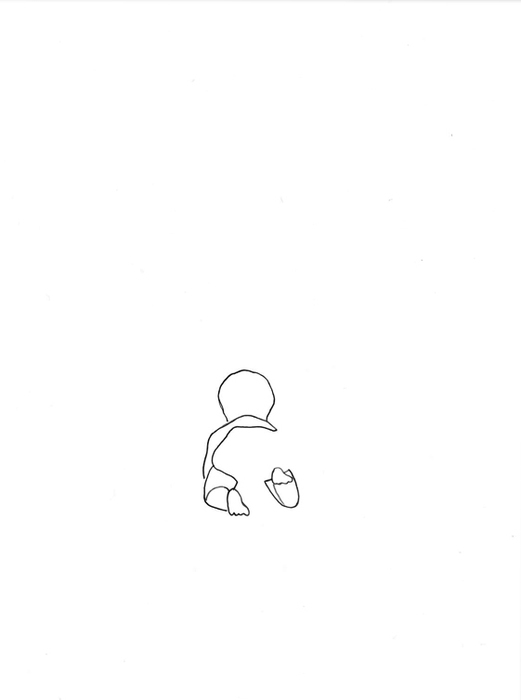 “I believe in particulars,” says Thompson, “in a bottom-up emergence of meaning.” Each image that Thompson draws in a characteristic minimal manner draws on the context a viewer brings to the work, however, it is when these particular objects are grouped that the dialogical wonder becomes apparent.

A cursory glance at his work would suggest that he is playing with juxtapositional readings however a closer look reveals that complex stories about the human condition emerge from very particular visual situations. Juxtaposition relies on contrast. Thompson’s drawings rely on relation to gain their meaning. If you take a series of three of his images you can see how his sentences take shape. Each image is related, image one progressing in form to image two and so on. However, If you view image one and three, the shared form will not be present, their only relationship will be one of juxtaposition. This analogy is imperfect since the serial nature of numbers implies a linear progression. Each drawing is made in relation. 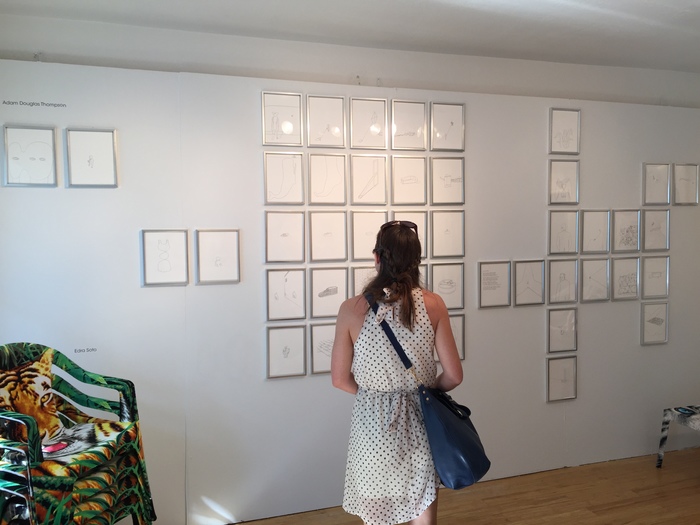 The images do rely on known forms—a whale, a boot, etc.—but these known forms are integrated through stark, black lines. There is certainty in the minimalism of the drawings. The visual economy of the drawings find a visual partner in lingual fonts. They are particular, if peculiar. These form mash-ups are often funny or bizarre like the products of an exquisite corpse game. Sometimes they rely on more stylized interpretations, a sharp, angular Whistler’s Mother, for example, elicits the kind of relationship that would prod Whistler to paint his mother in the way he did. No matter the relational technique employed by the drawing, their stylistic character reinforces their use as component parts of a web of meaning.

The installations that Thompson produces are carefully planned to induce a particular tension. Within the nebulous, associative array, specific and tangible concrete objects call out and produce points of departure through which he addresses major themes in human subjectivity and experience in humorous and deft ways. “A friend once told me in regards to writing, ‘all elements of life must be in appropriate proportions,’ I always think about this as I’m making these webs.” A little bit of humor, some regret—out of these associative formations come an existential poetics, unique to this artist but understandable to any viewer.

(All images: Adam Douglas Thompson, 2014; Courtesy of the artist and ArtSlant)