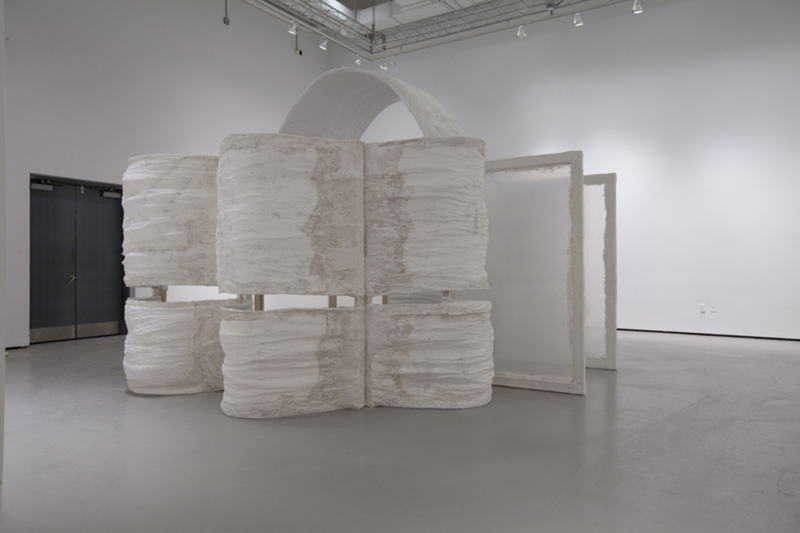 A Play on Material: Oren Pinhassi

Material can be transcendent.

History is a spiral.

These three assumptions underlie Oren Pinhassi’s work. Beginning with the familiar—towels, a backpack, a dwelling—objects are transformed through the addition of another common material, plaster. Through this addition, he transubstantiates the everyday into thematic sculptural and architectural forms, an act that Pinhassi describes as transcendent. There is a key definition being explored through Pinhassi’s work: transformation vs. transcendence. Both connote change, however it is not a change in form that is Pinhassi’s goal, rather an elevation of form into the realm of critique. 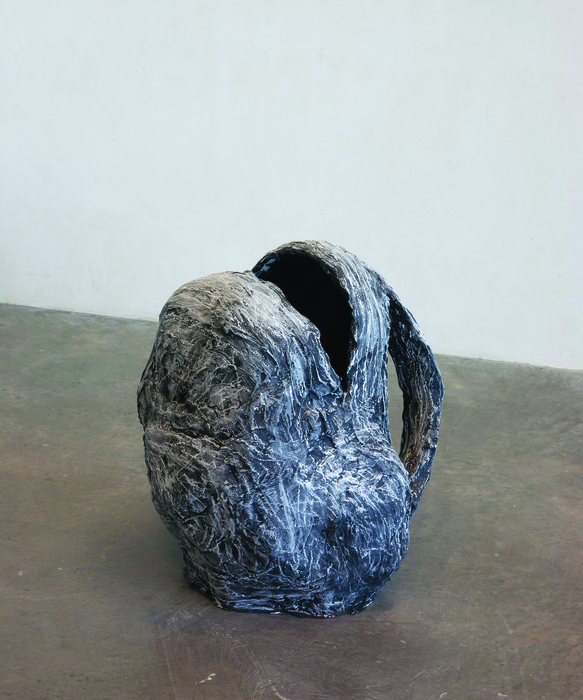 Postmodernism promised a revaluation of culture following the deconstruction of Modernism. Pomo was suppose to be a putting back together. Pinhassi rightly accuses postmodernism, however, of focusing on deconstruction and calling it reconstruction. While these two activities are dialectically bound, the object of postmodern art and indeed postmodern society remains an act of deconstruction. Think of the popular memes of our society and the cultural attitudes they address. As a culture, we are still working to deconstruct the infrastructures of racism, sexism and power that predisposes an individual. Postmodernism ultimately promised a freedom of creation, a freedom of potential that is seemingly impossible without the dissolution of existing paradigms of power and privilege. The problem with this is that dissolution itself is an impossible activity, there is no null state of society that can act as a point of departure in reconstructing society. This is why the act of deconstruction and reconstruction are dialectically bound and subvert a linear understanding of history (hence, the spiral), while something is deconstructed, it transforms, it finds new context within the existing paradigm. Through the simultaneous act of reconstruction the object is always transformed but, Pinhassi asserts, it may transcend as well.

In Pinhassi’s 2014 installation, Untitled, he created a domestic space, a safe space, a shelter. The work isn’t actually a shelter, however, through its material form that calls upon the historical and material histories of its components while at the same time being present in a gallery context and through the material alterations of Pinhassi, it transcends what it is and becomes thematic. Behind this shelter is a brick bathtub, really a brick cube that is built around an emergency water reservoir, a 100 gallon plastic bag that consumers can buy to fill with water in emergencies instead of filling their apparently dirty bathtubs. The plastic bag in the shape of a bathtub calls up the theme of safety, security, necessity, while at the same time disrupting the cassual understanding of the object. 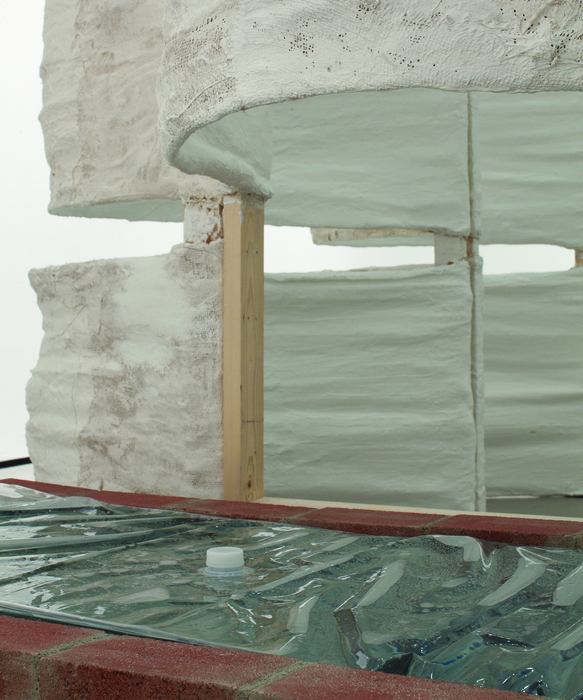 Plaster has a long history of being an art material but it is also used to build and parget walls, to set broken bones and was used in the mummification process. Modroc, the form of plaster used for setting bones is actually noted as one of the first invented composite materials. A very basic compound of alkaline lime and sand, plaster itself is transubstantial.

Sometimes these histories are obvious like the material itself, other times, not so much. The sweeping parabolas that constitute the shelter in Untitled are formed by gravity, an idea Pinhassi gleaned from a technique of the Spanish architect Antoni Gaudí. Pinhassi saw this use as bringing an otherwise hidden force to the fore. Gravity is always implicated in a structure as the structure must defy gravity to stand but one doesn’t necessarily think of this every time you step into a building. By submerging burlap in plaster then draping the sheets from two stable points and letting gravity and time shape the plaster arches, Pinhassi uses gravity as a material, the effect of which becomes apparent when the burlap arches are set sideways to form billowing columns that support a much greater arch canopy over the dwelling. The rigidity of the plaster together with the perceived flaccidity of the burlap situates the forms in a contested state. It is in this state of indeterminacy where the objects transcend their form and become contemplative objets d’art.

(All images: Oren Pinhassi, 2014; Courtesy of the artist and ArtSlant)