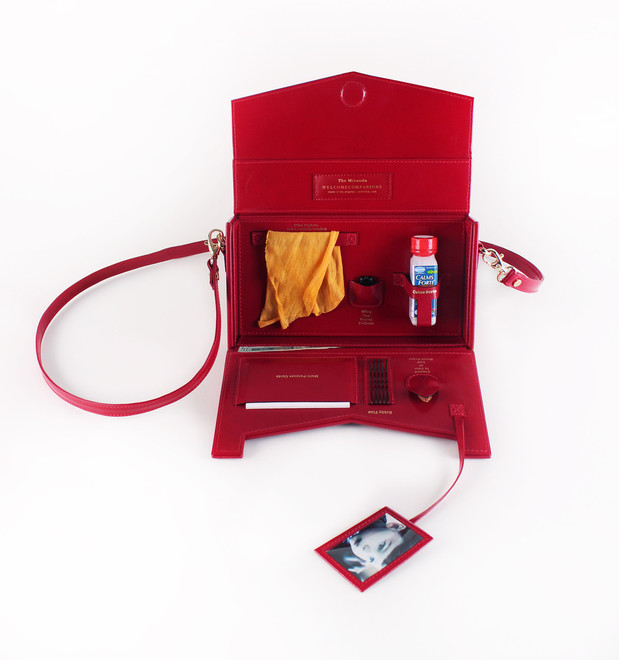 Miranda July's Curious Handbag Is Just For You

This is just for you.

If every outfit you owned were cut to your body, every shoe shaped just for your foot, all the doorways in the house adjusted perfectly for your height.

If in the fridge, your favorites things to eat filled the shelves, rare culinary delights and hearty comfort foods, prepared especial, ready to be placed directly into your mouth to let their deliciousness spread through your being and satisfy all possible hungers. You could never decide which was your favorite ice cream, so there are hundreds of small containers neatly arranged and clearly marked to choose from in the freezer.

Perfectly filled, the medicine chests features all the necessary drugs and ointments, first-aids and pick-me-ups that you may require in the course of a long day, a long night, a long life.

And there in bed (Goldilocks perfection, just the right amount of pillows) is your childhood blanket: battered, stained, fraying at the edge, of indeterminate color and mysterious origin. One precious jewel of a tear plumps out of your eye and rolls to the ground to the lush Persian rug that underlies the California king and you know you’ll be able to sleep the deepest, most perfectly dreamless sleep of your life. Placed near the bed, but facing just slightly away, is a picture of your favorite people all beaming with joy whenever you need to see them and be comforted.

Are you creeped out yet? 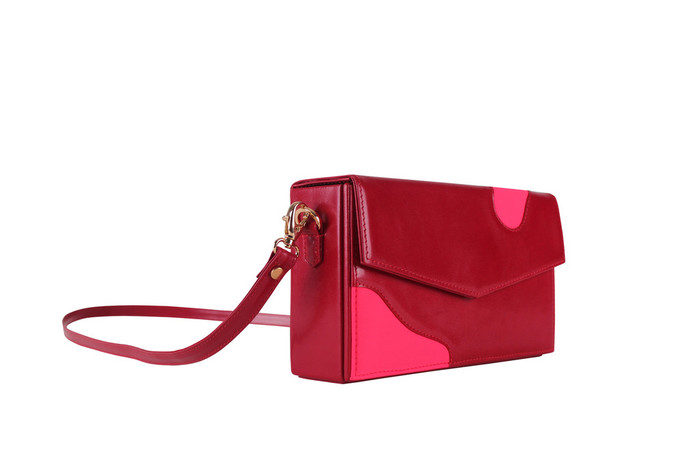 Perfection is a particularly bloodless form of death. Bespoke items are generally the province for the rich, but there is that odd DIY spirit that still percolates in old school post-punks. Whenever confronted with shitty music, a bad community, an unfair society, you make your own. All-ages club and grassroots activism never thought it would birth a haute-couture purse/conceptual art project, but fashion was always an aspect of creating community so why not this bag, editioned to 100?

Performance art became performance albums. A bestselling book was followed by a popular movie. Another movie followed to less acclaim, but no less struggle. The endless crossover for Miranda July continues. I bought a Miranda July record some time in the vague end of the ‘90s. Every voice was hers. I’m still haunted by Megan from Kelso, Washington, calling again and again, with her plaintive voice penetrating the loneliness of a long, dark drive to the end of night.

And now July has designed a bag, her bag: the Miranda. Seemingly fashioned after a doctor’s valise, this little satchel contains what July might carry in her purse, but brought to a hyperspecificity that passes bespoke and lands on the other side of spooky. Made in collaboration with Welcome Companions and recently launched at Opening Ceremony in Los Angeles, it includes a scrap of a security blanket, a faux-photo of July's son (totally legit that she respects the privacy of her real son, but it adds to the creep to have a decoy son), a hidden $20 bill for emergency cab fare, a bottle of homeopathic sleep aid, and one leather-stitched pocket designed to carry a single almond, "in case of low blood sugar." The immediate impulse is to dismiss this as simply the empty fashions that a generation of hard-headed, black-clad artists have mostly rejected, or worse, an artist going corporate, jumping the shark, but there is something more subtle at work.

The ego/marketeering that leads to the naming of bags after people (Hermes’ "the Birkin" named after actress Jane Birkin probably the most famous of these luxe purses) gets quietly prodded by July. Her bag reveals the particular mania inherent to such items. Hyperspecificity generally tends to comes with huge inequalities of wealth, the minutiae of which occupy the extremely bored/wealthy while the peasants sharpen their pitchforks (think France in 1791). The Miranda both quietly mocks the fashion-consciousness of the idle rich, but also sells to them (at $1,725, as an artwork it’s almost reasonable, but as a bag its likeliest consumer is the extremely wealthy). Though it includes a video in a flash-drive tucked into the purse that hasn’t been made available as far as I can tell, the subtlest bit of work comes in the form of writing on a stack of cards tucked into its own special sleeve.

As a writer, July’s sentences embody a self-conscious, socially awkward, and heartfelt earnestness that seemed to define narrative culture during the earliest bit of the 2000s (along with McSweeney’s and Wes Anderson). Reacted against by the following generation of writers as too twee and precious, there are moments here where that gentle, self-aware voice really shines and supercedes its context. The cards in the Miranda were intended by July to help the bearer communicate, but come off as strange poems, more Yoko Ono art instructions or David Shrigley one-sheets than anything too functionally self-helpish; they're more about the difficulty of communication than a direct aid to actually communicating. 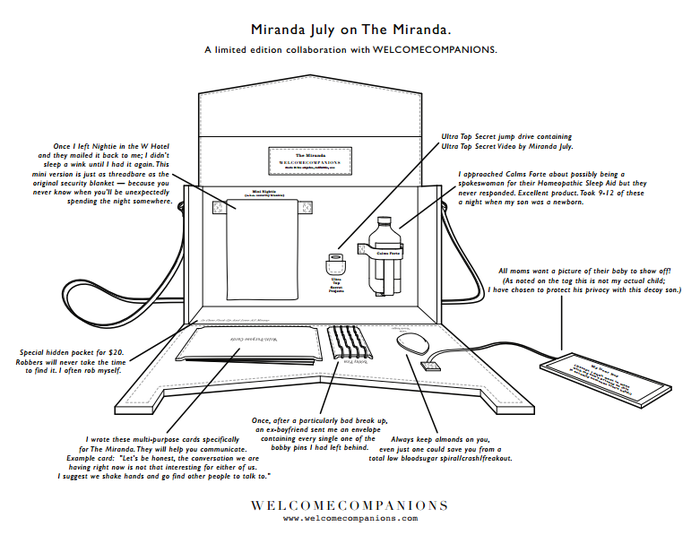 “Let’s be honest, the conversation we are having right now isn’t very interesting to either of us. I suggest we shake hands and go find other people to talk to. PS. If your enjoy our conversation, please disregard the above.”

“I just handed you this card. Now you are reading it. Also, I love you. If you love me too, rip this up throw the pieces on the floor, spit on them, stamp on them, and then walk out of the room like you’re furious. I’ll come running after you and we can kiss.”

“In three seconds, I’m going to burst out into song and I’d like you to join me. We’ll be singing ‘This Little Heart of Mine.’”

“Sadness Punch Card: Each time you feel sad, punch a number below. When the card is full, just keep feeling sad without a card to punch.”

In an overexamined life, the kind where the hyperspecificity of a single almond becomes a desire, these actions will invariably fail to create meaning, that has to be made by us. But the making of art becomes an action—like punching a card for our sadness—that at a minimum gives ritual and action to what would otherwise be sinking depression.

The cards are sold separately at a more modest $22. A decent price to have an excuse to burst out into song or run after your lover and sink into a kiss with them or give yourself some small gesture to combat the sadness.

Pharrell and Ryan McGinley Create New Adidas Ad Promoting Racial Equality
10/29/14
COMMENTS (0)
ArtSlant has shutdown. The website is currently running in a view-only mode to allow archiving of the content.