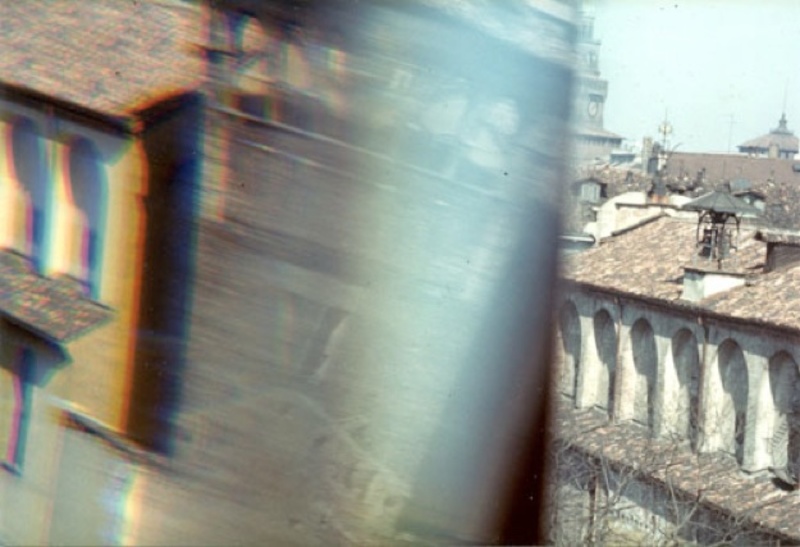 When art explores the fabric of matter. A studio visit with Amalia Del Ponte

Milan, Jul. 2014: It happened by chance. About two months ago I heard about the new donation of a work of art to the permanent collection of the Museum of XX Century Art in Milan: the piece was a sculpture by Italian artist Amalia Del Ponte. Her name was totally new to me. Curious, I peeked into her resume—some solo exhibitions in a few Milan galleries, especially in the 70s and the 80s, and the First Prize for Sculpture at the São Paulo Biennale in 1973. How do you feel?, the work acquired by the Museum of XX Century Art, is the same work Del Ponte presented in São Paulo that won her the prestigious award. It consists of two 1.9 meter-high prisms in white cement and plexiglass, whose mirroring surfaces create unsuspected effects of refraction. When I first saw the sculpture on a black and white picture found on the Internet, I didn’t immediately grasp the humanistic wit of the question contained in the title; it's a query that shifts the focus from the object-sculpture to the subject-observer, which is the actual raison d’être of every work of art. So, how did I feel while looking at this image? Surprised and incredulous, I would say. The work is from 1971; I couldn’t help but notice that the first experimentations with plexiglass by American Minimalists, whose practice presents unquestionable points of convergence with that of Amalia del Ponte, date from the end of the 90s. This intrigued me. I began to look into her work, which consists of separate series of sculptures and groups of photographs and videos, and found myself in front of an incredibly consistent oeuvre—the product of an insightful and bright mind, defined by a certain disposition towards order and precision, with a circumstantial accuracy that never falls into pedantry or doctrine. My next move, of course, would be to meet the artist. This happened a few days ago, in her Milan studio.

The red bricks of Sant’Eustorgio Church, in the heart of Milan, shine in front of Amalia Del Ponte’s studio. It was a beautiful summer afternoon when I came into Amalia’s retreat. The building was once inhabited by the Dominican monks of Sant’Eustorgio—you can still breathe a sort of sacred, mystic air inside. Slabs of stone, hand tools for wood-working, and piles of books seemed to create a studied arrangement. It was not order, but a lively organization of objects that gave the environment a charming vitality. Amalia Del Ponte is a 78-year-old woman. She greeted me with a fresh, luminous smile. 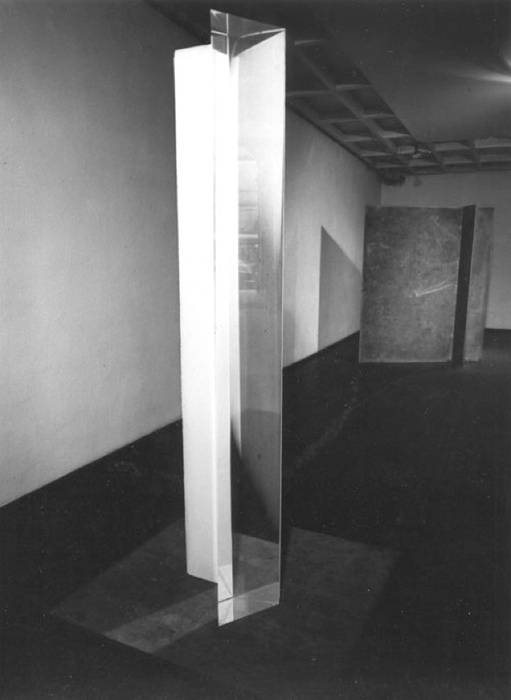 “Something to drink?” she asked me with a typical Milanese brisk manner. She wore comfortable clothes and looked younger than her age; her eyes behind glasses possessed a curious childlike candor.

We started talking about her education at the Brera Art Academy, where she attended the course in sculpture held by Marino Marini. “He was a great master, but I think it was hard for the young generation of artists to continue with his language. He was the last representative of a certain classic, Italic tradition of sculpture,” she told me while rolling a cigarette. At the time, between the end of the 50s and the beginning of the 60s, the Brera Academy was (and still is in part) a forge for new artists in Milan. Del Ponte attended the school together with Gianni Colombo, the father of kinetic art; before them renowned artists like Enrico Baj, Carlo Carrà, and Lucio Fontana studied in the same classes. Those were years of change and experimentation in the Milan art scene. Artists rejected any predetermined formula or obsolete artistic scheme. As a reaction to the visual grammar of the Informal, in Milan Fontana conceived his Concetti Spaziali, monochrome canvases torn by series of cuts, while Piero Manzoni shocked the art world with the irreverent Merda d’Artista [Artist’s Shit] (1961), bringing the freshness of Nouveau Réalisme to town.

It was natural for me to ask Amalia how it was living during such an exciting epoch. What about the mythical Bar Jamaica, hangout for writers, artists and intellectuals, just a stone’s throw from the academy? How about its eccentric patrons, who once even included Ernest Hemingway? “Sometimes I went there, or to the ‘Sorelle Pirovini’, an inn where artists used to meet up. However I’ve always preferred the solitary dimension of my studio,” she bashfully replied. “I needed a space just of my own in order to think—after all my parents have never supported my artistic ambitions. Marino Marini himself maintained that artists need to be discouraged.”

My attention was caught by a series of small transparent sculptures, set on a shelf. They looked like artificial crystals, made of plexiglass; they refracted light in unexpected modes, reconfiguring the surrounding space. The critic Vittorio Fagone called them “tropi” [tropes], a term indicating something with the power to expand the potentiality of matter. These structures—the premises of How do you feel? —are not enclosed in themselves; through a game of reflections they open outwards, reshaping and complicating the environment. Despite their minimalist allure, the “tropes” are conceptually far from the concluded and industrial forms of American Minimalism (but the years are approximately the same: Del Ponte realized her first “tropes” in 1965, while the Primary Structures exhibition at the Jewish Museum in NY was held just one year later). “In 1967 I saw in Los Angeles a show titled American Sculpture of the Sixties. I remember it really interested me. I bought the catalogue. The works by these American artists seemed to deal with issues that were dear to me at the time,” she told me leafing through the pages of the old publication.

The art of Amalia del Ponte aims at exploring the essence of matter. Her research—a look into the cellular weave of organic reality—reveals a certain scientific inclination. In 1974 she “bred” a crystal in a solution rich in potassium alum, studying its slow and regular growth: a process halfway between a laboratory operation and an alchemic ritual (it is not surprising that curator Arturo Schwarz invited Del Ponte to his 1986 Venice Biennale, which focused on the relationship between art and alchemy). “With Accrescimento di un cristallo [Growth of a crystal] I tried to highlight the memory of matter, the mathematical structure of nature.” She turned to me pointing at a tiny vessel containing a crystal in a watery solution. In spite of its alchemic quality, Amalia’s work rejects any sort of mysticism, keeping a rational gaze towards reality. Her creative method is experimental, her technique science-infused. 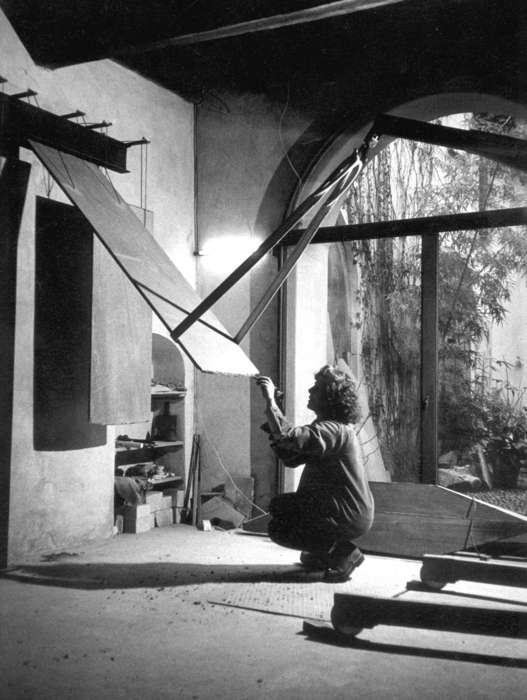 If the crystalline forms of the “tropes” try to unveil the geometrical structure of the world, the “litophones” —maybe the greatest achievement in her practice—are conceived to release the sonorous substance of nature. A group of rectangular stone slabs of different sizes were hung along a wall of the studio; next to them was a basket full of colorful tools of various shapes. “You need them to beat the slabs. You can try!” she said passing me a curious sort of hammer. As the tool hit the center of the stone, a dull, cavernous sound emanated from it. The hanging slabs number seven, like the notes of the major scale. You can play the stones and make your own melody. That’s the function of the “litophones”: disclosing the inherent musical order of the world. “This is Scala Maggiore [Major Scale], which is made of Serpentine. In order to tune the slabs, I had to calibrate their height and thickness. The material was also important.” She got closer to another “litophone,” a large rose-colored slab on which the face of the goddess Potnia was gently carved. “When you make them vibrate, you can hear the waves, the spirit of the stone. But only some players are able to release the real soul of the instrument.” I was literally enraptured by these works. Del Ponte started to make the “litophones” in the 80s—many years before the development of that interactive tendency (so in vogue today in much contemporary art) that sees the viewer involved in participatory and ludic experiences. I can’t help but think of sound works by young living artists like Doug Aitken, Anri Sala, Céleste Boursier-Mougenot; the artist in front of me appears to have reached their premises two or three decades before.

Amalia del Ponte is not only a sculptor. She is also a photographer (“I began to take pictures of my own works because I didn’t have enough money. You know, photographers are very expensive”); a designer (in 1967 Elio Fiorucci called her to design the interior of his store in Milan, and she has also designed purses and jewels, some of them photographed by Ugo Mulas); and a video-maker (she recently produced a series of short videos; one of them, titled Principi [Principles], shows two frogs mating and some tadpoles moving in water). She embodies that kind of artist-experimenter who is not afraid to explore matter in its different forms.

As Amalia elucidated her creations, our encounter turned out to be more prolific than expected. But, before leaving, I couldn’t contain my curiosity about another work, a piece realized in 1977, apparently detached from the rest of her oeuvre. Culturae: florum omnium varietas (Nascita) is a simple installation composed of a Shivas carpet on which an album of photographs and an 18th century print of a flower are laid. The album includes pictures and x-ray prints of her (at the time) newborn daughter Nicole. It’s a work about maternity, about the mystery of birth. “I conceived this installation during the 70s, when feminists didn’t view women’s ‘activity’ of making children very highly. But I thought differently. To me it was exactly the opposite. I found—and still do—the power of giving birth just as a privilege. And I wanted to say this in that work.” 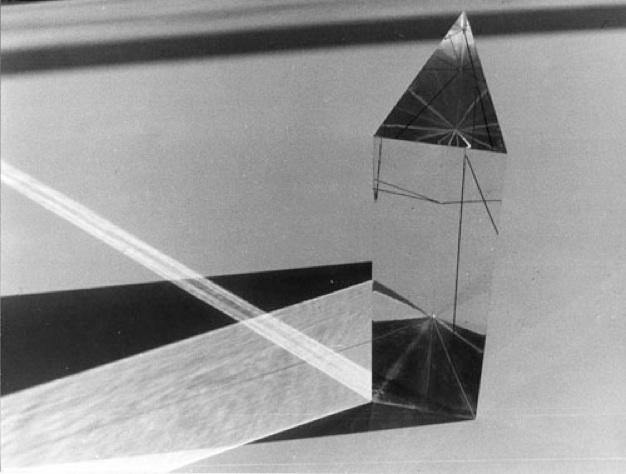 These words made me think a lot. Amalia del Ponte represents the epitome of the free artist—free from visual categorization, from fleeting trends and collectors’ manias, from strict and uncompromising ideologies. She is an artist as much as an artisan and an intellectual; she molds ideas adjusting them to her spirit, just like she does with her sculptures. She was (and still is) a feminist, but in her own way. In an interview published in the 90s in an Italian magazine, she said:

Women, who have traditionally worked for their children […], paying no mind to the “hours,” out of the market rules, should take advantage of this situation. Instead of imitating the male model, they can treasure a practice cultivated over centuries. They can walk the path of obedience to themselves—which is an artist’s virtue. That means working as they are making a significant ritual, without thinking of the economic profit. In other words, finding their own voice and opening the door to something that comes from within, that is hidden.

The sky got darker and the light feebler. It was evening—time to go. We greeted each other. “Next time we’ll talk about you,” she told me with the same fresh, luminous smile. Before leaving, I gave a last look to the studio and the yard. As I crossed the small wooden door, I found again the familiar contour of Sant’Eustorgio. It was wonderful, hit by the light of the sunset.

ArtSlant would like to thank Amalia Del Ponte for her assistance in making this interview possible.