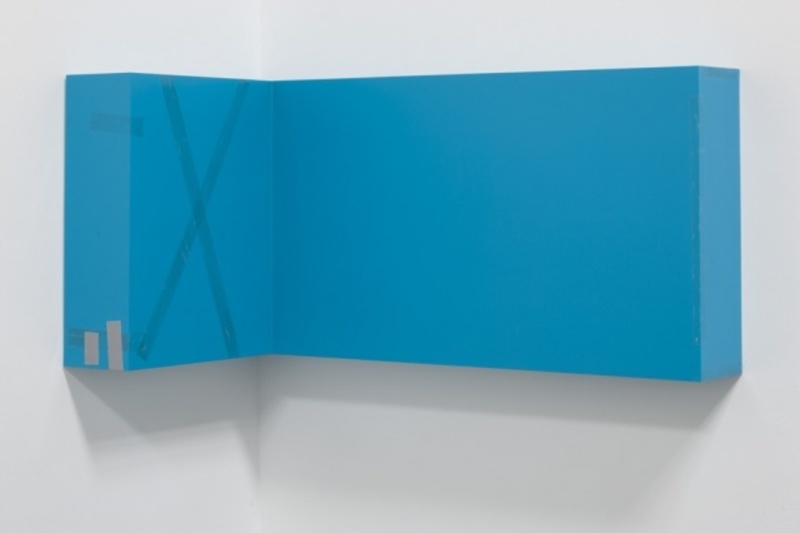 There is a frustrating push-pull in Kaz Oshiro's work: the desire to fiddle with he knobs, look inside the washing machine, or deposit some trash.

At the same time, the gallery or museum setting admonishes us not to touch. As a reward for our good manners, Oshiro has placed his paintings-cum-sculpture far enough away from the gallery wall, allowing us to 'peer behind the curtain' and share his secret. These are no ordinary Marshall amps or Ikea cabinets. Through an accomplished handling of stretcher bars, canvas, and bits of Bondo, Oshiro has transubstantiated his art supplies into the simulacra of consumer goods.

His has been a formula that has worked well, propelling his work from the studios of Cal State Los Angeles to the museums and galleries of several continents. This is no easy feat in a world filled with thousands of art school grads competing to turn art supplies into consumer goods.

Eventually, newly and consistently successful artists face an (enviable) dilemma: when you've hit upon a clever idea, do you keep producing the same body of work--like a one-person sweatshop--until the market is sated, or do you venture away form the safe into uncharted territory?

The show includes work in both the familiar and his new approach, allowing viewers the opportunity to view the work in dialog, seeing which old tricks are brought to the new dog. In some ways I'm reminded of Buster Keaton. Films like Steamboat Bill Jr. and Safety Last--filmed long before the invention of CGI--effects had to be pulled off in real time with precise planning and attention to detail, and for the proper comedic effect, they had to appear seamless. So when the façade of a house falls on Keaton--and he's standing perfectly in line with the second story window--he can appear nonplussed.

In a similar way we're presented with the mundane--in both his materials and the objects re-presented, and then by Oshiro's skill at fooling the eye. This is not Baudrillard's simulacra we're dealing with, but an obfuscation by amazing detail. In similar ways Duane Hanson had set out to represent the working class of his world: his subjects were the museum's janitors, guards and preparators. He sculpted junkies, WalMart shoppers, and fatigued tourists. But his class message was lost once the trick was revealed, at which point the looking at art became all about checking out the pores.

But in Oshiro's newer work, he subverts his own trick: his paintings as sculpture are placed on the wall, making it impossible to see the stapled raw canvas and stretcher bars. The viewer is then left to read his paintings as paintings. One piece appears to be an orange wedge-shaped shelf, as if it were left over from a Haim Steinbach show. Other works are flat rectangles of solid color, distressed with bits of faux dust and fingerprints, or lengths of faux duct and packing tape.

Looking back across the room at the older work, it is now possible to read the faux tape and dust on the Zero Cases in purely formal ways--like constructivist graphics rendered in Home Depot materials. Oshiro's coffee rings and cigarette burns in Formica can be seen as a part of the artist's formal language--like abstract drips without the expressionism.