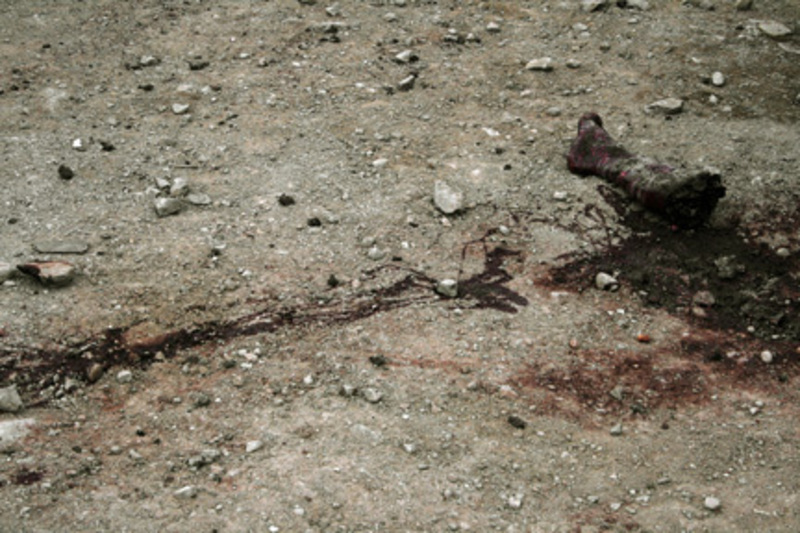 The Artifice of War

Nicholas Grider's exhibition, Artifice and Sacrifice is on display through January 31, 2009.

For those unfamiliar with Grider's project, the left wall of the gallery sets out a bit of context. There's a hand-written anecdote from his experiences at Ft. Irwin along with the re-presentation of (presumably) an army manual that translates the command, "Stop or I'll shoot," into multiple languages.

On several occasions Grider participated in military exercises at the Army's National Training Center (NTC) at Fort Irwin. The Rhode Island-sized base houses Wasl, a "fake" Iraq village, cobbled together from cinder block, shipping containers, and junkyard cars. More fake authenticity is sprinkled over the complex in the form of casualty dummies, amputee actors, and Grider in the role of an embedded journalist.

The surrealness of the work makes them surprisingly not gory. Perhaps their strangeness comes partly from the dearth of real images of the current wars' casualties. The dress rehearsal quality makes them impossible to place along a conventional Baudrillardian continuum from event to representation. Instead, they conjure Marx' dictum that history repeats itself as a farce, turned on its head: our present war seems to be preceded by farce as well.

More images and stories of Grider's NTC embed can be found at his blog News From Fake Iraq.

Lionel Cruet Answers 5 Questions
11/6/18
COMMENTS (1)
Thanks Michael
Thanks for your thoughtful insights & for contributing to ArtSlant. Say hi to Nicholas from the ArtSlant Team!
Comment by: ArtSlant Team on Wednesday 01/07/09 at 5:15 PM
ArtSlant has shutdown. The website is currently running in a view-only mode to allow archiving of the content.