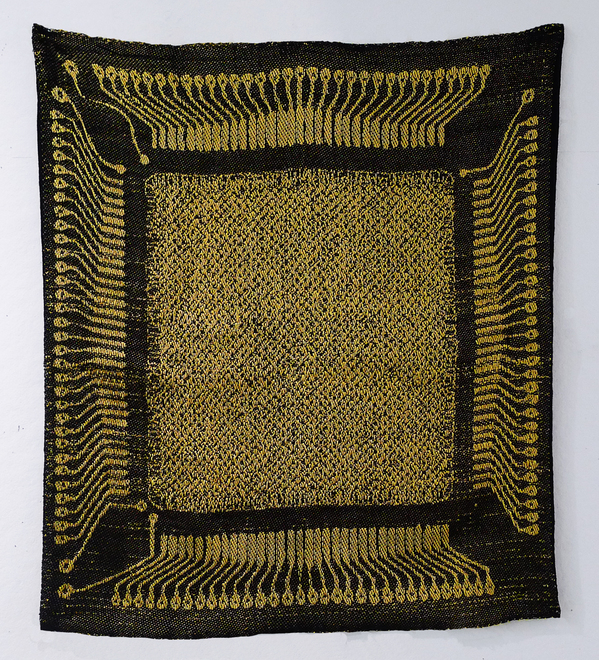 Robin Kang interrogates machinery. From her roots as a photographer (BFA) and through her MFA in printmaking at the School of the Art Institute of Chicago, it’s always been about how the machine affects the artwork produced and what exactly can be done within that process of translation: idea to object. Her latest projects involve two very different explorations. Using digital jacquard looms, she recreates patterns taken both from ancient weaving cultures as well as the silicon culture of microprocessors, all the while interrupting and reinterpreting through the loom. Her concurrent project, BRXL Blocks, is an interrogation of architectural space through the use of very lightweight, transparent bricks made of PET plastic. These piecemeal constructors are farmed out to agencies of production in China.

Kang’s BRXL Block installations leverage our relationship to the architectural. Installed, they take many forms: towers, walls, even extensions to preexisting architectural features. They sway as gallery-goers pass, so fragile and ethereal are they. When she began this project, Kang says she was coming from a place of industrial critique, a critique of the loss of craft. However, as she came to hold and play with these objects, she found they evoked another theme. “This other element of the object itself came up during installation…I placed myself in this child-like place, just playing with blocks again… The fact that people respond to that and have a desire to play with these objects is exciting for me.” One high-profile playmate is the Mayor of Chicago, Rahm Emanuel, who has one of Kang’s blocks in his office and has been known to toss it to visitors, enjoying the surprise on their faces as they exert themselves to catch what appears to be a glass brick. 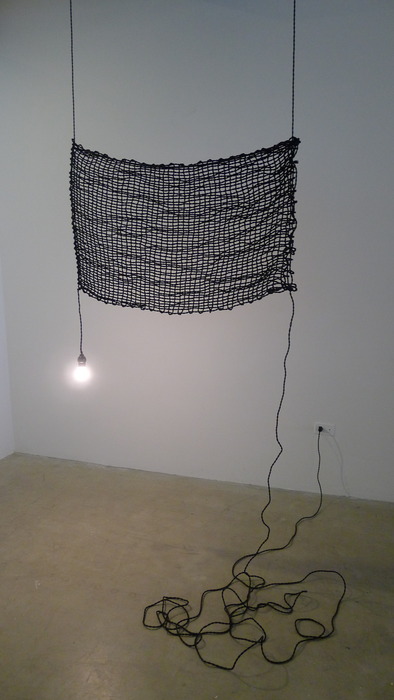 The loomed works bring together one of the oldest computational machines with contemporary technologies. Kang begins, “I was really interested in this relationship between the technologies of digital interfaces and the binary technology of the loom. I started researching images from early computers, specifically woven memory cores that were used in the 60’s and 70’s and are actually made of woven copper wires. There was this interesting physical connection and that was my jumping-off point.” Taking an image, Kang processes it in Photoshop then sends it to the loom where the real interventions and play begin. “There is the moment where you are at the loom and you can switch out colors and put plastic or other materials in or reverse [the loom], whatever you want. It gives you a bit of creative freedom during the process but you don’t really know how it’s going to look until it’s hanging in the studio.”

Within the mechanical process, Kang intervenes, playing the machine like an instrument, disrupting its flow to capture the diversions. Often, a finished piece is constructed out of multiple experiments. “I’ve been sewing together different weavings. For example Ancient Circuit Rising is a combination of weavings including test strips that I’ve added. I have this background in printmaking and I love those printer marks, color tests and print nozzle checks, where the machine is involved in the process overtly.” Here, Kang reasserts her craft, taking together the elements that have been produced by the machine and assembling them to her aesthetic liking. 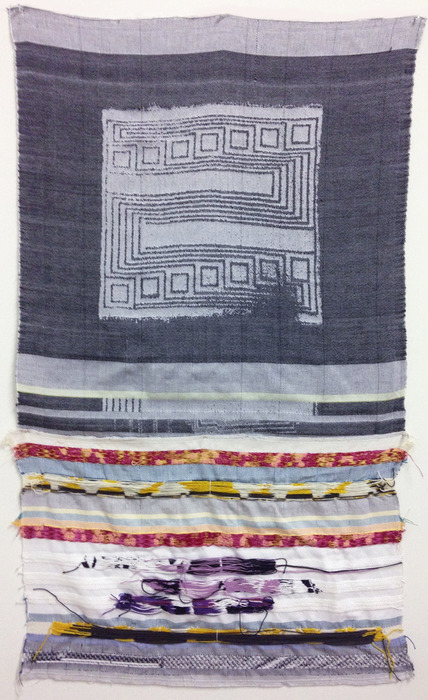 What is striking in her loomed pieces is that the patterns find a moment outside of time. Looking at the collection of Kang’s works, it is sometimes difficult to know whether a pattern is one that has been produced through muscle memory, passed down over generations or by core memory, writ in 1’s and 0’s and translated into the rapid movements of steel armatures. The delineation between ancient and modern technologies is blurred in Kang’s tapestries. “Some of the imagery I am using comes from cultures that were master weavers like the Nazca and Kazakh tribes who used highly geometric shapes. Ancient Circuit Rising is actually from a Nazca pattern. What is surprising is how similar some of those images are to what we think of as circuit boards.”

Of course, within any practice that relies on machinery, there are errors in translation. Kang, however, doesn’t view these as errors at all. “Some of these [ancient] patterns are faded or missing pieces so as a source material it has already changed. Then, when I put it on the loom, the aspect ratio changes. For instance, some of the images become elongated when transferred to the loom. These errors actually are a collaboration with the machine, something I wouldn’t have arrived at alone. It’s about the relationship between the hand and the machine and opening yourself up to create something other than an exact replica and to let there be a dialogue in the process. That’s when I have the most fun.”