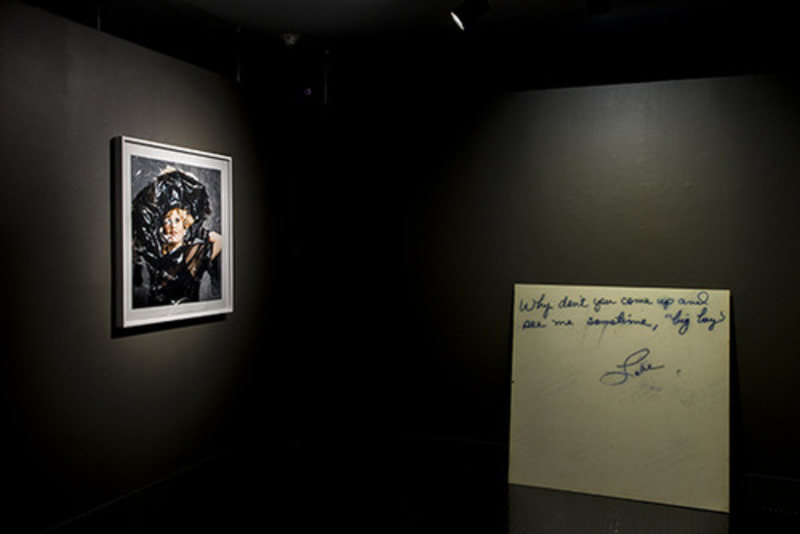 When I downloaded Snapchat onto my phone, I anticipated texted pics of my friend’s private parts. Fresh and naïve, or aloof and repressed, I assumed Snapchat, that’s by extension #selfie culture, had only one thing in mind. Snapchat is an app for text and picture messaging, mostly for cell phones. Everything sent through Snapchat disappears within seconds after being received and opened. If it’s not explicit, why else would you want your pictures to vanish seconds after the recipient views them? Snapchat’s icon is a ghost.

Now, I recognize that Snapchat could be too deep a reference, for some. How about #selfies? You know, the self-portrait taken with, presumably, an iPhone or Android device. I mentioned that I once assumed #selfie culture was all about sex. I do still think #selfies are about sex, but it’s messier than “just sex.” Using applications like Instagram or Snapchat, where there are lots of #selfie uploads, it becomes clear that the urge to take one’s own portrait, in an age of astonishing instant gratification, has more to do with gesturing at the “present” and the appearance of the self in that present, not necessarily as a sexed up subject. Rather, today’s #selfie subject (you, me, everyone) is a stand in for every other #selfie. At home, on the street, at the mall, in the car, at school, and at funerals—hashtag—everyone has a thumbprint. Perhaps in a culture where nothing seems to exist if it's not online, it’s existential to take a #selfie: I am online, therefore I am. Art can, like Selfies, give us the opportunity to formalize how very complicated being alone can be.

What does it mean to be seen? Garry Winogrand in Women Are Beautiful and Zoe Crosher in The Further Disbanding of Michelle duBois both look this over in a duo of exhibitions recently on view at the California Museum of Photography in Riverside. A distinctly existential force in 20th Century photography, Winogrand was the subject of a large-scale retrospective organized by the National Gallery of Art in Washington DC and SFMoMA. Shown before at LACMA, MoMA, and now at the Academy of Fine Arts in Vienna, Austria, Crosher’s Michelle duBois reveals a little more of her own arcing shapshot legend at each passing. 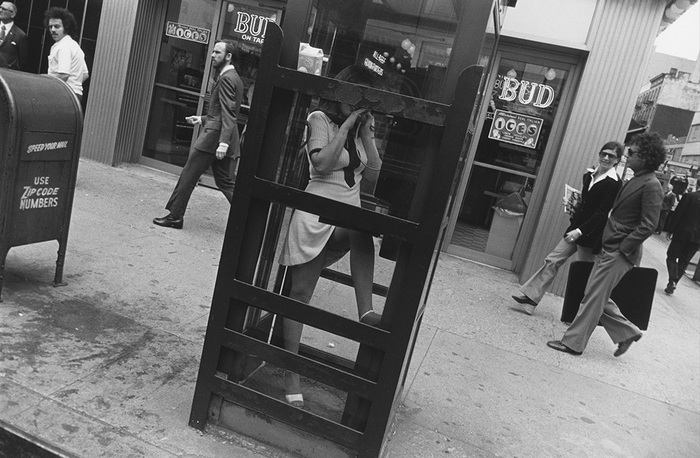 Women Are Beautiful is the pithy title of Winogrand’s series, originally published as a book in 1975. Page after page or print after print, “single” ladies and groups of women are featured, in more or less the center of Winogrand’s frame. The sense of place is consistently outside, on the street, urban—Manhattan, to be specific—with few exceptions. A woman in a bikini top and jeans on the sidewalk in Aspen is one such exception, the tilted frame less so. Is it coincidence or acute syntactical jest that "tilt" is the manner of so many Winogrand frames? A word that rhymes exactly with "jilt" would be hard pressed to describe, with more accuracy, the sense that Winogrand makes his photographic approach with his heart on his sleeve, always sure he’ll be jilted by the fine or dowdy ladies he shutters.

Gesture is the heart of Women Are Beautiful. Like our lady in Aspen, so many of “Winogrand’s Women” are walking alone or in packs, bold, braless, bare-legged, stately, modest, and confident, on wide sidewalks flanked by impressive architecture—this bustling postwar empire. Winogrand seems amazed.

Women Are Beautiful is full of brief and shockingly subtle exchanges. Compositions are made between met gazes, limbs frozen in action, and wardrobe accessories that reach at the edges of the tilted frame. Form describes itself. We begin to see the whole photograph, in terms of Western pictorial conventions, less a chauvinist pronouncement of free tits or the prospect of ass. We are left wondering two things with differing degrees of urgency: What does Winogrand mean by “Beautiful"? and, Why so few women of color? At best, these photographs are optimistic and knowingly charged with some flagrant subjectivity; they’re always inquisitive, for a notoriously brooding, probably nihilistic, and frenetic photographer.

In The Further Disbanding of Michelle duBois, Crosher furthers the reorganization and dissolution of the inherited personal photo archive of the pseudonymous “Michelle duBois” an all-American call-girl in the Pacific Rim who constantly self-mythologized through photographs. Crosher experiments with the formal conventions of display, namely in the re-presentation of this archive, and an awareness of the materiality of the analogue photographs. The keeping of this archive is, in Crosher’s hands, an act of concerted devotion complicated by the volumes of articulated personas that duBois, herself, features. This project is not concerned with keeping track of who duBois “is” in the pictures. 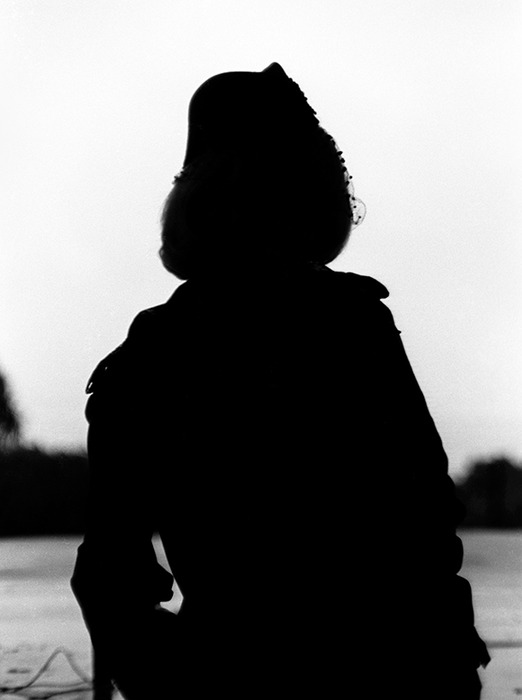 Over many years working with the archive, Crosher has developed a sensibility for corporeal indexicality. What do I mean? The scale and fluent amateur vernacular of duBois’ archive, that takes place throughout hundreds of analogue snapshots, is the perfect synthesis for Crosher’s project. A project that prioritizes, especially in The Further Disbanding of Michelle duBois, “photographic stuffness.” Since I only know Michelle through Zoe, this stuffness is a body, a being, a legend invented and existent in this trove of snapshots.

In Riverside, the work is hung against painted black walls and seems to soften the edges of black-framed prints. Looking closely it is clear that what I thought were moody abstract forms actually is photo emulsion devouring the image that is barely visible under this layer. There are in these prints what I know to be duBois’ legs. I’m seeing her stylish undergarments as well as the full date printed in dot matrix orange up the side of the print, telling me exactly that Crosher has enlarged a snapshot. Barring any sight of Michelle’s face in these images, I am aware that the rest of the show plays with formally obscuring duBois’ face. Crumpling, fading, voiding. If a person can only exist through a picture, what does it mean to destroy it? Crosher makes clear that photographs will no further record than construct an identity. So what is a self-portrait, let alone a photograph? Michelle and Zoe want to know.

The power of the Michelle duBois Project is rooted in an undeniable agency, albeit subverted. Who knows whether or not duBois got what she wanted, whether or not she got what she was looking for, that compelled hundreds of snapshot self-portraits. We have now, by Crosher’s hand, the self-conscious translations of duBois’ facts: her faces. I think of dark matter and how this evasive force of nature holds the Universe together, or something like that. It becomes clear that Michelle is a universe, or that she created one out of Kodak. Crosher is an astronomer, mapping and charting this slipping, turbulent, and alluring archive-universe perched just so, in the face of digital photography and up against Winogrand.

The power of witnessing can be synonymous with a splitting of observation, when the witnessed observes the witness. In A Book of Common Prayer, Joan Didion’s main character, Grace, besieged by loss and violence, delivers the novel’s last line, “I have not been the witness I wanted to be.” In this last gasp, the narrator delivers the novel’s surrender, unto itself. What does it look like when photographs regard themselves in this way?

Crosher and Winogrand offer two different points of view about the role and subjectivity of “the photographer,” the fate of analogue photography, and about how we understand the objectness of the photograph. For Winogrand, to wander like some old-fashioned flaneur, shooting and exposing his subjectivity, is surely a kind of tongue and cheek illicitness.

His reportage hedges on a kind of anonymity that proliferates, into fervor. To be seen on the street is to exist; there’s power in being witnessed. Michelle duBois, in Crosher’s arrangements and interventions, reveals the perils and thrills of a person made only through pictures, the illusory nature of existence, predicated on a photograph. How easy it is to crumple, doctor, shred a shiny slip of paper, or perhaps this ephemeral cluster of pixels.

Selfies, like expressions and our selves, are ephemeral things. To be alone, to be seen, to exist out there, on the street, on the web, if only through the fragile colors of a picture, is something worth looking at.