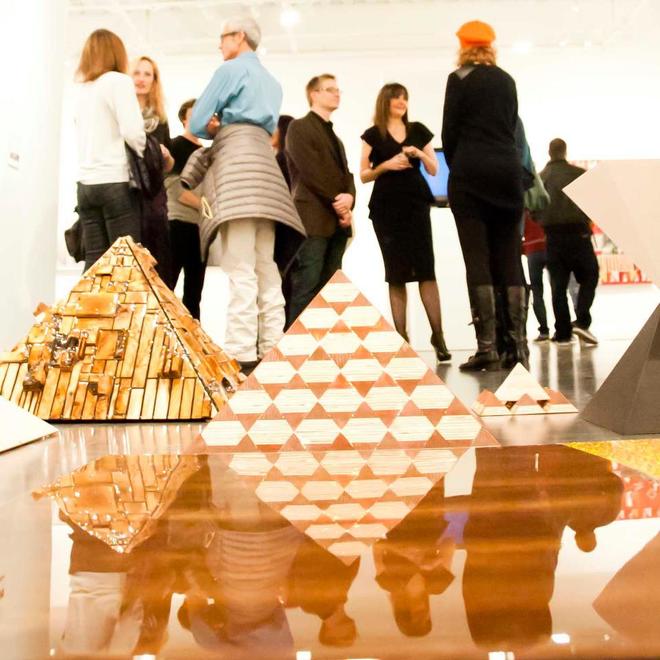 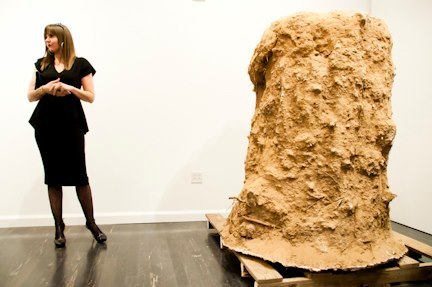 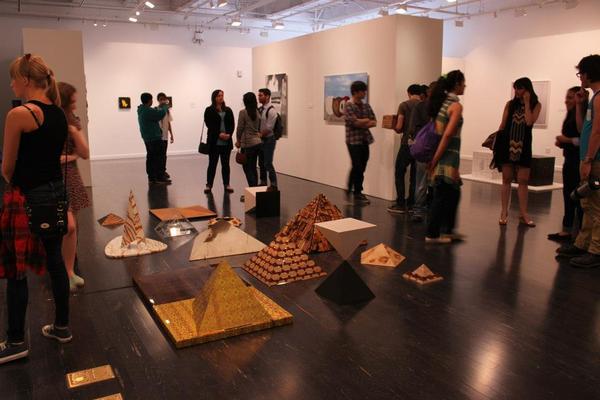 The list of questions below were given to Mary Anna Pomonis by me regarding her curatorial exhibition at Vincent Price Art Museum.

1. I read that the idea for this exhibition has been in your mind's eye for about ten years.  How did the show remain true to your original vision and how did it change?

In 2009 I was hanging out with Allison Stewart and Carole Caroompas.  Allison, Carole and I had just come back from a show I curated in New York at Space B Gallery in Chelsea entitled, The Gun Show. We began joking that after making a show about the taboo topic of gun culture it would be cool to do a show about God. The idea really stuck in my head because I am from the Midwest and a very conservative Greek Orthodox family.  On the one hand I rejected those ideas when I decided to become an artist and move away from home.  However, like anything else you reject it becomes deeply imbedded in your memory and somehow elements ofthat rejection become part of your practice.

2. How do your personal politics work with the artists you chose for the show?

I tried very hard to balance the selection of sculptors, photographers, painters, and environmental practicioners.  I also was very conscious of selecting a balance of men and women as well as people of color and people who identify as straight or gay.  I found that because so much of sacred ritual is based on diversified ethnicity and social experience, balancing artists led to a richer array of objects.  For example Todd Gray's Shaman photographs are shot in Africa where he has a studio.  Todd's work is performative, he stands with shaving cream completely covering his body in the middle of jungle.  His photographs simultaneously convey the frightening hood of a Klansman and an African shaman in the midst of a trance.  Those kinds of associations are specific to him because of his racial identity and his work resonantes with meaning as a result.

I took myself out of the show although my work is deeply connected to the exhibition statement since I am fascinated personally by the connection between modernist notions of aura and contemporary artistic practice.  I felt that taking myself out of the show would make the audience experience more about the topic and less about the ego of the curator.  I know that it's a protocol that is not always held up however, it just seemed like the right thing to do.

When I am selecting an artist for a show I have to feel a strong sense that in addition to the conceptual linkage with the project, the artist will be a pleasure to work with.  I include Allison Stewart in my shows a lot because her work has incredible depth of meaning and I know form experience that Allison brings a level of professionalism and generosity to the projects she is involved with.  Allison wrote the most incredible artist statement for the show outlining her project, American Anthem connecting her images of young soldiers to the Mannerist images of Christ and Madonna.  Stewart points out that images of the tragic hero have become our sacred secular icons, that idea really resonated with me and i had to include her work.  There are so many great artists in the show, I could go on and on, I'll just quote the didactic:

Wilson, Ross Rudel, and Linda Stark.  There is a theology of presence

evident in their work; the artist's hand must be present in the making in

order to create an energetic action that is felt by the viewer.  Each of these

Wilson employs painterly marks atop prayer rugs that can be used as objects, paintings or

images. Stark's inventive surfaces are often embedded with bugs and spices that are layered

directly into the paint, evoking magic via sacramental offering...

3. In your statement you wrote that the exhibition was divided by two: those who use ritual in their art and those who use the idea of spiritualism in a cynical way.  Would you consider ritual being a part of every artist's process?  Speaking for myself , and my creative process, I see having the qualities of spiritual rituals.

Most of the artists I know have incorporated aspects of ritual in their studios.  Artists place salt in the corners of their studios, burn sage, hang up images of Kali, the Virgin of Guadalupe and other collections.  Although most contemporary artist tend to mock the ideas of faith, they often have deeply repetitive practices in the studio that mimic sacred meditation.

4. How did the agnostics occupy this space?

The response I got most often was a sort of active confusion followed by excitement.  Many people at the performance day (co-curated by Adriana Yugovich) were really energized by the performances for different reasons.  My boyfriend Justin Stadel felt the performances enhanced his relationship to the work.  Which really surprised me because his sensibility is more abject.  It's one thing to say, The Semi-Tropic Spiritualists are going to perform and quite another to watch them build a pyramid and then go inside the gallery and stand in front of one of Paul Guillemette's beautifully crafted pyramids made of recycled wood.  The chanting Buddhists led by Jennifer Juniper -Stratford spread out around Paul Guillemette, Adrian De La Pena, Ron Laboray and Allison Stewart's work.  Their meditative chanting for me personally changed the experience of looking at Laboray's, "Flaming Monk" and Carole Caroompas' Dancing with Misfits: Eye Dazzler: Les Desaxes. Both Carole and Ron deal with popular culture imagery and its easy to think of the images as sarcastic however, there is a layer of Buddhist suffering that comes with the images of horror, so evident in both of their works.  Krystal Krunch held a workshop to help visitors intuitively read the artwork in the show, so there were a lot of people wandering around and looking at art trying to commune with the objects while performers were performing.  Ross Rudel created a beautiful piece entitled Wet Column,  where he stood on a tree stump in a felt suit with a wooden cage revolving around his head while he stood transfixed.  Rudel fluffed out his hair in order to prevent the cage from striking him, there was this element of his being like a caryatid and the museum operating as a tie that bound him to the temple column.  Finally there was this really interesting dynamic between the calm Movement Ritual piece by Diana Cummins based on Yoga movements and the pure camp of Barfth the self-described sludge-metal band.

5. The "white cube"-occupying the gallery space reminded me of the Suprematists and their search for the purity of only "feelings".  Is the conceptual aspect of your curatorial efforts a search for this kind of non-objectivity?

It's interesting you should say that.  I definitely think that the gallery and museum today are the closest things our culture has to a pure or sacred space.  Perhaps its my own efforts that create meaning in the face of total banality that facilitated my drive to search out a museum venue for the show; to turn what initially started as a joke, into something that could lead to something more.

Posted by Sandra Vista on 5/14/13
RELATED ARTICLES
COMMENTS (0)
ArtSlant has shutdown. The website is currently running in a view-only mode to allow archiving of the content.