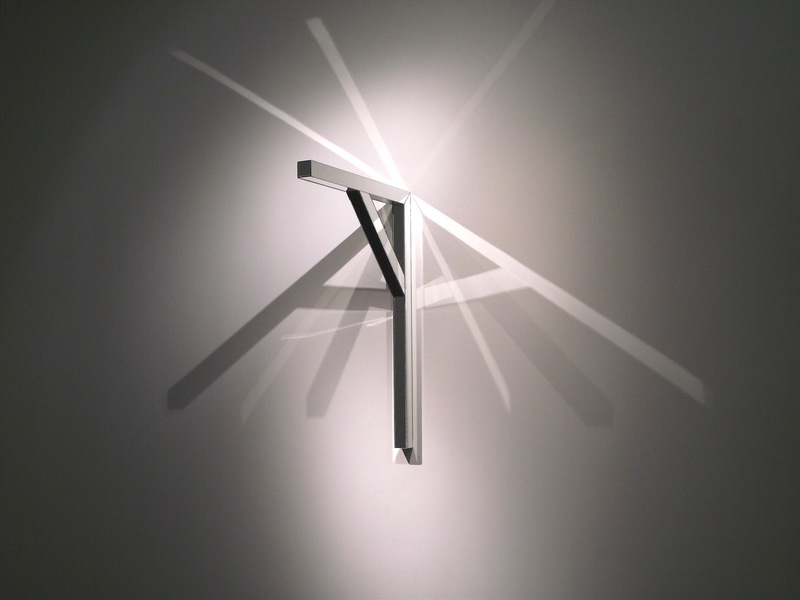 The desert, the edge of the city

Those who say that Los Angeles has no history would do well to drive east. There, the signs of the past ten or twenty years, at least, are unmistakable. Ever newer developments, stamped with KB Homes' trademark homogeneity, impose a geometry on the landscape that feels immediately familiar, as though one had gone back in time to pass the same part twice. In a sense, one hears, these areas are having something of a second life. Investors of the sort who've been doing well lately are accelerating the conversion, heretofore a dream of certain free-market ideologues, of foreclosed homes to cut-rate rentals for those displaced from the urban centers.

It would be interesting to try to map these areas on Karen Lofgren's series of four Self-Actualizers, all 2013, on display at the artist's first gallery show at Royale Projects in Palm Desert. They're there, somewhere between “Sources of wealth: Earth + sun” and “Wealth extraction” on Philosophy, between “Profit” and “Issues” on Climate, and in Species' and Vision's “Shelter,” of course. Each term takes its place in these works' relentless adaptation, translation, and corruption of Maslow's hierarchy of needs, an influential but outmoded theory of the evolution of human motivations from necessities to self-actualization.

The interest in what you could call craft aesthetics—the body of each piece is made up of panels of leather (and, in Climate, snake skin) stitched together, words branded on—is thus matched by a critical engagement with a pop psychological model in which the viewer inevitably becomes entangled. This recalls the work of Mike Kelley, certainly, but also other Los Angeles artists who emerged in the past twentyish years, including Jim Shaw and Marnie Weber, whose work investigated the relationships between art practices and belief structures. 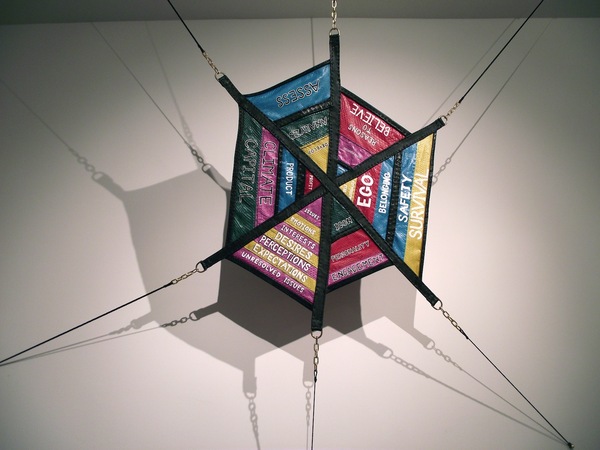 What's especially interesting in “Blood Sister” is the way in which this trajectory is set in dialogue with another West Coast movement, Light and Space. Like Robert Irwin's famous discs, Lofgren's Hanging Brackets, 2013, cast a complex but orderly array of reflections and shadows on the space around them. Yet where Irwin's work aims to dissolve into an experience of pure perception, effacing the object in favor of a heightened awareness of the environment, Lofgren seems to draw on the inherent chanciness of this approach, which results in many visitors to Irwin's installations seeing nothing at all. With the brackets, the object re-emerges as mediator of a series of possibilities, depending on the conditions of its installation, taking on the aspect of a fetish, an impression strengthened by the proximity of the leather-and-chain Self-Actualizers.

The element of the occult inflecting the aesthetic asceticism of Light and Space is perhaps most prominent in the two sculptures that share the name The Gathering, 2013. A bronze goat head, subtitled Goat Song, and a cast aluminum chicken, subtitled the sacrifice is never plucked, are placed at North and South to the Hanging Brackets' East and West, surrounding a rough diamond of light in the center of the space, reflected from the mirrored beams.

The scene raises the specter of sacrifice, but in fact nothing of the sort seems to have taken place. On the contrary, one kind of process, the slaughter and sale of animals, has been arrested and subjected to another, one that presupposes a concept of authorship and an at least partial investment in futurity. The song hidden behind the goat's tongue could be the key that unlocks the complex dialogue between these pieces, encompassing form, materials, and facture (Hanging Bracket #1: Corrupted has been made by Lofgren herself; Hanging Bracket #4: Perfected has been fabricated), as well as those that circulate within the show as a whole. In its absence, I understand “Blood Sister” to refer to the way Lofgren mixes the blood of two distinct LA art movements, exposing a wealth of evocative possibilities on the borderlines between language and sculpture.