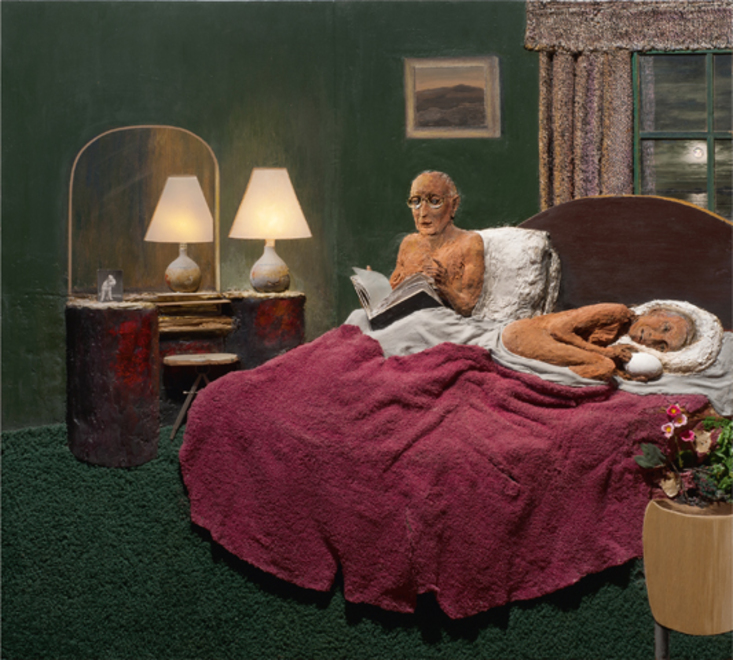 Here’s a show whose reception seems to have been preempted by the mounds of publicity preceding it. The narrative, though likely familiar from one or another of the articles touting Llyn Foulkes’ resurgence, bears repeating here, this time in line with the chronology established by the retrospective itself.

A Los Angeles artist since forever ago, Foulkes began by working through influences both global (Rauschenberg, Dalí, de Kooning) and local (notably Richards Ruben, whose imprint is unmistakable in early abstract works like 1959's Untitled). His rise to recognition came through paintings exploring the iconography of the American West, in postcard-parody landscapes like Death Valley, USA and portraits of livestock like Cow, both 1963. Applying paint with a rag, Foulkes created textures that rarely fail to captivate, and this unique and impressive technique contributed to the first prize in painting awarded him at the 1967 Paris Biennial.

Yet, as the artist recounts in an interview in this January’s Modern Painters, this moment marked the beginning of a crisis period, leading Foulkes away from the subjects and style that had brought him fame to pursue a decidedly untrendy mixture of Pop Art and Expressionism. This trajectory defines his painting from the early seventies to today and his retrospective.

Writ large across the show is the particular difficulty of writing about this second period. It’s possible that curator Ali Subotnick intentionally mocks the bad faith of one’s furtive glance from art to wall text through captions describing the adjacent whatever in terms so literal as to be redundant. If so, she ably enhances the frustration effected by Foulkes’ heavy-handed paintings. Even many among those prepared to bewail how this country’s gone to shit will struggle to relate to the simple-mindedness of using Mickey Mouse and McDonald’s as symbols of commercialism, as Foulkes does innumerable times in this latter corpus.

On the other hand, the form of these works may ironize the embarrassing ressentiment expressed by their content. Working with mixed media, the key to these paintings is their extension into the third dimension. Self-portraits, stages, rocks and real sweaters jut inches past low-relief, supplanting their canvasses’ lack of allegorical depth with literal depth. Needless to say, this technique, which prioritizes presence, runs directly counter to the endlessly reproducible, essentially dimensionless images, like Mickey Mouse, through which mass media saturates our lives. 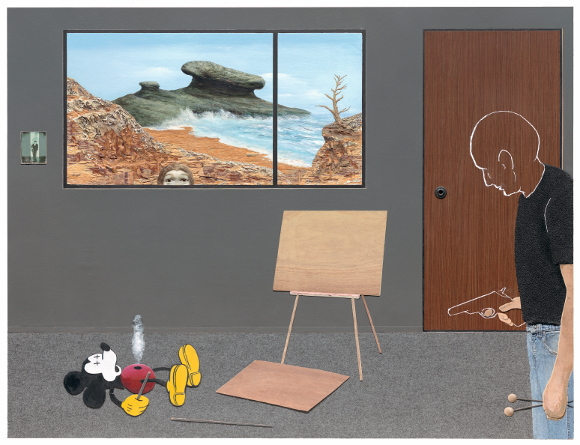 Because of this, however, it seems as though Foulkes positions his work not so much against as alongside Hollywood's, embracing a certain isolation from the circulation of culture that art, in its less commercialized forms, appears to have to endure anyway. This suggests that his paintings be viewed neither as offering solutions (the obviously facile gesture of Foulkes shooting Mickey Mouse dead, in 2007's Deliverance, is belied by the fact that Foulkes appears in this work as merely a white outline) or even critiques, but rather act as metonyms of the problem itself, channeling the very diabolical energies that demand differentiation at the price of our humanity.

This structure is most clearly expressed in The Awakening, 1994-2012, a painting that evidently took as long to complete as did Foulkes' divorce. The theme of impotence is perhaps most profoundly expressed by the mirrored lamp; if Foulkes' goal in executing these dimensional works is to make it appear as though light emanates from them, as he stated in his Modern Painters interview, the fact that both the lamp and its reflection are plainly lit from inside the painting by separate bulbs reads as a biting mockery of this ambition.

Whether this kind of Woody Allen-esque pathos is one's particular taste is neither here nor there. What interests me in this retrospective is the skepticism it expresses towards the notion of activist art. For Foulkes, changing the world seems a foregone possibility, and painting is only a means to tunnel deeper into the marrow of the difficulty. After years of picking, these works feel less completed than simply sloughed off like an old scab.