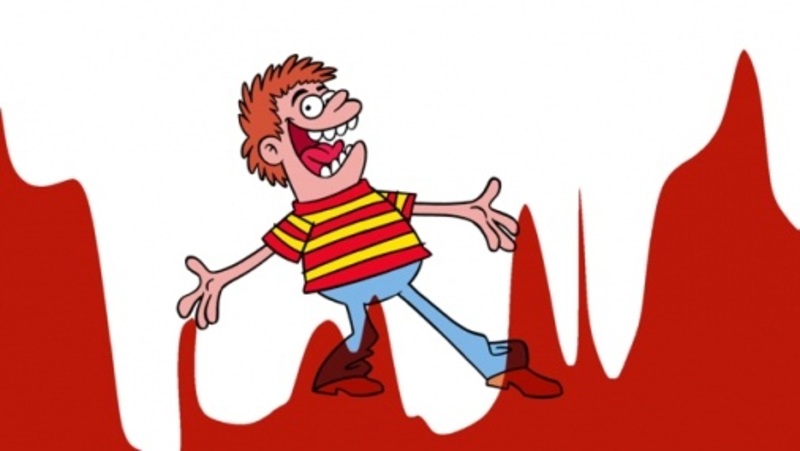 I could watch Jordan Wolfson’s Raspberry Poser for hours and hours, which is to say far longer than downtown parking affords. Having the large-scale projection all to yourself in the middle of the day, splayed out or dancing on wall-to-wall white carpeting is a pretty sweet, cozy thing.

The third in the artist’s new (and suddenly signature) series of hybrid CGI, hand-drawn animation, and live footage videos (following Con Leche, 2009, and Animation, Masks, 2012), Raspberry Poser is the first to be composed around pop music—and so unabashedly, ecstatically so that it fully expands Wolfson’s burgeoning mini-genre into the sirens’ realm of music video. Hooked by jams: from Mazzy Star’s dreamy Fade Into You to Roy Orbison’s classic Only the Lonely and two versions of Beyonce’s Sweet Dreams (Beautiful Nightmare), the music chugs the video along, quadrupling its narrative absorption and the evocative power of its layered, collaged imagery.

On top of that, various animated figures weave in and out. The most transfixing is an undulating, gyrating condom, its transparent membrane floating and flapping in the middle of the screen as its insides bubble over with an endless proliferation of red, heart-shaped blood cells. The erupting popcorn-popping rhythm of rapidly multiplying cells, platelets, bacterium, pills, lozenges, cinnamon candies, lifesavers, pucks, bubbles, or whatever else they may be is what I feel the whole video is somehow, at bottom, about. Thinking about sputtering jizz and leaky utters. But also thinking about Raspberry Reich and Raspberry Beret, sex, pipes, sinks, weightlessness, hypnosis, retinal and art world buzz, hype, debuts, commissions, series, and Bruegel’s paintings of winter hunters and the Tower of Babel because they just flashed by in the background. 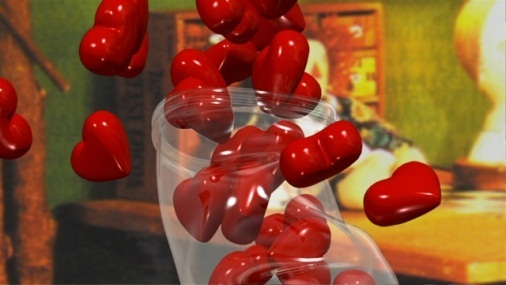 The second most transfixing character: a bunch of raspberry red bouncing polygons, nearly spherical and rubberized in texture, that are spiked allover with wobbly knobs like a squishy, squeaky dog toy or some exotic microscopic parasite—their form is in fact based on the barbed IED-structure of HIV. Thinking about video and visual viruses, infectious optical stimuli. But also thinking about AIDS, resistance, strain, lower Manhattan, money, fashion, gay marriage, 1980 (when the artist was born), 2012, death, demographics, and the two questions asked (in the artist’s voice) by a cartoon teenage boy in jeans and striped T-shirt who smiles incessantly and back-bends like Gumby: Do you think I’m rich? Yes. Do you think I’m a homosexual? No.

The most disturbing, distancing, and abrasively addictive character, the final typology, is that same cartoon teenage boy in jeans and striped T-shirt who smiles too much and too creepily, displays a terribly violent psychotic streak, repeatedly sheds lots of blood, cuts himself open like a fish, blows smoke rings ‘yes’ and ‘no’, and disappears in acts of magic. With every cut, the cartoon-as-irresistible-menace seems to return infinitely and resiliently—sometimes not even as cartoon at all but as painting and drawing or doppelganged in the form of Wolfson’s real live punk boy.