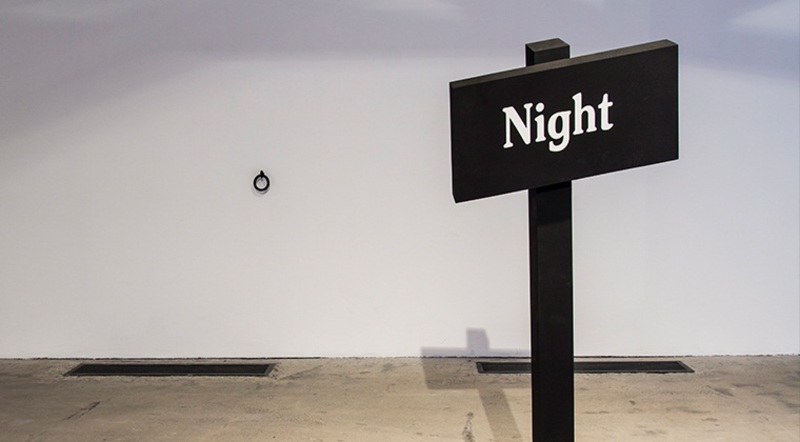 Knowing nothing about the TV show that provides the inspiration for this exhibition—and not really caring to learn more—I might suggest that the resonance of “Lost,” as theme, has at least as much to do here with the space of the Barnsdall itself. Passing from the entrance hall to the center of the exhibition area, one inevitably pauses, slightly disoriented, and wonders whether to go to the right or the left. The choice, in the end, matters little—either way, one enters an unaccountably labyrinthine series of side-rooms and booths, wending an apparently circuitous route that ends, somehow surprisingly, in the same place one began.

This eccentric layout can be used to great effect, as when, during my last trip to the Barnsdall for Made in LA, Victor Ramos' installation made me feel, for a moment, like I'd made a wrong turn and wandered into some mysterious backroom not meant for the general public. As one might expect, Marc-Olivier Wahler, the curator of Lost (in LA), often seems to be going for something similar here. Take, for instance, the strange double doors leading into the room housing Marnie Weber's genuinely repellent scarecrows, or the sometimes locked, closet-sized space home to Laurent Montaron's radio installation, which actually suffers from being too closely related to the overt topic. (According to a friend, the discovery of a radio signal, indicating the presence of other people on the island, is a major event early on in Lost.)

More broadly, despite the unifying efforts of Vincent Lamouroux's large-scale, high-hanging Milieu, 2012, the exhibition ends up balkanizing into areas of interesting and less interesting work. Only two rooms feel focused enough to truly stand out, but those are more than worth the visit. 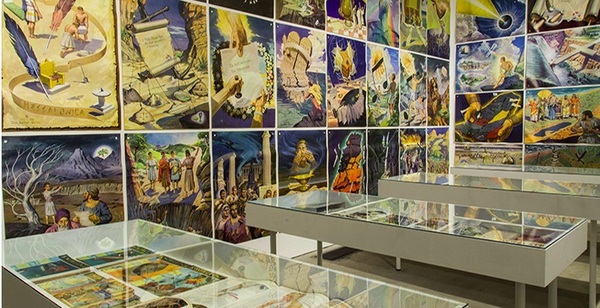 The first of these is a sub-exhibition of “didactic art” curated by Jim Shaw. Recalling the artist's controversial 1991 show of thrift store paintings, which displayed the work of probable cultural outsiders, the work here is drawn from as mainstream a source as American Protestantism. This room is almost certainly meant to play the role of “the Others” in the show's loose adaptation of Lost, and it's likely that many visitors will find themselves rooting for the villains. One wall is occupied by a series of white linen paintings explicating Biblical prophecy, ca. 1930, that are a joy to (however partially) decode. Their resonance is darkened by the fact that their creator, V. T. Houteff, is the founder of the “Shepherd's Rod,” a church that later gained infamy as the Branch Davidians. The other three walls are occupied by Walter Ohlson's circa-1960 Bethel Series, and the aesthetic pleasure of these absurdly allegorical, incongruously New Age paintings plays against their didactic content in a similar way.

Both artists use blatant visual metaphors that spatialize time, offering a visual analogue to Biblical chronologies, and thus provide the baldest answer to Wahler's call for formal links between the two categories. Yet our experience of these works is crucially altered by their presentation in an art context. In particular, Houteff's apocalypticism emerges as a mirror image of one of the core historical beliefs of art history, which places the value of art objects in relation to their ability to endure in time and understands this idealized longevity as the natural goal of artistic production. Rather than opening out into an ideally endless future, Houteff is concerned with marking the point where futurities end. As Shaw's readymade, these paintings raise alternate possibilities for imagining the temporality of an artwork.

The next room, culled almost entirely from private collections in LA, explores approaches to figuration and text, and it's the latter that's most compelling here. An envelope on which André Breton wrote words that simultaneously serve as images of their referents represents a Surrealist extension of Stéphane Mallarmé's pioneering exploration of poetry as a visual medium in 1897's Un coup de dés, and the Symbolist's influence is also to be seen in Fabrice Hyber's adjacent watercolor, 2001's Hyber projet pour..., where champagne bubbles echo the foam filling the elder poet's glass in his second most famous work, Salut.

This dialogue is further developed on the opposite wall in Guy de Cointet's drawings, which at once invite and resist reading. Their appearance here is uncommonly timely, given that 2012 saw the publication of an English translation of Quentin Meillassoux's The Number and the Siren, which makes the unprecedented argument that Un coup de dés actually encrypts the “unique number” it constantly refers to inside the text itself. In this light, the relationship between Mallarméan poetics and de Cointet's interest in cryptography seems ripe for reappraisal, and one is grateful for the opportunity afforded by this exhibition.

In the end, if the passion Marc-Olivier Wahler evinced for large-scale shows during his tenure at Palais de Tokyo produces about equally uneven results in translation here, the balance skews in favor of what succeeds. Though many will scoff at its theme, Lost is more often than not a thoughtful, compelling, and thus hugely welcome contribution to a dark year in LA art.