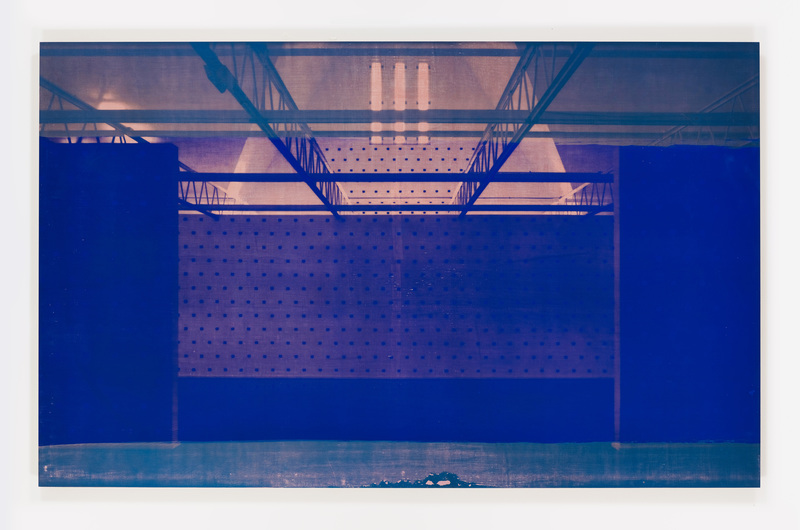 Susanne Ghez on R.H. Quaytman and the role of the Curator

Susanne Ghez, Executive Director of the Renaissance Society, will step down in January after a prestigious career shepherding this Chicago institution known for its impeccable programming in contemporary art. Ms. Ghez took the helm of the Ren, as it’s affectionately called, in 1974 with a meager budget of $25,000 and built one of the country’s premier, non-collecting institutions with a current yearly budget of $1.7 million. For her final exhibition with the Renaissance Society, she has selected the enigmatic postmodernist painter, R.H. Quaytman. A choice, Ms. Ghez tells us, that presented this veteran curator with challenges new and old as well as, we hope, “a new perspective.”

Joel Kuennen: R.H. Quaytman is best known for her Chapter series, begun in 2001, that acts as an interrogative visual archive – deploying imagery to stand in relation to one another. What drew you to Quaytman for this January exhibition?

Susanne Ghez: First and foremost, they are beautiful paintings, visually and intellectually. Her exhibitions are engaged, engaging, and very adroitly installed. The paintings have a self-conscious, reflexive, almost meditative air about them. They are a very calculated balancing act between abstraction and representation in the wake of conceptual art.

JK: In 2010, Quaytman said of her work, “making a painting which could be altered by its neighbor became the way to make one painting.” What do you believe are the merits of this kind of interrelated practice, especially since Quaytman doesn’t seem to be interested in developing a narrative per se but rather creating relationships through juxtaposition?

SG: In regards to that quote, it is telling that Rebecca has chosen the metaphor of the book, i.e. chapters, as the organizing principle. As you mention, while Rebecca is not interested in “developing narrative per se,” the metaphor of the book could be extended to become a metaphor for language in general where words, being distinct yet interrelated, are used to construct and communicate meaning.

SG: Rebecca is very much an open book in terms of articulating her methodology and intent. In addition, she installs her exhibitions. This could be seen as a co-opting of functions traditionally falling to curators. With respect to writing, while Rebecca is a curator’s dream come true, there is still plenty of room to construct a context independent of the frame provided by the artist. It is highly discursive work and her writing about it does not displace the curator’s labor. If anything it demands that you step up your game.

With respect to installing her work, this is hardly unique to Rebecca. I could come up with quite a list of artists (Luc Tuymans, Danh Vo, Richard Tuttle…off the top of my head) who determine the layout of their exhibition, which works are in and which works are out, and how they are to be displayed. Some artists are very confident about what they want, and others are more open, seeking dialogue with the curator. Some artists maintain a strict division of labor in that they make the work and the curator does the rest. That is to say, I wouldn’t privilege Rebecca’s practice as having something distinct to say to curators when it comes to selection and installation.

JK: What is interesting about the way that Quaytman installs her paintings?

SG: Nothing can be taken for granted. It is very calculated in relation to formal and historical aspects of the gallery space. She develops her exhibitions with a clear understanding of the space, both as a physical site and as a social site with a history and cultural meaning. The arrangement of her paintings is not only a spatio-temporal experience in its own right, but may also be read insofar as it may refer to previous exhibitions in that space, or perhaps previous installations of her work. 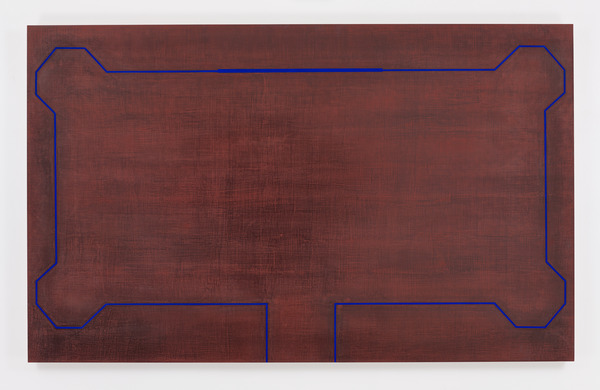 JK: Quaytman is also known for creating works in response to their intended sites of installation (i.e.: “The Sun” series and its relation to the Queens Museum of Art as well as “Distracting Distance, Chapter 16” and the Whitney). Are the works that will be presented in January at the Ren specifically made for this exhibition? How much of a role have you been playing in their site-specific conception?

SG: The works that Quaytman will show in January are being made specifically for the exhibition at The Renaissance Society. She spent several days looking through our archives, researching images, as well as interviewing Anne Rorimer and myself. I collaborated quite a bit with Anne when I first arrived in 1973 at The Renaissance Society. Anne Rorimer is one of Conceptual Art’s first historians and curators. Quaytman is especially interested in the history of The Society from the late 1970s and throughout the 80s, a time when we were presenting exhibitions of conceptual art alongside a generation operating under a different but not wholly unrelated paradigm. Many of the artists shown by Rorimer and myself, including Buren, Graham, Toroni, Asher, and Coleman, influenced Quaytman’s approach to painting. Architect John Vinci, another Chicago collaborator of Rorimer and myself, has allowed Quaytman access to his slide archive.

As for my role in developing the conception of the exhibition, I do not want to interfere with her artistic process. Once I commit to an artist, I place an enormous amount of trust in them. I have learned that artists need to have a great deal of freedom if I want them to create something new. There have been times when I have worried, when an artist did not communicate what they are planning until the last minute. But I have never been disappointed. I am there to support Quaytman, to answer questions, to talk about the exhibition, but I trust her completely. On the other hand, Quaytman is including me as an object of her research in developing the concept. It is a new role for me, and I am very curious to see how it all works out.

JK: What about the site-specific qualities of Quaytman’s work do you find necessary in the work of painting as a discipline?

SG: In Rebecca’s case, I prefer the term context-specific as “site” usually refers to the physical aspects of the gallery space. For Rebecca, to work in a context-specific manner is a matter of choice, and therefore there are no “qualities [in the work that I] find necessary [to] painting as a discipline.” Generationally, Rebecca squarely belongs to post-modernism, which unlike the previous generation, does not operate under the auspices of perfecting a modernist paradigm. The findings of the generation of painters working under conceptual/minimalist auspices could be deemed “necessary” in relation to that goal. A figure such as Daniel Buren, for example, found himself working at an historical moment such that site-specificity (working in situ as he refers to it) was methodologically and rigorously worked through specifically in painting and was and remains wholly necessary to painting as a discipline. Buren’s, and I’m sure Rebecca would agree, is a conclusive logic and therefore absolutely central to the paradigm of modernist painting whose mandate was to get at the essence of painting. Therefore it is necessary, or better, fundamental, in defining the discipline of painting.

SG: I’m somewhat confused by the first statement. Rebecca does not “collect” her work. She conceives of her exhibitions as specific groupings of paintings in which there is a clear distinction between the whole and its parts. But I don’t think that amounts to “collecting.” She is perfectly clear that the paintings are sold individually. That doesn’t preclude one from buying more than one painting or an entire show.

“Refusing the commodification of art” may have been viable for a moment, signaling an effort to maintain integrity to a certain set of artistic ideas and ideals. Over the past few decades, however, these ideals have been rendered hopelessly naive. Whether it is the machinations surrounding the purchase of a work by Tino Seghal or Damien Hirst’s auction orchestrations, there are no “alternatives” as they were once conceived in the mid 1970s. That sounds cynical, which is not my point. I think we can be honest about the pervasiveness of the market – not to demonize it, but to avoid willful ignorance.

JK: Your curatorial style has been celebrated for the amount of freedom you give artists in the installation of their exhibitions. How would you define your role as a curator? As an administrator? How do these two roles work together in your practice?

SG: I am very aware of the reciprocity between my roles as chief curator and executive director of the museum. Having the dual-role has given me a great deal of freedom to work with artists to produce ambitious exhibitions. I have often told artists, “Dream the dream, and we will find a way to make it happen.” It is so important not to allow financial considerations limit the scope of an artist’s production. On the other hand, it is equally important to be financially responsible. I am very proud that during my career at The Renaissance Society, I have always closed the annual budget in the black, and even more important, that I have done this without letting money considerations restrict my curatorial decisions. 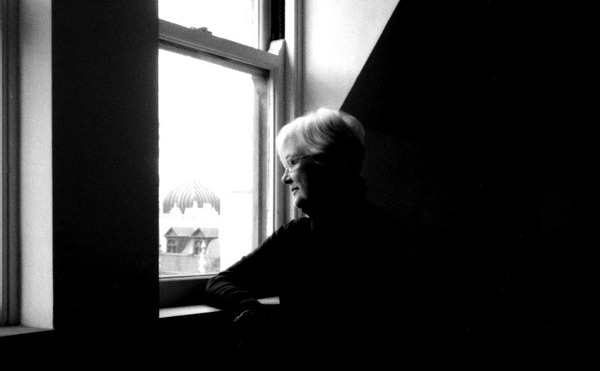 R. H. Quaytman, Passing Through The Opposite of What it Approaches, Chapter 25 (Polaroid of Susanne) , 2012, manipulated polaroid; Courtesy of the artist.

JK: You’re known for choosing artists who are on the cusp of their careers. What kind of research do you conduct when looking for the next exhibit? What qualities in an artist come to the fore?

SG: I am constantly looking at art. I go to galleries, museums, and art fairs all over the world. I talk to people whom I trust, other curators, artists, critics, gallerists, collectors – people who share my priorities and whose sensibilities I respect. I am always engaging in research; I am constantly looking at art; I am forever looking for new artists who are creating work that speaks to this moment.

As with Quaytman, I am drawn to work that is both formally and conceptually strong. I have worked with all kinds of artists – painters, photographers, film-makers, sculptors. The Renaissance Society has shown art made in Europe, Africa, Asia, the Americas, and Chicago. The museum has presented installations, figurative painting, abstract sculpture, found objects, photography, video. There are no restrictions for the media, national origin, or style of art we will exhibit. The quality that all these artists share is a relevance to our world – in ways that are political, philosophical, sociological – in many, many ways. But the work needs to be speaking about our moment in the world and teaching us something new and giving us a new perspective.