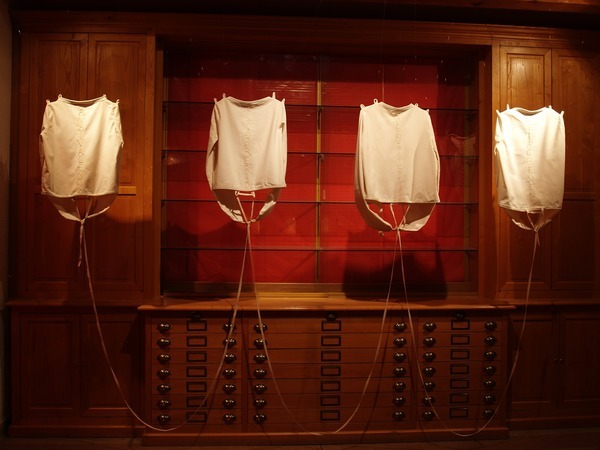 After a disappointing experience at the art studio: Met Peningehn  in Paris, Gwen Gerard joined the faculty of St. Charles Paris I, where she studied with Michel Journiac.  In the mid eighties, she began to show in alternative spaces (Génie de la Bastille, Art  Cloche etc.), Paris galleries (Space Trans-Art, Gallery Arthur) and international fairs ("Art Jonction" in Nice ,"Linéart" in Gend).

Then in 1991, Gwen Gerard moved for twelve years in Chicago USA, her work, while focused on painting  will then be directed towards the volume and installation. During this period she participated in multiple events (Around the Coyote) and continued  to show in galleries like Klein Artworks, Mindi OH, Beret International, World Tattoo etc. She was represented by the gallery IDAO and maintained close relations with the French Cultural Services in Chicago, which supported her work and especially in her project "Turning" in 1999 with the piece the "Exit Ferris Wheel".  In 2002  she went back in the south of France where she realized more and more projects in Situ as "De Retour" in Celles , "Il  Etait Une Fois" in Aniane or "Live-Motif" in Octon .

Alongside her career as an artist, Gwen Gerard is an  art therapist with people mostly melancholic and participates in the creation of the association TriplAAA.

Gwen Gerard was chosen as a Winner in Round #3 of the 2012 Showcase Series.

Posted by Abhilasha Singh on 6/17/12
Tags: mixed-media, installation
ArtSlant has shutdown. The website is currently running in a view-only mode to allow archiving of the content.