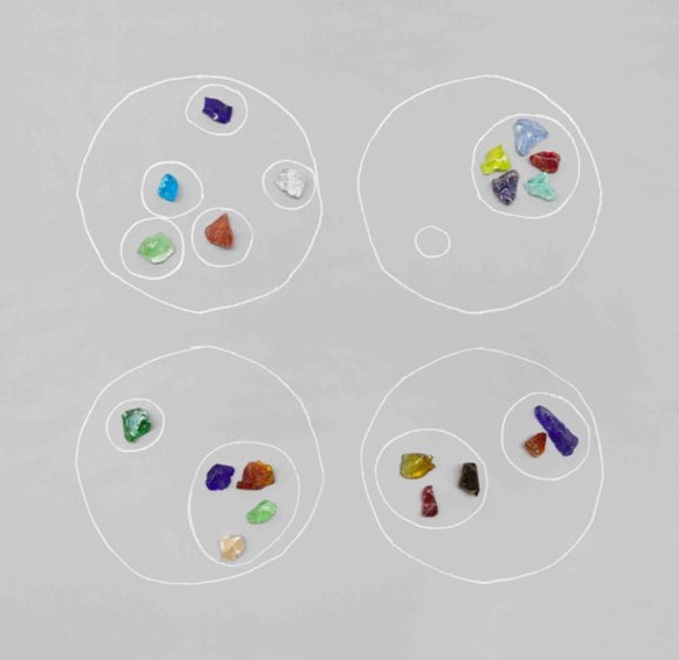 Color is part of reality

It is a game made with beautiful hunks of glass and written with chalk on the floor, some kind of conceptual art hopscotch. One probably shouldn't hop though. Each arrangement is a different play on numbers and markers, of how space works in fantastically simple reduction, a theory of sculpture, or so the title implies.

I see it, and then I read it. Then I compare what I read to what I see.

This a simple one. Glass and chalk. So basic, but with a beautiful simplicity that has that great gush of a good idea, clean and singular. Brancusi's Bird in Flight. Popeye's "I am what I am." Beckett's "I can't go on, I'll go on." The beautiful graphic they always use to illustrate Gestalt of three Pacmans arranged so that it looks like they're mouthing an invisible triangle.

A triangle is a good image here, as Mel Bochner said in an interview published in the early 90s, the first time these works were shown; "material" vs. "conceptual" is a false dialectic, and the "emotional" completes a triangle. Here the brilliant color of the hunks of glass are the motion, the emotion at work against ideas and things. 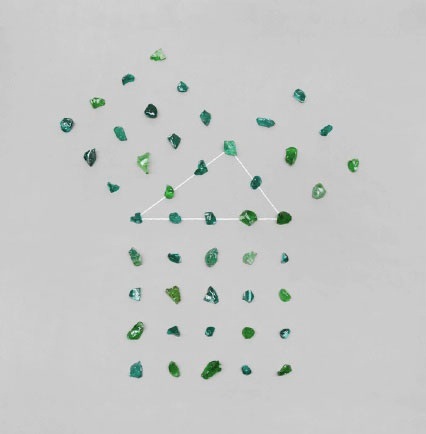 The glass pieces are scraps from the Murano factory collected by Lucio Fontana and left behind in his studio after his death. The arrangement of them and the chalk additions are the artwork made by Bochner. The arrangements make subtle jokes and diagrams about the nature of counting and space, geometry and numbers. Pythagoras makes a cameo.

Here, Bochner plays with these elements with the philosophical levity that made Conceptual art (which art historians see Bochner as one of the kingpins) so refreshing, graceful, and funny, especially after a generation of painters made artmaking seem so serious, heavy, emotional. Something about those early works of Conceptual art that seemed to cut back on ego and simply ask questions, play games, all sorts. Minimalism, where in some ways Bochner set out from, tried a similar kind of reduction, but accidentally replaced the heavy emotional content with actual heaviness: concrete, steel, and stone.

Here it is simple. Like a John Cage-y I Ching stick toss, or geomancy, a divination of a toss of rocks. It's appropriate maybe to invoke Sol Lewitt's "Conceptual artists are mystics rather than rationalists. They leap to conclusions that logic cannot reach." 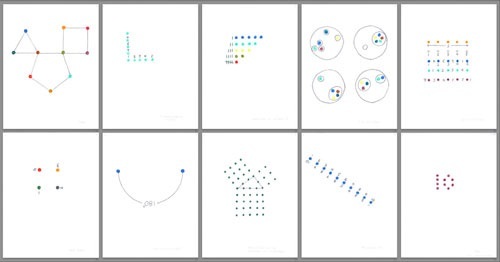 Bochner has done these arrangements before, these theories of sculptures, with very simple materials, pebbles, nuts, sticks, so that the idea would be more important than the poor materials. But as a gang of Italians figured out, poor materials count too. And here Bochner figured out a way to make color, and color as a vehicle of the emotional and spiritual count too.

A geometry, a puzzle, a stained glass window broken all over the floor. Arrayed just so.

Graham Macaulay Answers 5 Questions
5/18/18
COMMENTS (1)
Hi
Ilike
Comment by: Asharaf Elshrif on Sunday 04/01/12 at 7:27 PM
ArtSlant has shutdown. The website is currently running in a view-only mode to allow archiving of the content.