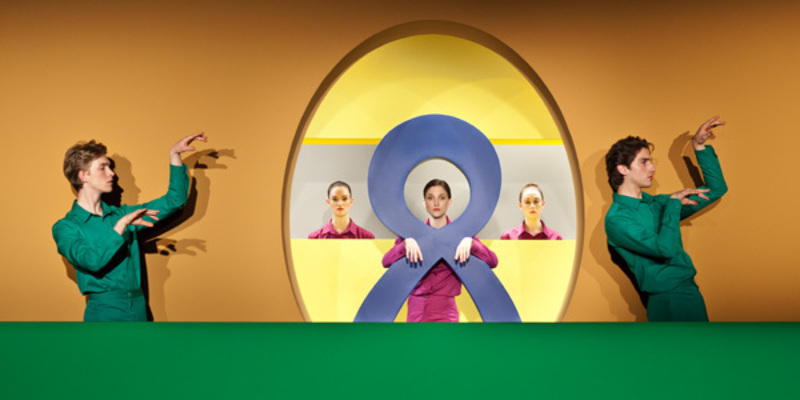 For the various spectacles conjured by a bright marquee on Wilshire Blvd. and promise of ballerinas from the New York City Ballet, Elad Lassry’s performance, Untitled (Presence 2005), which took place last Friday at the Hayworth Theater near MacArthur Park in Los Angeles, was surprisingly succinct. Six very young looking dancers, three men and three women, performed in monochromatic pantsuits (the woman in lilac, the men in emerald) against a moveable set, designed by Lassry, for about twenty minutes. Without music, the only sounds were of the dancers' slippered feet moving rhythmically on the stage; the sets, which included a couple wide, ceiling-high walls with oval and rectangular holes cut out of them and a tall, blue ribbon on wheels, being pushed around; and the firing of a spotlight turning off and on at the beginning of each short interval of choreography.

The function assigned to the spotlight was essentially that of a camera with an open aperture; each sequence became a long exposure. In the moment before the stage went black, dancers were framed either in elliptical instances—a simple gesture and look towards the audience from behind the second framing of a set piece—or after a more complicated sequence of dancing, which of course felt like a familiar cutting point. But overall the piece was so brief that typical expectations of conclusion were confounded. Only after Untitled (Presence 2005) had ended did one feel some kind of understanding of how the performance, in total, had been perceived or what it might suggest.

This was due in part perhaps to the pleasure found in the performance’s overall vision and the dancing itself, cut and pasted from famous works by such neoclassical choreographers as George Balanchine, often featuring a trope of dancerly dueling or step mirroring, and complemented by the rich colors and isolating potential of the sets. Placed in different configurations, they sometimes highlighted one part of the performers’ bodies (their faces, for instance) to the obfuscation of another (their feet). A non-hierarchical relationship of meaning seemed to emerge between the object and the movement, the dancer and the set. Lassry’s work is concerned primarily with different tactics of “framing” and the resulting discrepancies or affinities that emerge depending on how a subject is presented. Here was no exception, though the third element of the spotlight pushed the experience to another level, aiding in further dissecting perceptions of live performance: where we place our attention and why.

Dance, Modern Dance
1/23/12
COMMENTS (0)
ArtSlant has shutdown. The website is currently running in a view-only mode to allow archiving of the content.