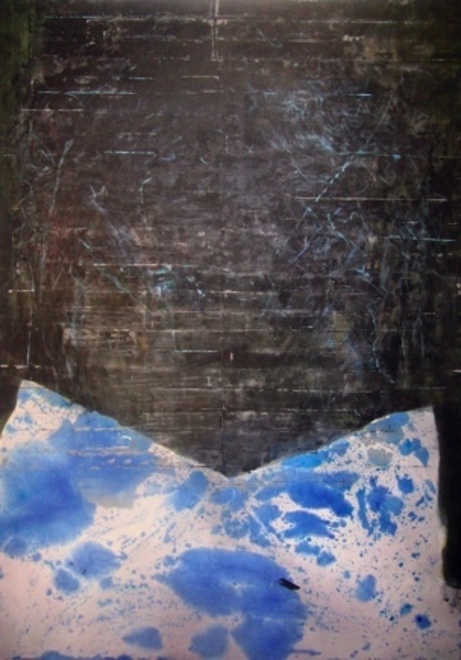 It’s hard not to take Branden Koch seriously when you walk into High Energy Constructs and see his paintings’ intermittently coarse and lyrical surfaces. It’s hard not to feel a melancholy weightiness when you read the limited edition broadside that hangs repeatedly on the gallery’s left wall: “The burden of history, ever changing, with it’s refusal to remain fixed in one place…” But, when you realize that the broadside depicts the squished face of a cartoon bulldog and that Koch uses absurd mechanisms, orchestrated paint spills, and found objects like Mayan hammocks to make his marks, it’s hard to take him seriously at all.

Maybe that’s the point: life is serious because we live it; absurdity is part of life, and we grapple with it constantly, which makes it serious too, even if it’s still illogical and silly.

Not Not Yet, a nearly 8 foot tall painting hanging on the gallery’s back wall, juxtaposes anthropomorphic white and blue splotched dunes with a striped, industrial expanse of blacks and grays (the lines in the painting’s background are imprints from Koch’s studio floor). In Holbox Repellant, the same lined background sets the stage for a swath of ghostly white that begins at the top right corner of the canvas and disperses outward, like the saturated glow from too many suburban street lamps shining at night (Koch used a hammock to render the white glow).

Severed from accounts of their making—ultimately, it doesn’t matter which absurd mechanism Koch used to birth his images; it just matters that he birthed them—the paintings become non-serial and non-narrative. Each explores what abstraction can be now: how can it close in on the bigness of experience without succumbing to the baggage of its aggrandized history?

The broadside, made by New York artists Ryan Harden Brown and Lucy Raven, doesn’t interfere with the non-serial quality of Koch’s work. Instead, it enacts a struggle that runs parallel to the paintings, questioning what it means to be at once bound to the consumer world and empowered by materiality. “The goal is no baggage,” declares the broadside. But that’s absurd. How can people move through a material, corporal world without dragging some sort of baggage with them?

“He didn’t know how to measure himself to what we call the Now,” writes novelist Don DeLillo in The Body Artist. “What is that anyway? It’s possible there’s no such thing for those who do not take it as a matter of faith.” Whether or not Koch takes it as a matter of faith, his work gives a strange portrait of now-ness. He has used accessible objects and tangible experiences to place absurdity in proximity to gravity, and procedure in proximity to expressiveness. Maybe small, tangible interactions bring us as close to the contemporary world’s vastness as we ever need to get.

Posted by Catherine Wagley on 11/17/08
RELATED ARTICLES
COMMENTS (0)
ArtSlant has shutdown. The website is currently running in a view-only mode to allow archiving of the content.