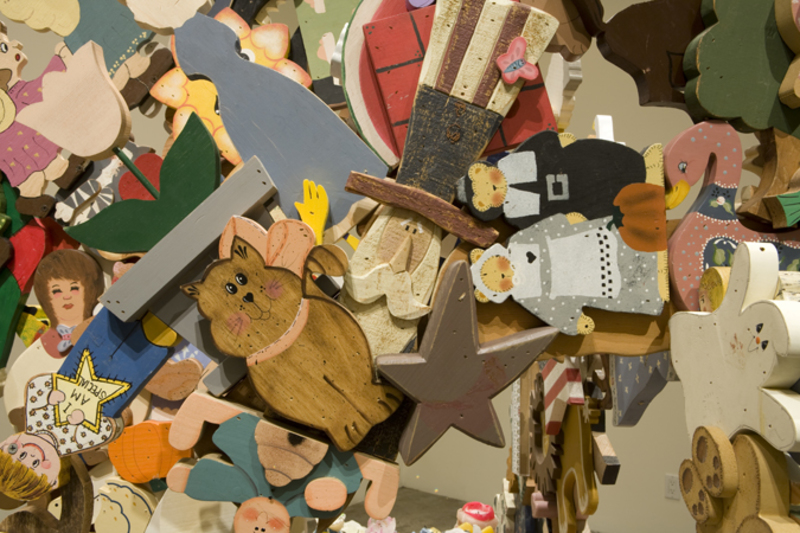 It wasn’t until I ran into a friend, the artist Michael Decker, the other day at St. Vincent De Paul Thrift Store in Lincoln Heights, that I really started thinking about how many other artists I know in Los Angeles whose practices involve significant time combing through thrift stores. They usually seek specific items: one friend spent the better part of a year looking for brass and fake brass plated bed frames and knick-knacks; another must have bought a least a hundreds pounds of used candles since I’ve known him. Decker claims he goes to a thrift store, minimum, once a day.

The artist-as-collector or creative scavenger is well-tread territory, especially in Los Angeles from Simon Rodia scrapping together the Watts Towers to assemblagists George Herms and Betye Saar, to the creepy kitsch aesthetic of Mike Kelley, to name only a few. What became more clear in talking to Decker as well as seeing his recently closed show at Steve Turner Contemporary, Adult Roman Numeral Thirty, was how much the whole practice of thrifting and art-making relates not only to recontextualizing an object but also, perhaps just as essentially, to the time and dilligence it takes to acquire it.

For his show, Decker composed almost every piece from found objects and almost every piece also focused on or incorporated some element or theme of duration, and more precisely, aging. Though not specifically made of found items, a series of twenty-nine gessoed panels called, We’re Getting Old, So Let’s Talk Like This, 2011, borrowed text from folksy wisdom plaques Decker collects from thrift stores. Fetal Ring, 2011, portrays an infant’s development cycle using ET dolls all made in 1982, the year of Decker’s birth. Destuffed, the dolls hung like limp skins, adding an extra play on the notion of the artist-as-hunter (of objects).  Or another sculpture, Trichomes, 2011, began from a collection of modernist glass candy bowls acquired over a year, which Decker then photographed and subsequently destroyed, refurbishing the shards of glass into one object that’s held together by an aggregate also made of the bowls.

This work and the exhibition as a whole reveal a relationship to time that is neither distinct nor pristine; instead an entire year is best represented by fragments, broken at will. Or perhaps broken because, for a collector, or even for an artist, the object itself can begin to take on an oppressive quality. Just as much as it’s supposed to serve as the thing of legacy, it also reminds you of your own mortality.

Very likely, it’ll be around longer than you.