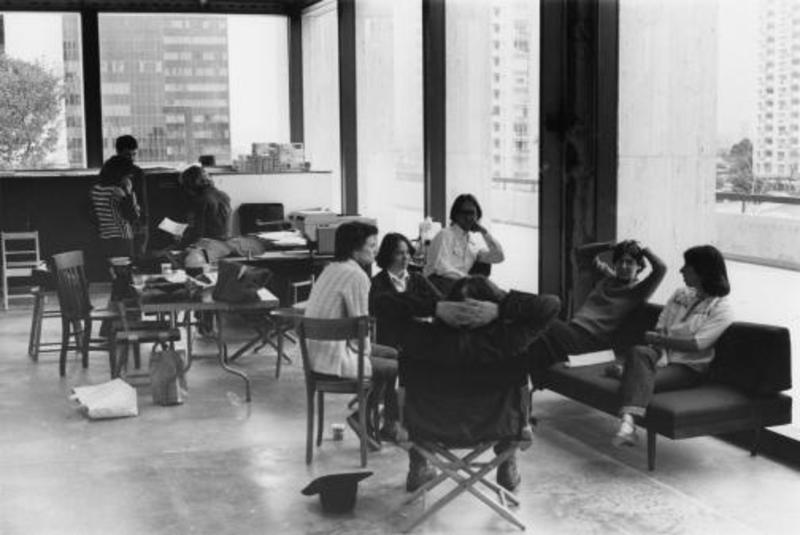 The Experimental Impulse is an exhibition cleverly poised as an archive, while the room itself looks a little like a leftover political campaign office. About a dozen tables covered in plain brown cardboard are set up in the gallery space, each with an array of pictures and documents, newsprint, old dial telephones, typewritten scraps of paper identifying the material and paint splattered school chairs whose seatbacks are tagged with their original locations from both the Art Department and Critical Studies branch of CalArts. Poignant quotations from artists and others working or collecting art in the time period of the show—roughly 1970-80—are printed out on plain pieces of paper, attached to one wall (a favorite by artist, Dorit Cypris: “All you have to do is ask. You have to have a great idea and position yourself as an equal to the people you’re asking. But all you have to do is ask.”) and on the other, blown up images found on the display tables.


But what is the show? The question alone is part of its appeal. Initially inspired by a seminar taught at CalArts in 2009-2011, The Experimental Impulse, is an open-ended foray into a particularly verdant time for conceptual art, radical pedagogy and alternative arts spaces in Los Angeles. And perhaps by way of compliment, the curators—painter and CalArts professor Thomas Lawson, the Gallery at REDCAT’s assistant curator, Aram Moshayedi, and the participants in their co-taught seminars at CalArts—have refrained from grand narratives here. Instead, with primary sources and tactile design, first person interviews and oblique storytelling, they end up creating a space for learning and thinking with an almost overwhelming amount of information.

The “impulse” of the exhibition’s title is mirrored in the inconclusiveness of its displays. Each of the tables incites curiosity and a desire to know more, provoking an initial germ of understanding: this is a place to start from. A cursory browsing of various documents gives way to an index of things to read or contextualize later: the original LACE downtown; the Los Angeles Institute of Contemporary Art; an Artforum article about the demise of the Pasadena Art Museum; Public Spirit, the first Los Angeles performance art festival; the Whole Earth Catalogue; Jacki Apple’s radio play, Last Rites at Angkor Wat and the history of Close Radio; CalArt’s early publication, Prologue to A Community and much more.

Like a quote by former CalArts professor, artist Michael Asher about his infamous twelve-hour-long Post-Studio class that’s included on the wall—“I basically did two things with my class; we took the clock out of the equation and forgot about time”—The Experimental Impulse displaces accepted conventions of time in an exhibition setting, giving the sense that it could go on indefinitely. And though REDCAT is only open six hours a day, the exhibition continues online at the East of Borneo site, as well.