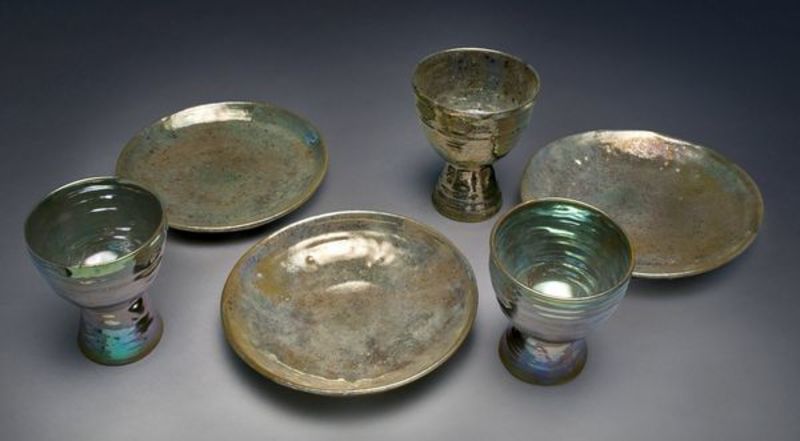 The Long and Ranging Career of Beatrice Wood

by Kate Wolf
It’s hard to imagine that during the sixty-eight years Sam Maloof and Beatrice Wood both lived in Southern California, the two would have never met. Their list of commonalities was long: both were native Californians who came to their chosen profession later in life, were primarily self-taught and survived and worked way into old age (Maloof passed away at 93, Wood at 105); both lived in rural settings and were a part of academic communities—Wood taught and built her home on site of the Happy Valley School in Ojai while Maloof constructed his in Alta Loma near the Claremont Colleges and was an active member of the arts there. Perhaps their greatest mutuality was that Wood and Maloof both approached their respective crafts with a focus on the handmade, singular object and despite substantial success, never turned to industrial reproduction. They were artisans of a pre-modern fashion who nevertheless made objects out of a modern context, each practicing a different form of crafted abstraction.

In “Beatrice Wood: Career Woman—Drawings, Paintings, Vessels and Objects,” currently on view at the Santa Monica Museum of Art as part of Pacific Standard Time, Wood’s connection to Dada, particularly Marcel Duchamp sets a precedent for her later work with clay. Alongside Duchamp, she helped to create the Dadaist publication, The Blind Man in New York in 1917. A handful of diaristic drawings on display in the exhibition’s backroom expose the young Wood’s infatuation with the artist, such as, 7:45 P.M.-Beatrice Waiting for Marcel, 1917. The sketches often also portray a scene of Wood’s early milieu—one of drawing room debates, female alienation and dramatic exigencies, such as a line written on the drawing Journee, 1917, that depicts a pregnant, love-battered woman in a series of agonized or anxious moments, reads “My God Give Me the Courage”).

The exhibition’s front room on the other hand, reveals Wood as an utterly confident and extremely gifted ceramic artist. Wood began making pottery at 40 after she moved back to California from New York, and was first inspired to do so by the desire for a lusterware (a type of metallic glaze) teapot to match some plates she had purchased in Amsterdam. Her luster pieces, range from a shimmering, fish skin-like iridescence to an all out sensation of alchemy, such as in a bulbous gold luster teapot from 1988 or other plates and cups that actually appear forged as opposed to thrown.

Wood used a handmade aesthetic without an overly naturalistic emphasis; her connection to Dada partially being that, many of the pieces on display seem to follow an art-from-art, form-from-form (not nature) philosophy. For instance, she was a master of the vessel, a kind of abstract object dating back from pre-antiquity, as well as the chalice. Some here are over a foot tall, their myriad looping handles evincing the nonsensical, almost surreal element of ornamentation. The pieces in the front room aren’t arranged chronologically and what becomes interesting is the chance to move through Wood’s work in simultaneous time, not necessarily charting a progression but instead experiencing the samplings of her prolific output all together and at once.

Posted by Kate Wolf on 10/17/11
RELATED ARTICLES
COMMENTS (0)
ArtSlant has shutdown. The website is currently running in a view-only mode to allow archiving of the content.