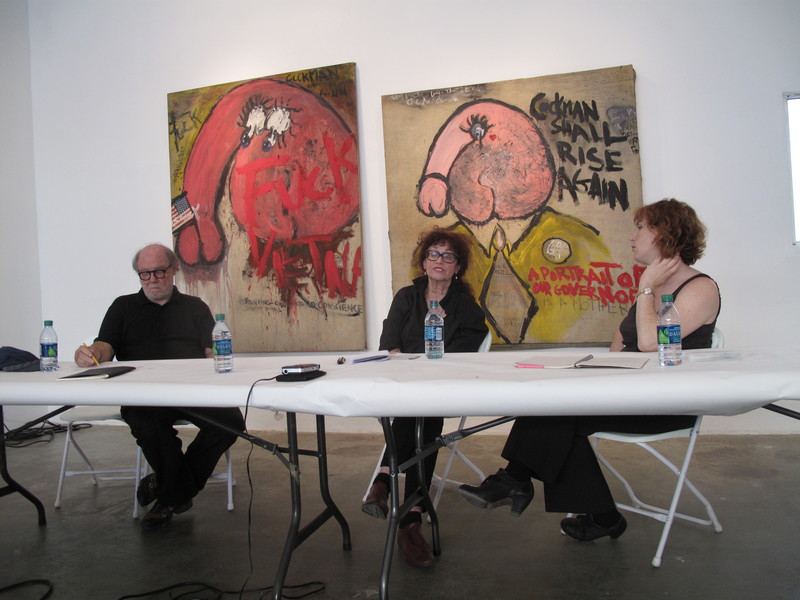 “I consciously wanted to make the ugliest paintings I could. I wanted them to be as ugly and horrifying as the war was,” said artist Judith Bernstein during an informal panel last weekend at Chinatown’s The Box, in honor of her current show there, “Fuck Vietnam.” Comprised of a series of explosive, explicit paintings Bernstein made between 1966-67, the works are being exhibited only now for the first time, almost fifty years later.

In the hour-long discussion between Bernstein, her gallerist Mara McCarthy and the gallerist’s father and longtime friend of Bernstein, artist Paul McCarthy, both Bernstein and the elder McCarthy spoke about their work in relationship to Vietnam. Bernstein said she found much of the text for her paintings written on the walls of male restrooms at Yale. She was interested in the scatological aspects of graffiti, its crudeness, the access it provided to the subconscious. 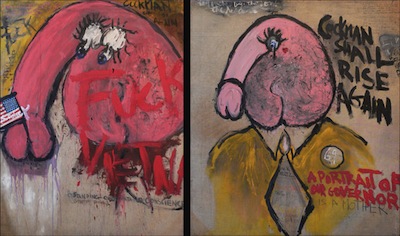 And then, there was also the gender issue. Bernstein was a proto-feminist, later a member of the all-women collective A.I.R. Gallery (she had suggested they go by T.W.A.T—Twenty Woman Artists Together—but was denied: “What can I say, I was ahead of my time.”). In light of Bernstein’s work, the phallus was a very appropriate topic of conversation. Not only for the literal and textual representations of penises in her paintings, but also since Vietnam, as opposed to American wars today, was a strictly male endeavor (not to mention the metaphorical cock-measuring of US v. USSR). Paul McCarthy, who ended up classified as a conscientious objector during the war, mostly because, “I was just a flake,” recalled the physical he underwent once he was drafted. The men were asked to take off their clothes, line up in a gym and wait to have their testicles inspected by the doctor. As McCarthy waited, he could hear the coughs moving down the line, getting closer and closer. He started laughing; he couldn’t help but seeing the event in terms of art. “The war affected my work,” McCarthy said. “I burnt all my paintings and would chop them through with axes.”

On the topic of the phallus he mused: “The erect penis is a tool, it’s a board or it’s a stick—it’s not part of the body… I very rarely draw a realistic penis,” McCarthy said, as though the thought had just then dawned on him.

Both Bernstein and McCarthy acknowledged the way that Vietnam, civil rights and the feminism of the sixties changed what art was, noting how performance art really started blossoming in 1970-71, as if somehow in direct relation to the years of resistance and protest preceding it. Both cited too the relative lack of overtly political work in the current art climate, which makes sense. It left me to wonder what it would be like if the wars in Iraq or Afghanistan had a draft, and every young artist had to confront the war personally, the way they did back in Vietnam.

It’s a question to which I’m fine not to know the answer.

Posted by Kate Wolf on 5/16/11
Tags: Vietnam-war performance, feminism painting
RELATED ARTICLES
COMMENTS (0)
ArtSlant has shutdown. The website is currently running in a view-only mode to allow archiving of the content.