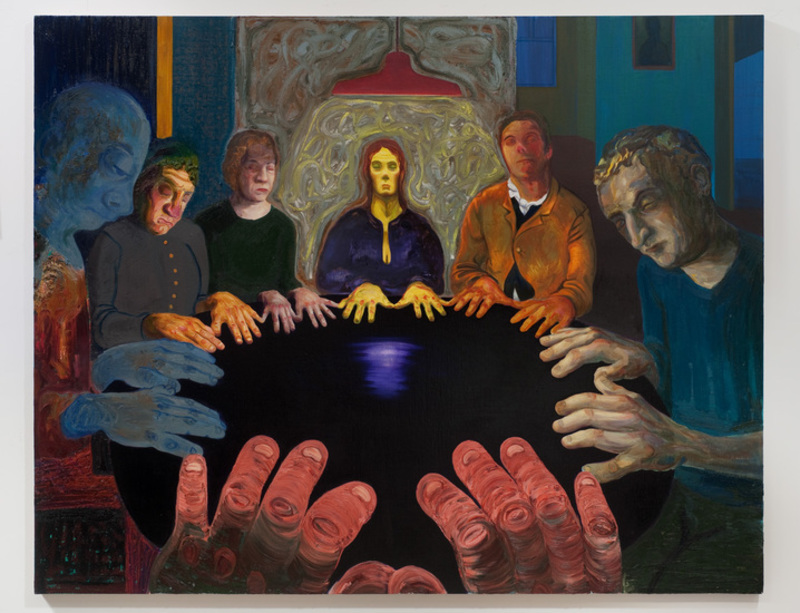 In her current solo show at Susanne Vielmetter, Nicole Eisenman continues to prove herself as a prolific and humorous artist, one whose blend of social commentary and human grotesquerie makes for a world edged in a slightly hallucinatory light. The hands on Eisenman’s subjects are bloated and awkward or sometimes ghoulishly slim, in one case, claws: they grope, they draw, they text, or they span out across a table in a circle as in her work Séance, 2011, attempting to make connections despite themselves, reaching for something sublime. In this body of paintings, Eisenman mixes overt art historical references— something she is well known for—with scatterings of recognizable contemporary life. There are both large historical overlays—like the series of primitivist male portraits in the gallery’s front room that announce their indebtedness to African masks and carvings (and by way of this, to Cubism and early twentieth century abstraction) by playfully collaging photos of them into the canvases themselves—or the three Kiss (Yellow Beach Kiss, Garden and Springtime Kiss, all 2011) paintings in the back, that carry out a classic trope in vibrant color, with an airy, expressive touch—and more subtle allusions as well. 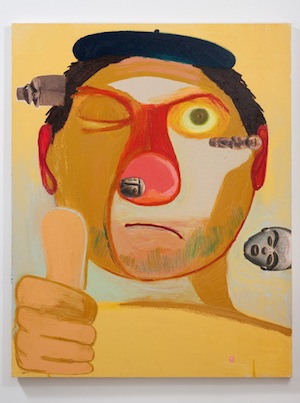 For anecdote, these paintings are not only about loneliness or its contemplation, as in Guy Reading The Stranger, 2011, (a work that features a painstakingly detailed bookshelf of such heavy philosophical tomes as Heidegger’s Being and Time) but also the need for the human connection—however goofy— found in the Kiss paintings, loose and sensual as they are, and probably the most thrilling in the show.

Part of Eisenman’s gift is her ability to wind myriad references to other painters and paintings tightly enough into her own work that they give way to a distinctive style and fictive sense of time. Still, there’s something vaguely vintage about many of these, making the sparing use of contemporary signifiers like Tea Party members or cell phones, as in The Breakup, 2011, more pronounced but in a compelling way: a reading of the current state of today’s isolation on the neutral surface of art’s eternity, or something like it.

Posted by Kate Wolf on 5/16/11
RELATED ARTICLES
COMMENTS (0)
ArtSlant has shutdown. The website is currently running in a view-only mode to allow archiving of the content.