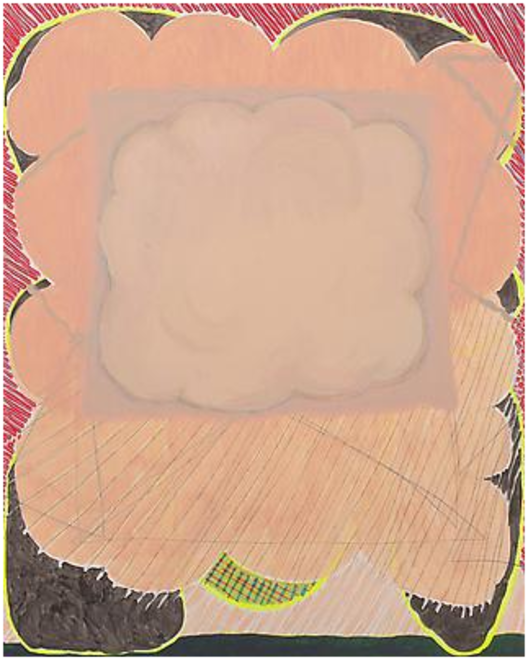 In trying to figure out why I feel this weird, instinctive pull towards Allison Miller’s paintings, why I like her newest exhibition of abstractions more than similar efforts by others (including those next door by Charline von Heyl, doyenne-ascendent of compellingly erratic and irregular abstraction), I ended up putting off words and turning to the act of painting itself.

It opened something up, but not necessarily to words. The impulse did, however, clarify. What makes Miller’s paintings gratifying to look at is a feeling of satisfying some non-linguistic, optical craving—a craving that has something to do with abstraction (color, shape, line, stroke, composition, surface, flatness, texture) as the means of conveying the aleatory, groping, and trusting one-on-one interaction between painter and painting.

Miller: “Having said that, I do think there is such a thing as a perfect painting for a specific moment, almost like a craving that you may not know you have until it is satisfied by a certain image you are lucky enough to remember or see at the right time.” [all quotations from Artslant's previous interview with Miller] 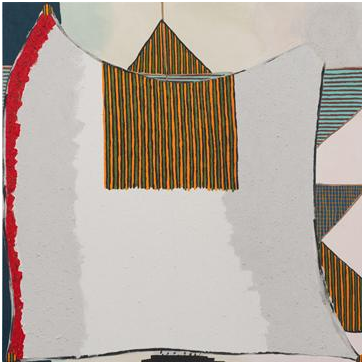 That Miller’s paintings might call for more painting in response makes some sense to me now: consciously felt with improvisatory nimbleness, rather than coherently planned out and premeditated, they made themselves openly available upon entering the gallery through their cocked familiarity and the reassuring ease with which they casually and seemingly spontaneously abandon their own pictorial schemes and systems, only to redirect their attention in other, related and tangential directions.

There are some recurring features and cravings that begin to unite these paintings under the specific mood of their making. Clouds or cumulus, thought-bubble, scalloped ovoids appear on several canvases, most straightforwardly in Untitled (Tan), 2010, in which cloud-forms stack up in semi-transparent, scumbled layers of tan skin tones towards the viewer until the frame is crammed full to bursting. This pushes a certain scale of visual activity to the periphery, the rim of space that one tracks with deep-seeded, animalian instinct out of the corners and on the sidelines of vision. Miller’s marginalizing of the composition’s more "detailed" incident occur in enough of the paintings as to constitute a strategy (most notably in Ring, 2011, with its beguilingly bold Matisse-cut-out-osity). Elsewhere, in Solid, 2011, clouds are pushed back into the background, both more referential as white billows of airy moisture in the sky and ambiguous enough in their density as to double as solids like mountains. 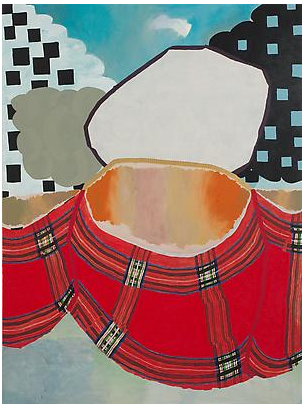 But, any landscape sense of spatial depth is rare to non-existent in these works; on the contrary, they are insistently flat fields—aerial and schematic, if terrestrial at all. Miller’s sense of space largely adheres to a collage-logic of overlapping shapes and lines, usually arranged according to patchwork organizational alignments (strata, axis, columns, and tons of hand-drawn grids and netting). Her particular pitch of abstraction channels the outer wavelengths of pattern, tapping its rhythm and graphic resonance. This strongly flattens pictorial space. Part of the collage-flatness also comes from Miller’s crucial, though not obvious, stress on surface through juxtaposed textures.

The paintings are marked by two particular levels of surface application. Preparing the gessoed ground of many of her canvases, the weave of the canvas becomes imperceptible under a super smooth, hard, shell-like treatment that makes thinly applied oil and acrylic subtly approximate gouache or watercolor. Its built-in hardness has a beautiful effect. The other key textural feature is the strategic thickening of regions of paint with dirt mixed in. Painting with the true grit of sandy, grainy, soiled sludge paint—mostly in off-whites and grays here—brings Dubuffet into the pictures’ lineage. 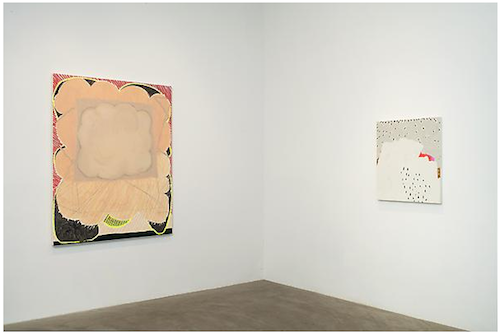 Everything underscores the visibility of Miller’s hand at work, or play, not as an expressive organ of emotive dynamism or catharsis, but as a curious, thinking, tentative, and idling creature drawing with paint.

Her wobbly and crooked configurations proceed from the manual directness of drawing with the chromatic coverage of painting. Indexing its own making as a chain reaction of uncomfortable decisions, Miller’s paintings satisfy a real, physiological craving for the sight of visceral idiosyncrasy.

Posted by Sarah Lehrer-Graiwer on 5/9/11
RELATED ARTICLES
COMMENTS (0)
ArtSlant has shutdown. The website is currently running in a view-only mode to allow archiving of the content.