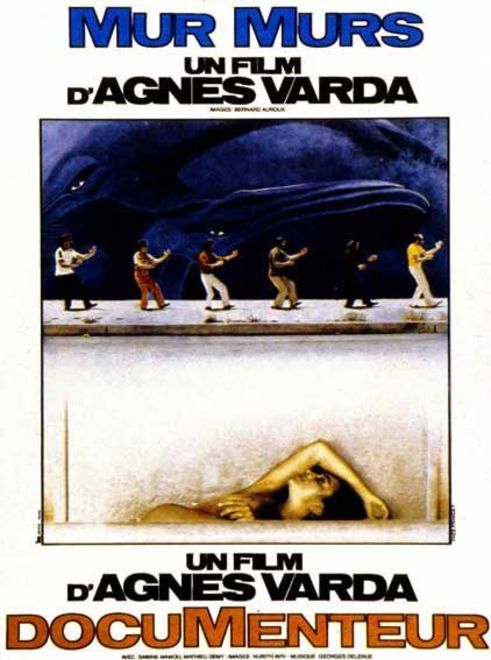 Sitings 4: The Walls of Los Angeles

Are there many other documentarians more puckish or thoughtful than Agnes Varda? In films like her well known Gleaners and I, Varda seems to combine humor, introspection and devote observation in striking balance; it’s never the last word on a subject but always a guileless conversation, ambling between lyrical essay, reportage, epistolary and visual free verse. Why there isn’t a box set of her documentaries available in the US, I’m not sure. And why her wonderful film Mur Murs, is not more readily available here in Los Angeles, where it takes place (a search for a copy last fall that included almost every possible outlet except the French consulate turned up empty. The film is available though, without English subtitles, on YouTube) is also cine-crime that must come to an end; soon I hope.

Shot while Varda was living in Los Angeles directing her feature Documenter in the early 1980’s, Mur Murs, whose title translates to Wall Walls and is also a pun on the word murmur, studies the ephemeral, mostly non-commercial art of mural painting.   “In Los Angeles,” Varda begins “one can visit the major studios of Hollywood and see the real stars of the cinema. Me, I mostly saw walls.” In the film, these “moral walls, speaking walls” do murmur, literally whispering the names of the many artists who have painted them. Varda zips around the city, to the roller skating scene on the Venice boardwalk and the Brig on Abbot Kinney, to Ramona Gardens, the oldest housing project in Los Angeles, to neighborhoods in East LA steeped in the Latin American tradition of mural painting (a young Willie Heron, the muralist and member of the performance group of Asco is featured) to the massive Farmer John complex in Vernon, shooting the workers there sharpening their knives, a lone glove resting on the ground, stained in blood. She awkwardly interviews Arno Jordan, the painter responsible for twelve years of work on the building and over 2,000 painted pigs, finding his name absent from the walls. Thus this section of the film pays homage and testament to the maker of the images, and material for “collective dreaming,” we in Los Angeles can still see today as much as other scenes record the many murals that we cannot. I’m grateful to have finally watched Mur Murs and now know a little bit more of what has been lost.