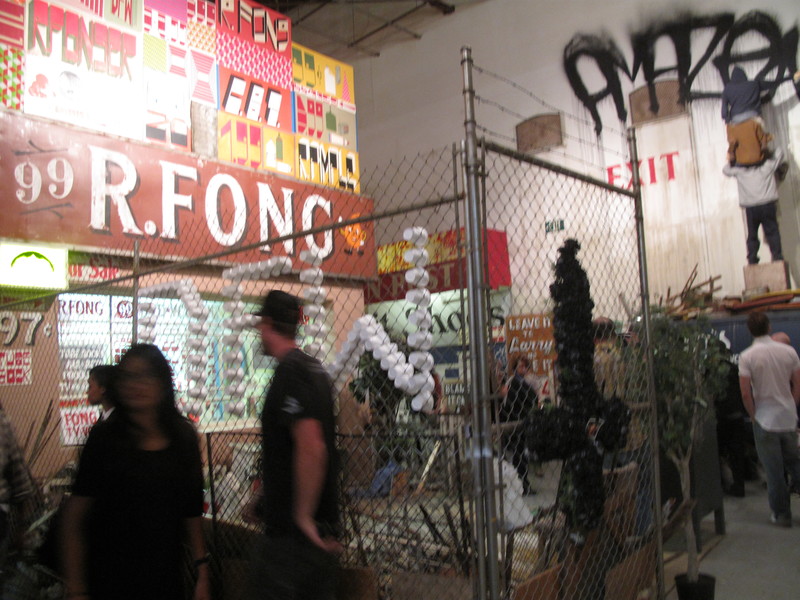 What is Street Art?

Like the notorious Banksy, it was an Englishman, Winston Churchill, who once said, history is written by the victors.  Wandering through “Art in the Streets” currently on view at MoCA’s Geffen, this old saying seemed especially relevant.  In just over a week, this retrospective of loosely defined “street art” that spans over forty years, is already experiencing record attendance, intense publicity, and, along with its very existence at a major contemporary art museum, it might all conspire to prove what appears to be the show’s main thesis: street art is the most important movement in visual culture since Pop. At least that’s what is claimed by the exhibition’s curators—Jeffrey Deitch, Aaron Rose and Roger Gastman—who also place themselves as an integral part of that history in a timeline accompanying the main gallery spaces (both Deitch’s and Rose’s separate commercial galleries and Rose’s book/show Beautiful Losers are noted as seminal landmarks). Are they correct?

While the lineage from Pop Art to the street art shown here is definitely clear, with both adopting the flat, repetitive tactics of advertising, signage, celebrity and comic book iconography into a parallel visual language that in both cases has entered back into the mainstream, and, in street art’s case, is now used to sell everything from sneakers to luxury handbags to presidents, it’s impossible to quantify the answer, especially when the very notion of the term "street artist" in this context is so compromised. From skate videos to punk portraits by Terry Richardson, the definition seems just amorphous enough to take on anything related to the apparel industry (which has kindly underwritten the show). Quite a few of the artists here have already had museum exhibitions and command high prices for their work at market. At his gallery, Deitch Projects, Jeffrey Deitch helped to launch the commercial careers of many in this show such as Shepard Fairey, Swoon and Barry McGee, a long time ago.

In the end, this loosely-cobbled-together movement’s retrospective charts the evolution of an aesthetic. It’s not so much about the controversy of inviting rough-edged graffiti artists into the prim halls of a museum, or the visual and formal mechanics of those who use spray paint and wheat paste. Instead, “Art in the Streets” attempts to uncover where a pervasive look that we now see all around, but I’m sadly only able to describe in relative terms (Vice Magazine comes to mind), came from. And in that vein, it’s pretty interesting.

The main problem with the show besides the normal pitfalls of any large retrospective seeking to define a broad geography and time period, is a startling lack of criticality, historical contextualization, and actual attention and description of visual style and detail. The argument that street art is such a monumental movement is not well served without a better use of art history. Many of the placards are given up to artist statements and larger descriptions of themes, locations, styles—any additional information that might help narrow focus in an exhibition of this size—are also absent in the main gallery space. Instead the show favors spectacle over substance. It’s poorly organized and done so by curators who appear too close in the making of a movement to define it clearly or explain it comprehensively to outsiders.

Despite this, there’s still plenty to see, such as the photos of Martha Cooper, a successor of older street photographers like Helen Levitt, that document the sometimes perilous mission of young graffiti writers in New York, or the prismatic paintings of Lady Pink which fluidly incorporate tagging onto the walls and bodies of their subjects (there’s a great one of three women—perhaps a self portrait of Pink, flanked by two prostitutes—in a holding cell); a photo installation and film by Bill Daniel, “Who is Bozo Texino?” that maps a sixteen-year search for the origins of rail graffiti; an unfinished sketch for a larger work by legend Lee Quiñones intuitively referencing graffiti as ancient hieroglyph with pyramids and Egyptian kings; and the lush, verging on homoerotic portraits of young skateboarders on the Venice boardwalk by Hugh Holland, that inspire the kind of reverence for young beauty and physical agility most often found in Greek sculpture. These are a few of the exhibition’s over fifty artists.

At this point, I think it’s obvious “Art in the Streets” will be a profitable show, at least one imagines as measured in ticket sales.  What remains uncertain though is whether this type of lax scholarship is a projection of Deitch’s future tenure at MOCA (further evidenced in his mishandling of Dennis Hopper). And hopefully that answer, as some have quickly concluded, isn’t already written on the wall.

Christopher Tavares Silva Answers 5 Questions
12/4/17
COMMENTS (2)
street art
the new book 3d street art by tectum is worth a look too
Comment by: Gary Palmer on Friday 07/08/11 at 4:07 AM
Everything is Pregnant with its Opposite
Thanks for the great report on this exhibition... I'm always glad to read a good critique when I know I won't make it somewhere to see something in person. It seems a shame no one there can get it together to take a good, close look at the oxymoronic nature of bringing street art inside and putting a pricetag on it. This kind of cynical co-optation -- that of anything subversive, anti-capitalist or grassroots -- is the REAL movement here. Whether it's street fashion, street art or street politics, the (phony) representation of authenticity in exchange for the bucks is shaping up to be the biggest cultural MOVEMENT of our time. I suppose though that any criticality would boost its cultural capital even more. Know what I mean? That is, the moment Dietch and co. find a way to make it look like they're actually indifferent to profit, and this is a big, conceptual, self-aware joke that is actually saying an even deeper fuck you to the system ... their hipness stock will only go up more, hence more collectors dollars, more ticket sales. --Mara http://fashiontrashology.wordpress.com
Comment by: Mara Goldwyn on Wednesday 05/04/11 at 7:41 AM
ArtSlant has shutdown. The website is currently running in a view-only mode to allow archiving of the content.