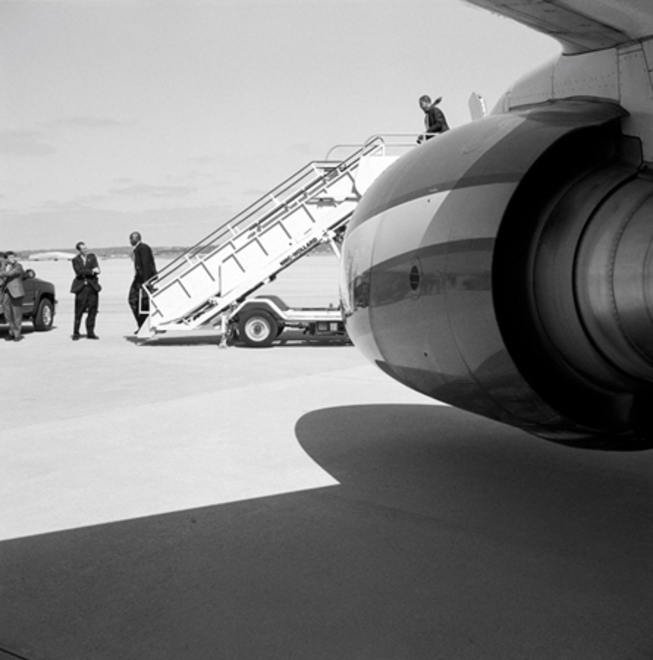 by Kate Wolf
What a nice surprise to see Larry Fink’s name included in the line-up at Actual Size’s current show, “Angle of Incidence.” Fink, who also just had an exhibition open at LACMA, is a well-known photographer but the type, like William Eggelston even, I tend to think of as getting sectioned off and left out of multiple artistic contexts. And that’s part of the strength of looking at Fink’s photographs outside of the photo ghetto and alongside the sculpture of J Patrick Walsh III. There’s a marked, formal relationship between the layers—the slant and ooze of Walsh’s rainbow blocks of melted candle wax— to the shapes and objects— the slope of an airplane wing, a removable staircase—and sections of shadow in Fink’s work. Both also happen to share a sense of motion in their composition. Here, Fink shows three black and white photos, all of which take place on an airport tarmac, two of which are from Obama’s presidential campaign trail. 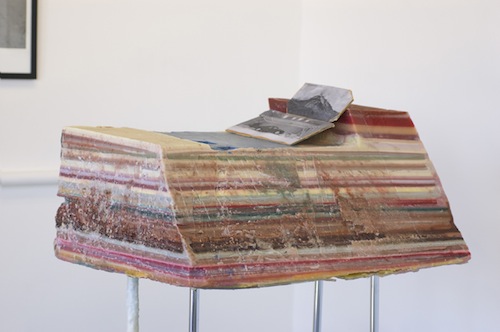 Transformation is another element that binds the work of these three artists, including the show’s third member, Alex Prager.  With Walsh’s sculptures, it’s through a manipulation and recasting of materials. For Fink, the transformation is the ability to change the way we normally see someone, often a public persona. President Obama’s daughter Sasha is shot from above in an odd expression that changes her from the pretty young girl we’re used to, into someone who looks agitated, aged by exhaustion. The president himself is shot from a distance, making him look small. The wind picks up his tie in the photo, suggesting a certain fragility or even spontaneity not often associated with politics. Prager does the exact opposite in her staging of a clichéd image. Unlike Fink, she is trying to create something we feel we’ve seen before, a composite that is completely controlled, transforming cultural sediments into something essential, condensed. Fink’s figures are all arriving or leaving; Prager’s blonde, beautiful damsel, also on the airport tarmac, has the bewildered, dramatic expression of someone being left.

Posted by Kate Wolf on 2/28/11
RELATED ARTICLES
COMMENTS (0)
ArtSlant has shutdown. The website is currently running in a view-only mode to allow archiving of the content.