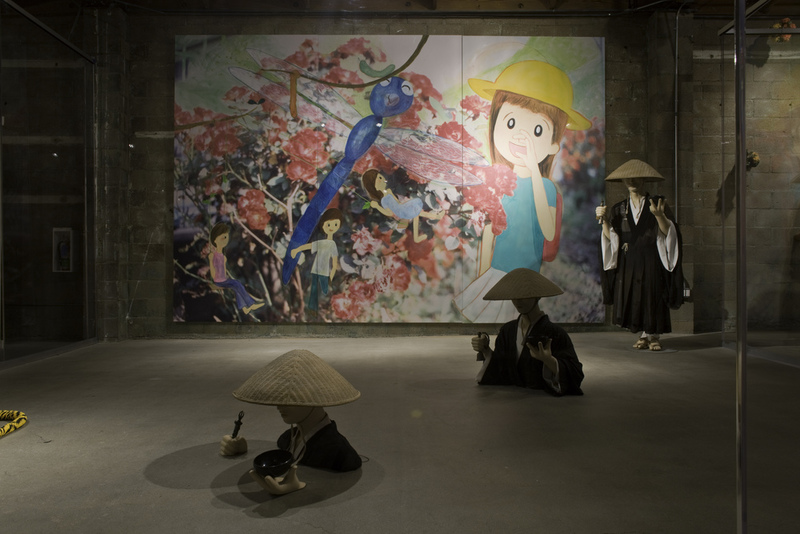 All of This is Melting Away

The group show, “All of This is Melting Away,” at Royal-T art space presents the work of 33 diverse artists in an imaginative, enlivening, and vibrant array of painting, mixed media, sculpture, pottery, and light and sound installation. Each of the 43 works somehow indicate a quality of fluctuation and variability, as implied by the show’s title, and suggest the motif of melting by combining mediums, blurring subjects, and experimenting with space.

The show as a whole destabilizes categorizations, including animate vs. inanimate and asleep vs. awake.  Childlike heads don animal costumes in a Yoshimoto Nara work, and Chiho Aoshima depicts a hybrid skyline with human, building, and landscape elements, while a Jeff Koons Balloon Dog epitomizes the exhibit’s ceaseless play with themes of childhood, buoyancy, and pop culture, and subversion of the tri-fold classification, animal-vegetable-mineral.  In several instances, ornamental eyes bring inanimate objects to life: in Olaf Breuning, plastic eyes personify tiny pottery pieces, and in Fred Wilson, several tadpole-like glass-blown drops gain consciousness merely through acquiring pupils.  Throughout, eyes open, drift sideways, stare downwards, and close tightly to adjust the vivacity and personality of the characters.

Humor plays a visible role in the cohesiveness of the show, where an overtly lighthearted piece, “Porta Party” by Nick Rodrigues, with a front that always reads “vacant” and internal spinning disco ball that can be seen through a thick screen, highlight, for example, the playful nature of Hans-Peter Feldmann’s nearby series of flower pots that jut horizontally from the wall.  Although the show predictably begins with the piece that is its namesake, Jim Hodges’ collage that reads, “All of This is Melting Away” (which is, ironically, itself Untitled), the rest of the show does not conform to conventional expectations.  The exhibition is stimulating, witty, enjoyable, and even thoughtful in its quirkiness. Suited to the space itself, which blends café, art space, and store, the show breaks spatial boundaries—occupying the spaces between, behind, and in front of glass barriers and sliding from wall to floor—and brings into question what it means to be awake and to be living.

Posted by Jenia Gorton on 8/31/08
RELATED ARTICLES
COMMENTS (0)
ArtSlant has shutdown. The website is currently running in a view-only mode to allow archiving of the content.