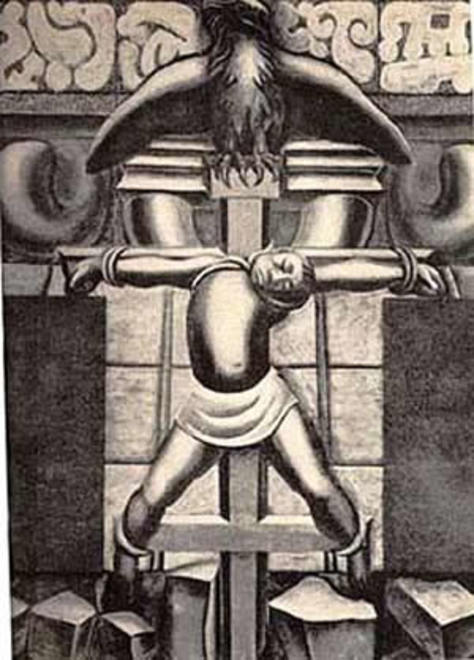 Los Angeles, with its lines of jacaranda trees like Capetown, its Mediterranean climate like Tangier, its corridors of empty space like Berlin, sometimes still reminds me most of Rome, a cityscape wherein one metaphysical glance can encompass thousands of years. In Rome you see time elapse from top to bottom, with current excavation sites openly on display, appearing like a kind of deep time, evidence of a city cutting closer to the origins of its past.

In the sprawl of Los Angeles, while the aperture is set wider— a hundred years in architecture might be charted from one side of a long boulevard to the other— there’s also the piling of history, it’s just better hidden (and excavation has never been one of this city’s strong suits). One must become a dedicated investigator to peer behind such a palimpsest. Last month the City of Los Angeles and the Getty broke ground on a project (a protective shelter and interpretive center) to exhibit and protect the mural by Mexican painter David Alfaro Siqueiros, America Tropical. Recently restored by the Getty Institute, the mural was partially covered up soon after it was unveiled almost 70 years ago because of controversial, anti-imperialist, imagery (its centerpiece is an Indian peasant, martyred on a double cross with an American eagle above its head). It was later completely white washed and might have remained unseen to this day if not for a group of politically engaged muralists who sought it out in the 1970s. By then, the original had begun to reemerge from under the paint.

Preservation is both the savior and the downside of uncovering urban layers. It takes money the City is not willing to spend on cultural, public artifacts. While protecting artworks of all kinds seems some kind of obvious responsibility, isolating them in a museum can also a problem. The mural, as one of the most rudimentary forms of public art, once so prolific in Los Angeles, is now diminishing rapidly because of graffiti, private property laws, unease with political content, changing tastes, and ongoing white washing. Without an estimate of how much a piece of art is physically worth the main question becomes only how much it’s costing. Hundreds of other lost murals exist in Los Angeles, probably most of which will never be uncovered. I wonder, why not invite a painter at the level of Siqueiros here, to paint something new? Or a mural so monetarily salient, its destruction would be preposterous? Though once painted on a wall, the public mural loses its fungibility as a floating commodity, and for roving capitalists, it often becomes worthless (as so many cities treat them), or priceless, depending on how you look at it?

Posted by Kate Wolf on 10/26/10
RELATED ARTICLES
COMMENTS (0)
ArtSlant has shutdown. The website is currently running in a view-only mode to allow archiving of the content.