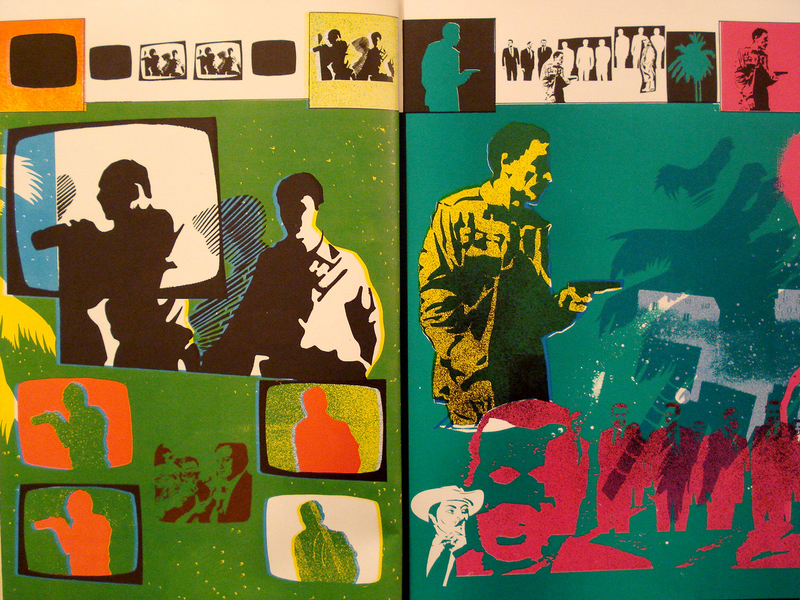 It helps me to look at the major work groups in Ehrenberg’s oeuvre as sections of a biographical film.

Part 2, black and white archival footage: 1968, Co-founder of Salon Independiente, a group of artists organizing in response to the repressive, censorial Mexican government, Ehrenberg is indelibly marked by the devastating pre-meditated Tlatelolco square massacre—government tanks and snipers mauling and picking off student demonstrators ten days before the opening of the Summer Olympics in Mexico City. Ehrenberg becomes a lifelong student of world politics.

Part 3: The iconoclastic artist lives in London and travels widely, memorably in 1970 wearing a one-eyed mask and demanding entrance to the Tate Museum, London, debating with well-spoken guards whether or not he himself is a work of art.

Part 4: The community-minded artist is recognized as a pioneer of conceptual art; on the big screen, we watch him lecture about art and politics, and create new terminologies for artists and nations. We watch him perform, layering narration in Nahuatl, Spanish and English over actions evoking ancient battles—the Iberian invasion of Mexico for instance. We watch him teach silk screening and bring photocopying machines to the Mexican countryside. As he has at different points in his life, he creates assemblages, appropriates violent images from the media to create stencil paintings, collages, and, as counterpoint to his immersion in themes of political violence, he makes erotic (but not creepy) drawings of women, and drawings of men and women in coitus.

A more prosaic background of the artist might read: Felipe Ehrenberg (born 1943) is a contemporary artist whose oeuvre includes book art objects, hinged paintings, collages, drawings, actions and performance. He is an artist, a curator, an activist, an organizer, outspoken, a teacher, writer, co-founder in 1971 of the Fluxus Beau Geste Press, founder in 1980 of the traveling mural and publishing workshop, H20 Haltos Ornos; in 1985, he established a quake victim help center in Mexico City; from 2000 to 2006 he was cultural attaché for the Mexican Embassy in São Paulo, Brazil.

And even though biopics tend to lionize their subjects and overindulge in personal details, I prefer to look at the artist through the cinematic filter of the biopic, or rather the exhibition as biopic. In this way at least, there are few tawdry details, and more art.

The exhibition in Long Beach begins in earnest for me with a film and mappings of Ehrenberg’s response to the 1970 London garbage collectors strike. For an action called Garbage Walk, Ehrenberg recorded the effects of the strike, through photographs, including images of the artist tracing the footprint of massive piles of garbage in white spray paint. In collaboration with other artists, Ehrenberg presented the exhibition, 7th Day Chicken where he displayed garbage and garbage bags and organized his documentation of the strike. A gallery visitor, angered by their presentation as art, literally and physically attacked these objects.

A remarkable pair of hinged panel paintings from 1997 bear the burdensome title: Tzotziles, members of the PRI [Revolutionary Institutional Party], attack with machetes a man suspected of sympathizing with EZLN [National Liberation Zapatista Army] on November 22. One panel painting is displayed on the wall, one could be displayed on the wall, but is transformed into a standing sculpture. The subject is the murder of the Zapatistas in Mexico, images ripped from Time Magazine, machetes in hands. It is meaningful that the work, like a subject in controversy, becomes malleable depending on who might be presenting it.

In another instance of transformation, Ehrenberg’s stencil-style book, Codex Aeroscriptus Ehrenbergensis, 1990, is displayed here as an open, two-sided environment, a model for urban space that might make at least one Bansky/Shepard Fairey fan into a history student.

Perhaps, thinking in grand terms about Ehrenberg, about art and politics in general, and in order to release the current immigration/border turnbuckle in California, Arizona, and elsewhere... in addition to making art, perhaps Ehrenberg ought to have a post out here advising a new Governor on imaginative solutions.

This is a short introduction to Felipe Ehrenberg, but by way of conclusion, I want to present Felipe Ehrenberg speaking for himself. In his assessment of problems, Ehrenberg is inclusive, assertive. In this extract from a recent interview at the University of Essex (accessible here), the artist re-invents accepted language. The problem of borders is our mutual responsibility, in part a language problem, a problem of imagination, and therefore an art problem:

It’s all very strange. I remember a very nice afternoon in Chicago, late summer, early fall. Windows were open, beer was flowing, dope was smoked, nice music. There was this lady called Franceschini or Fratellinni, from Philadelphia, I think. And she’s smiling at everybody dancing and suddenly turns to me and says “My god, you Latinos really know how to have fun!” And I answered “What do you mean, “you” Latinos?! You’re a Latino yourself!”. She frowns and says “Meee? I’m no Latino!”. “Your last name was Italian, right?” I asked, “well, you Italians invented the word Latino, you’re a Latin”. She actually seemed quite shocked by this concept. The point is, “Latino” is a demeaning word.

This “Latino” thing… the Mexicans… an enormous amount of Mexican Americans are not migrants. In the first place, what migrated was the border, not the people. In the second place, most of the people that have migrated since then speak their own languages, not Spanish. They speak Nahuatl, Huasteco, whatever. So calling them “Latinos” on the basis of a language… I mean it doesn’t work. Mexicans in general do not accept the classification.

Reference: The Age of Discrepancies: Art and Visual Culture in Mexico, 1968-1997, edited by Olivier Debroise, Turner/UNAM, 2007

Posted by Marcus Civin on 6/21/10
RELATED ARTICLES
COMMENTS (0)
ArtSlant has shutdown. The website is currently running in a view-only mode to allow archiving of the content.