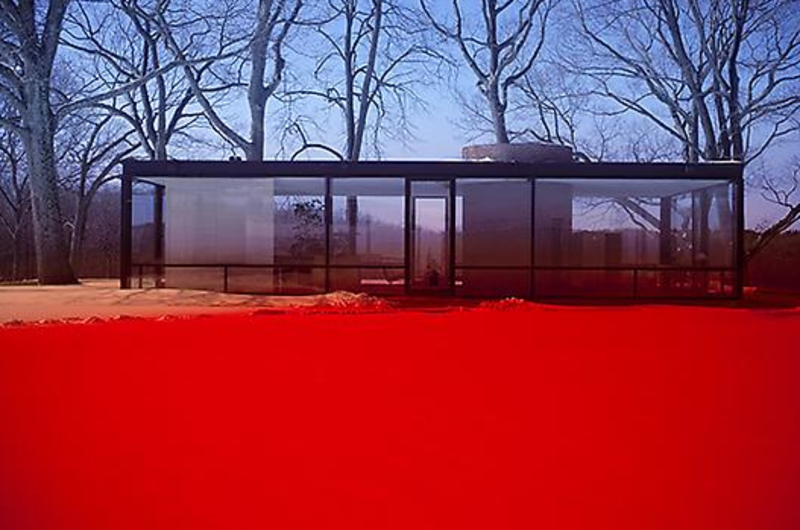 “For, facing a world that is unintelligible and enigmatic, our task is clear: we must make that world even more unintelligible, even more enigmatic.” – Jean Beaudrillard, The Vital Illusion, 2000

This may sound a bit earnest, but bear with me: you must go see James Welling Glass House at Regen Projects. Of the twenty photographs, you will have your favorites. Mine is 0462. ... 0462, an inkjet print, 40 3/4 x 57 1/4 inches, from 2009, this picture (titled after its number in the printer queue) is nothing less than a renew-your-faith-in-art experience: this surface and this image, an ominous smashing suggestion of catastrophic boundary violation, the slow moment ships still inevitably collide. From between girders, glass walls projecting out horror, our whole house determining the demise of our whole house, our whole house stuck in a frozen slice of red sea.

In addition to colored filters, I used clear glass, clear plastic, fogged plastic, pieces of glass that were slightly uneven or tinted, and finally a diffraction filter that breaks light into spectrums. Now I bring everything with me when I shoot, but initially I introduced new filters one by one. When I realized I could make the grass red or make sun flares, splatters, and different types of visual activity in front of this supposedly transparent house, or box, the project became a laboratory for ideas about transparency, reflectivity, and color.

A Pop version of this project appeared in New York Magazine in 2007. These magazine photographs, comprehensive of the buildings that make up the Glass House compound, nod to Welling’s peer Louise Lawler, washing in light Johnson’s art collection: George Segal, Lovers on a Bed II, plaster figures languor soaked in green; Warhol’s portrait grid of Johnson abandoned to blue, violet; a figurative sculpture by Elie Nadelman both among the Mies van der Rohe furniture and outside with the trees.

The dazzling photographs at Regen Projects cut light like a supernatural prism. We live in one-bedrooms, construct temporary walls with some scavenged lumber, drywall. At The Glass House, the General Admission will seem high, there will be mosquitoes, the tour guide will be a boy pulling apart a bug... When is lunch? Welling of simple photographic means. With Welling, Glass House, ‘simple’ means ‘sorcerer sneaking up.’ I am walking into no less than The Glass House virtual reality on the fritz. I would live at the edges of these photographs, overheard in video, running out, living one dab before slowing down to tumble into sublime sensuality and/or Armageddon.

Perhaps an over-determined misrecognition, but what the hell—crash!—what a joy to read in Welling, a left turn arrow towards Hakim Bey. Hakim Bey:

In other words, read now, broke and out of a job, living at home foreclosed, and referencing George Baker’s November 2008 essay, from Words Without Pictures, Photography and Abstraction, which itself references Frederic Jameson’s analysis of finance capital, credit collapse, James Welling’s abstraction amounts to a realist project that approaches an “aesthetics of the crash.” Sorry Johnson, the house is not only transparent, it reflects, it refracts, it’s getting expensive to keep up with the maintenance, and it might be sinking.

Posted by Marcus Civin on 2/23/10
RELATED ARTICLES
COMMENTS (1)
House
This location is perfect for this beautiful and elegant design. Thanks to share. http://www.yantramstudio.com/
Comment by: yantramstudio on Wednesday 04/18/18 at 10:24 AM
ArtSlant has shutdown. The website is currently running in a view-only mode to allow archiving of the content.