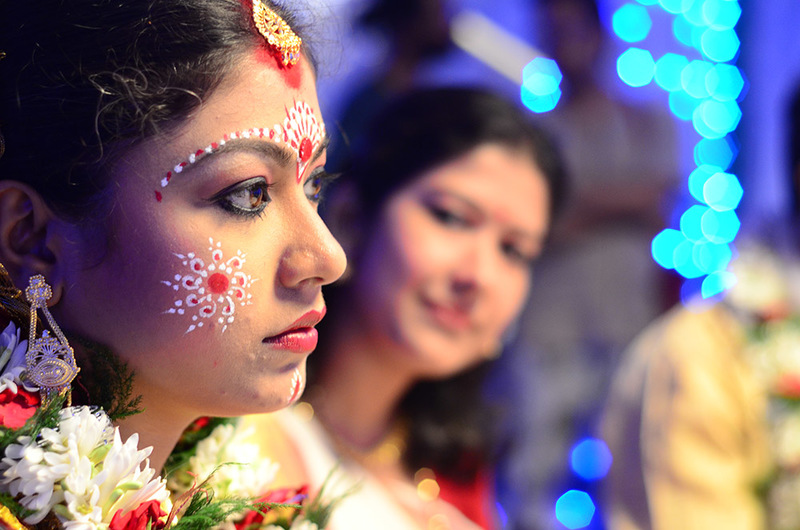 In Rati Chakravyuh, filmmaker Ashish Avikunthak presents several conceits. A single take of 102 minutes in a 105-minute film, screened as a very large projection at Chatterjee & Lal, has Rati, the Goddess of Love in Hindu mythology explored as the notion of desire through the ages, and Chakravyuh (a military formation mentioned in the Hindu epic Mahabharata that consists of a labyrinth of concentric circles) used as a defense mechanism. It’s a gauntlet that Avikunthak throws down from the start—a tight exercise in filmmaking that pits a circling camera against performers seated in a circle.

A camera tracks relentlessly around a group of six recently married couples and a priestess seated in discussion. In Alexander Sokurov’s Russian Ark, another single take narrative, the narrator, ghost-like, meanders through the Hermitage in Saint Petersburg, eavesdropping on conversations, inserting information, traipsing through the grandeur of ages, the camera following him from room to room. In Avikunthak’s film the field size is restricted to a single space, the courtyard of a temple; pillars have the speckled blur of trailing blue lights and a dying day is imagined in the gaps. The camera is confined, the protagonists stationary. What is animated is conversation—105 minutes of unceasing rememberings. As in Russian Ark, time is muddled, the real and fictive interwowen, myth and contemporary recounted in personal and collective histories. 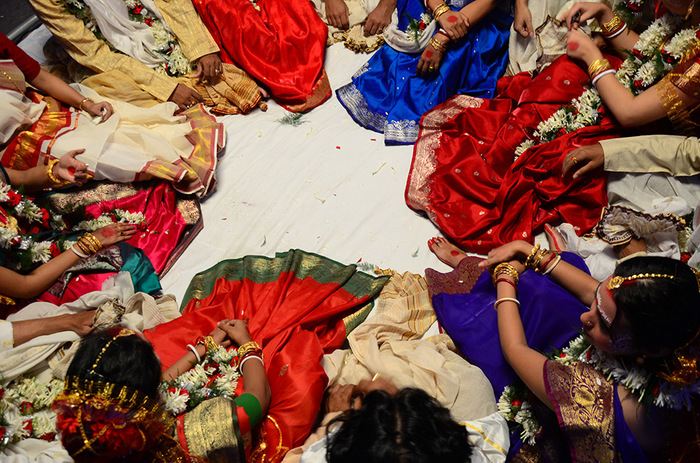 A single take demands rigour—behind and in front of the camera. Cuts and edits help progress a story; here the edit is the shot. It’s been an allure that directors haven’t been able to resist—Hitchcock, Welles, Tarkovsky—a test of the craft within the process. Hitchcock perfected suspense; Tarkovsky explored space, translated time into other dimensions. For a viewer, one suspends one’s breath, gets carried along in an immersive experience.

Avikunthak, using a similar procedure (with cameraman Basab Mullick), seems to aim for more than just the cinematic. Luminously lit, the focus stays on the performers. In enunciating from “in the beginning” to the “end,” performance art, theatre, film, and literature are interlaced. Like the repetitive warp and weft on a loom, a tapestry is woven. The circling never stops, the camera orbits, and staying on track, sometimes slows down, sometimes holds a face, sometimes pans to the non-speaker. This is the only variation a viewer is allowed. Removing surprise from within the visual, “now listen,” he seems to say, "there is no end to this shot."

And it’s much like what you hear: there is no end, no beginning, stories start/end/continue on themes that traverse time—desire, love, death, war. Through absurdities, nuance, and retelling, symbols from the past get incorporated into contemporary trajectories; the cycle of man and time just plays the same tread on different roads. In Vakratunda Swaha (2010), a previous work, the elephant-headed God Ganesha is similarly explored (the deity immersed in the sea, a gas mask as trunk). The ritual, the form, emergence and submergence, are thematically and technically explored.

Rati Chakravyuh is a rollercoaster ride. Vahanas (carriers) change humorously in stories; Hanuman, the monkey God from past tales becomes the red Maruti (monkey), the name of India’s first indigenous car that transported millions in the first wave of liberalization. Former Prime Minister Indira Gandhi’s death throws up quotidian remembrances, easily forgotten, but now marked for posterity: “I started my menstruation,” “I was waiting for a car,” “I was cycling on the terrace,” “my sister was born …”

An idea is mooted by one, then added onto by the next, recalled by a third in a later conversation. This symbolic looping of meaning within the dialogue—as reiteration, as recall—turns out to form an unintended device: that of a “loop” so intrinsic of video art within a gallery. This may be a long take and a film screened at fixed times, but one can walk in and out of the conversation, like one would catch a looped video. 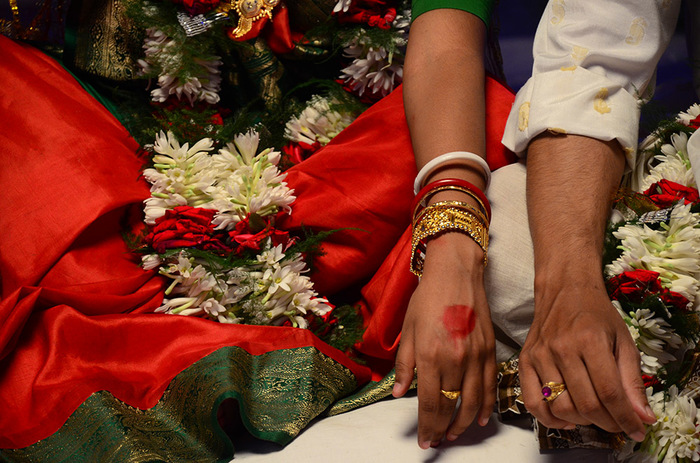 Gender travels time, too: a bride recalls her days as a son; protagonists speak of characters they were in the past; and like the Buddha, they are always dying. Sometimes it seems like a past life regeneration session. With multiple karmas spoken of simultaneously, it’s just “seasons of rioting.” “In the season of rioting” is a particularly engaging sequence; Avikunthak brings in the issues of the day: rape, infanticide, patriarchy, “the madness of sane men.”

“Ancient scriptures” are evoked repeatedly by right-wingers, to prescribe what is the ideal for Indian women. Avikunthak, irreverently, proscribes the orthodox claim of the submissive and virtuous; the women spoken of here are sensuous and confident. In an alternative take on the Ramayana (the epic tale of the abduction of Sita, by the ten-headed Ravana, and her rescue by her husband Rama), he overthrows the traditional narrative and inserts the 21st century into Sita. A Sita who enjoys Ravana as much as she loves Rama; the good she perceives in Rama is needed as much as she needs the evil Ravana’s ten heads and arms to arouse her. In the gravitas of ancient retold myths, Avikunthak gives the subaltern her due; Sita shines as the ancient world’s ultimate feminist. The ambivalence of today’s world contests a straight-jacketed tale handed down through the ages. Who is to say if Avikunthak or Valmiki is the Ramayana’s correct interpreter? At this adda (a gathering to discuss), all live multiple lives. Interpretations abound.

At the end of it all, there is death (we are told of a mass suicide, the reason or the means not needed to be known), the death of time, the death of the shot. It’s an endurance test for the performers as well as the viewer, a philosophical exploration of craft and concept, history, religion, and the contemporary. As a formal exercise, the rigor is well maintained both in front and behind the camera. His is a refreshing use of an “Indian” non-exotic, combined with precise formal structures in filmmaking.

After the whirlpool of thoughts one is put through, one wishes that like in an Edward Yang film the camera would have lingered that extra two seconds after the end of a take where thoughts can mull a little longer … one needs to dive one’s head into Albus Dumbledore’s Pensieve, leaving the muddled mind to unravel and decipher at leisure, before coming up for air. Perhaps the void in the center of the circle is Avikunthak’s Pensieve, the nothingness from which all things start, the black as the camera dies.