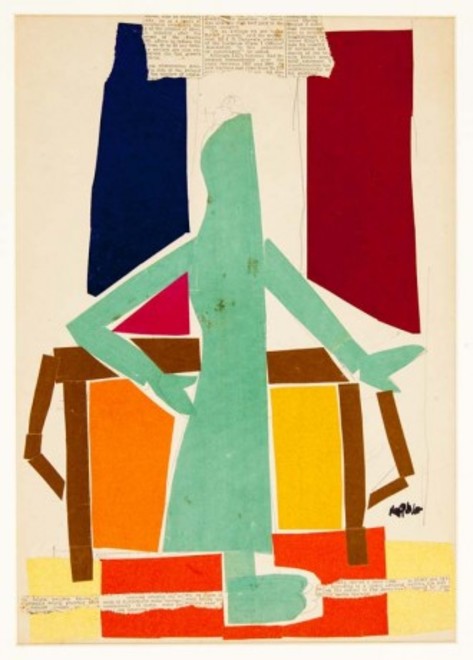 A collage of histories and meanings at Jhaveri Contemporary

‘Considering Collages’: a survey show of collages is exciting by definition because it’s a rare occurrence. Collages, especially the paper-and-glue  ( French ‘coller’ meaning ‘ to glue / to paste’) kinds,  which are often  playful experiments in forms, materials and contexts made from found objects,  tick exactly the wrong kind of boxes as far as the contemporary Indian art scene is concerned.

But the post 1947 collagescape at Jhaveri Contemporary with 14 artists ( born between 1882 and 1976 ) from the Indian subcontinent and the diaspora, induces more chuckles and raises more questions per square feet than most of the ongoing exhibitions.

Before walking in, it would be useful to  remember that the earliest Indian ones, the Sekahavati Collages and the earliest European ones  by Picasso and Braque coincided in time (1890s - 1910s) but not in their intentions. While the former explores the boundaries of culturally determined contexts the latter redefines the boundaries of surface and representation of dimensions. These two streams of intentions cross and uncross their paths across all the works displayed in this exhibition.

The joy of the chance- found is one of the main joys of creating and viewing collages and that’s there in plenty in Nandalal Bose’s (1882 - 1966)  torn brown paper and ink collages. More carefully planned, but just as playful are Benode Behari Mukherjee’s  (1904-1980) coloured paper collages made after his eyesight started failing in 1956. Interestingly, unlike Nandalal’s free-form, they are pre-planned (the preparatory pencil outlines could have been carried out by a student). Comparison with infirm Matisse’s decoupage are inevitable. But what’s also worth noting that all three of them got engrossed in these playful collages in their twilight years.  Even Abanindranath Tagore’s Kutum-Kataams,  doll-like constructs made up of found objects, were done very late in his life.

One of the reasons, perhaps collage is not taken seriously because, it is many a times,  a phase of experimentation and problem solving for the artist  before moving on to something more resolved and well-rounded.

K G Subramanyan’s (1924 -) Grey Studio (1966) done in New York City, is a far cry from his previous works and a striking diptych of pasted surfaces and paint- overs.

Just how powerful a meaning-maker can paint-over be is evident from Simryn Gill’s ( 1959 - ) work. With a few deft brush-strokes of paint on National Geographic Magazine pages, she rewrites the story altogether.

If Simryn Gill adds a sense of foreboding with her brush-strokes, C K Rajan (1960 - ) , adds hilarity with his scissors and glue. Dedicated to the medium for a while,with his Mild Terrors ( 1991-1996) series, he follows the tradition of collage-as-hybrid, the exquisite cadaver which doesn’t take itself too seriously.

Used magazine pages are all that Muhanned Cader (1966 - ) has in common with C K Rajan and Simryn Gill. He refashions those pages into imaginary landscapes fanning out over pages of glued-together moleskin notebooks.

The exploration of boundaries of contexts and dimensions take place simultaneously in the works of Bhupen Khakhar (1934 - 2003) , Dashrath Patel (1927 - 2010) and Anwar Jalal Shemza  (1928-1985). They all use unusual materials which make the collages two and a half-dimensional, much like the early modernist experiments on collages.

In The Sun and the Sea (1966), Shemza arranges the sawn off, unpainted legs of chairs, varying in diameter and height, to create an abstract landscape. In the wittily named Interactive Collage (1998), Dashrath Patel glues pieces of carved and coloured wood on a mirror, at once emphasizing and de-emphasizing the concepts of surface and (perceived) depth. Khakhar’s Wall of a small Hindu Temple (1966) is just that and yet not, with bits and bobs of Indian roadside ephemera stuck on the board surrounded by red paint resembling sindoor. These works remind the viewer the ‘telescopic’ or ‘boomerang-like’ delights and detours taken by the eye in modernist collages as described by Clement Greenberg. The eye goes back and forth between surfaces,between the real and perceived depths, between the ‘inside and ‘outside’ of the image, ricocheting between being deceived and undeceived.

If these works question the reality of dimensions, Mahbub Shah’s (1978 - ) collages gently rearranges visual reality with punch-cut ‘pixels’ taken out  from the pages of books and magazines. The result is a quasi-legible image, quivering between comprehension and randomness.  As if, looked from the correct angle, this visual puzzle will reveal itself.

This sense of  imminent transformation, haunts  Yamini Nayar’s (1975-) collages too. She is prone to collecting bits of waste – paper, foil, string, and other detritus – that she finds in the streets around her New York studio before photographing them from different angles. Untitled  1 ,2 (Malleable Structures) have more than a hint at structures constantly collapsing and rebuilding themselves with the trajectory of our eyes.

The most painterly of the collages are from F N Souza (1924 -2002),  Apnavi Thacker (1976-) and Alexander Gorlizki ( 1967 - ). Yet the most successful of Souza’s collages, Two Nudes on a Beach (1966)  come from a judicious mix of photography and paintbrush, ripe in the shock value of both change in contexts and Souza's characteristic  brashness. Apnavi Thacker’s collages from the Drawing Breath series (2013) have equal mixes  of surrealism and Victorian nature imagery. Here, the exquisite cadavers strike again. The junction of painted and pasted surfaces in Alexander Gorlizki’s Framing Options (2013) have to be hunted down and once found, rewards the patient viewer with meanings and possibilities.

Another level of delight is added when the entire exhibition is looked at as a metacollage, a collage of collages. By  choosing artists of different chronology and persuasions and juxtaposing them, it establishes itself as a deliberately non-linear art historical narrative.

If there’s one thread that runs through the 34 works by 14 artists in this exhibition, it’s the gradual disappearance of visible  junctions between the mismatched surfaces over time.

The glue has become metaphorical.