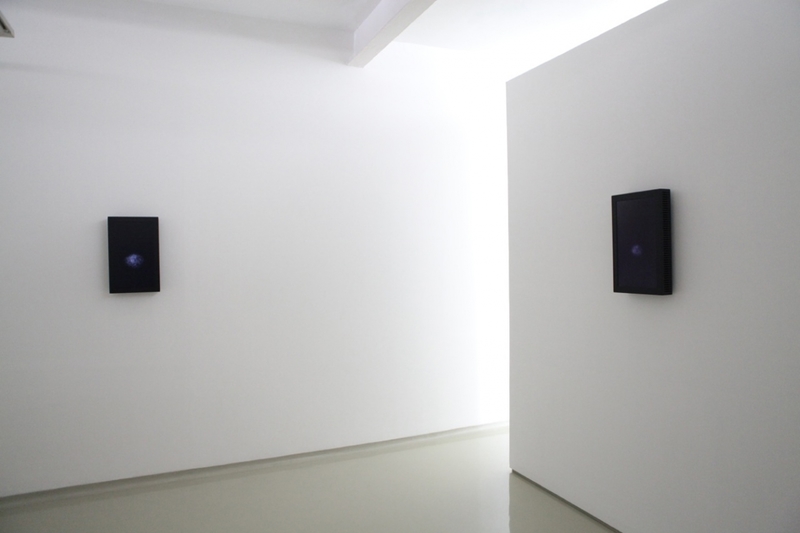 Being overtly spiritual doesn’t seem to be the norm  in the contemporary art world. It’s amusing, considering that contemporary  art world is more or less a faith-based system that combines ‘an uneasy godlessness with a religious memory’1: the  cult of a faithful few, visiting hallowed premises of esoteric objects, where meanings are made and unmade by the high priests of scholarship.

Thoughts like these are bound to cross one’s mind when one is en route to the first Indian solo exhibition of Shirazeh Houshiary, the Iran-born British artist who has been exploring questions of spirits - both human and spatial since the 1980s, with symbolic sculptures and drawings, steel chords, gold-leafed lead blocks,  anodized aluminium bricks, diaphanous veils of  pencil and pigment and delicate digital apparitions. It’s  tempting to pigeonhole her into the zone of  ‘Eastern mystique’ by mentioning her interest in Rumi and  Islamic calligraphy and then make her the glorious 'other’ of secular Western contemporary art. At the other extreme,  she has been clubbed with Anish Kapoor (with whom she shares a certain spiritual concern)and Julian Opie, just because of their contemporaneity.

But on viewing the eight paintings and a video installation ( “Origin”, a large format painting, , a suite of seven smaller paintings  titled “Presence” and the celebrated four-screen video “Breath” (2003 / 2011) ) in this exhibition, any sensitive viewer will be disarmed of all such preconceived notions.

“Art is a private affair”, says the artist in her humble, soothing voice in a 2011 interview , “but it leaves an imprint on the object and the only point of a public exhibition is the transfer of that imprint to the viewer’s mind.” And transference does happen, when you realise that the pellucid wafts of blue pigment in Origin (2012) is a mesh of two words (we are told) fana (annihilation or dissolution) and baqa (eternal presence) that are antitheses of each other, but instead of facing each other across the arena, they are inseparably together, almost impossible to tell apart. And this exploration of duality has always driven her work, be it  Altar, East Window (2011, Church of St-Martin-in-the-Fields, Trafalgar Square, London) inspired by the distorted reflection of a cross in water or the mystic envelope of Horizon (1997) she has been blurring the boundaries: of spirit (as finer matter) and matter (as condensed spirit), of interstellar and intercellular, of form (as frozen movement) and movement (as dynamic form)  and most importantly, of presence and absence.

And lest it seems something too ethereal to bother with, some quiet time in this silent gallery with her series Presence (2012) will make you think otherwise. Like the ancient concept of Noumenon, a presence that can not be grasped with senses, yet can still be felt, is  radiating from the skein-like lines on the compact frames. The lines of course are made of words but are rendered so, that 'the word loses its meaning and form is born from this. It is revealing the invisible.' As one of her viewers says, “you think you have got something and it has already moved on.” These blips on your perception, hinting at the imperceptible are what drive churches to commission her work and the cursory viewers stop in their tracks. At the risk of tarnishing this aura, one can’t but mention Lascaux Aquacryl colour, which the artist started using in the nineties, unshackling her work from the boundaries of mundane. This translucent, quick-drying acrylic colour makes these gauzy layers possible, suggesting  the very skin of our consciousness, punctured at places to give us a peek at the dark unconscious. An effect, very appropriately, almost impossible to capture with a camera and has to be experienced with our own eyes.

If the artist has strived to capture the uncapturable presence and absence in Origin and Presence, In Breath she has “choreographed” the breath of “four vocalists from different cultures”.  Four small screens in a dimly lit room glow with flickering splotches, in tune with four spiritual chants: the Islamic azaan, a Japanese Buddhist choir, a Jewish song and eleventh century German composer, Hildegard von Bingen’s Christian composition. But this is no made-to-order anthem for religious tolerance. Neither is this cheek-by-jowl multi-religiosity of India or Jerusalem,  the core here is the very  act of breathing, the original in and out, that makes us all human. No matter whichever way you are breathing while you are inside Breath, you will always feel perfectly in tune with the rest of the world.

If we really have to look for the art historical peers of Shirazeh Houshiary, we don’t have to look farther from Chladni, Kandinsky and the symbolists who refused to believe that as humans we have it all figured out and there lies nothing  beyond our ken.  It’s not too far-fetched to marvel at our mere existence  as a sum of whirling atoms of stardust spat out of a great void. In fact, it’s a necessity.