Does Quiet Meditation like roller coaster rides that make her dizzy? When a doleful morn meets a discomfiting confrontation, do they look each other in the eye? Does dollops of cathartic effect go with a tinge of alienation? Quaint Wit wishes to be introduced to the family of Graceful Rhythm – Is Graceful rhythm ready for the next “beat”? When metaphysical talks to material simplicity, is all lost in translation? Who will believe that violence and empathy had the perfect summer romance?

There's something about Yoko Ono's work that cuts across boundaries of various emotional affects, genres and even times. Her five decades of work in performance art, video, installation, film, music and poetry have most often focused on an anti-war message and feminist issues combining activism with art. “Our Beautiful Daughters”, Yoko Ono's first ever exhibition in India, invites its audience to participate in her art and activism, to establish a communion and to heal. The exhibition is accompanied by a parallel retrospective called, “The Seeds” which presents her iconic works like “Cut Piece” and “Bed Peace”. Alongside this are her public art projects: “Wish Tree” is inspired by her childhood experience of visiting a temple in Japan where she would write a wish on a paper and attach it to a tree branch. This project, initiated in 1996 has collected a million wishes of people around the world. These wishes are collected and finally sent to the Imagine Peace Tower in Iceland. Several wish trees have been placed in schools, hospitals, coffee shops, book stores and museums in Delhi. Her public instruction project uses advertising as a medium for art. Messages like "smile", "touch", "dream" and "our beautiful daughters" are displayed as banners in English and Hindi across the city. The artist's instruction postcards have been placed at various public places in the city. Her performance art piece, about which she said (in a press conference before the show), "You will create it with me", is titled “To India With Love”. It was realised for an exclusive audience who came out with mixed responses – from "absurd" to "humorous" and "radical". 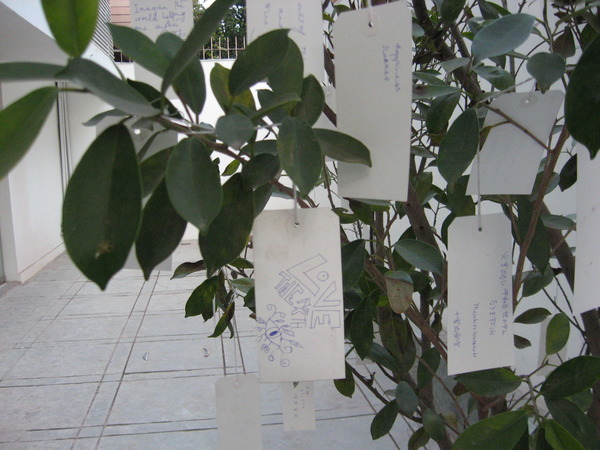 “The Seeds” provides historical citations to her work in a way that defies a linear trajectory. Films of her work, “Cut Piece” performed in New York (1965) and in Paris (2003) are projected on walls opposite each other. The two versions of the artworks speak to each other and their juxtaposition endows the pair with a greater significance than either would command on its own. People come and snip at the clothes of a young Yoko Ono ("angry and turbulent", according her own admission) on one wall and seventy years old (calm and accepting).  Also displayed are photographs from the worldwide “War is Over (if you want it)” campaign for peace that Ono and John Lennon led together in 1969. A film on “Bed Peace” (1969), the event performed by Ono and Lennon in protest of the Vietnam War, plays in a room plastered with maps of the Indian subcontinent on the walls (“India Map Piece”). The viewer is called upon to stamp the words "Imagine Peace" in different languages on the map. Stamping, usually signifying ownership and authority, plays the role of a silent prayer, a hope for the future here. 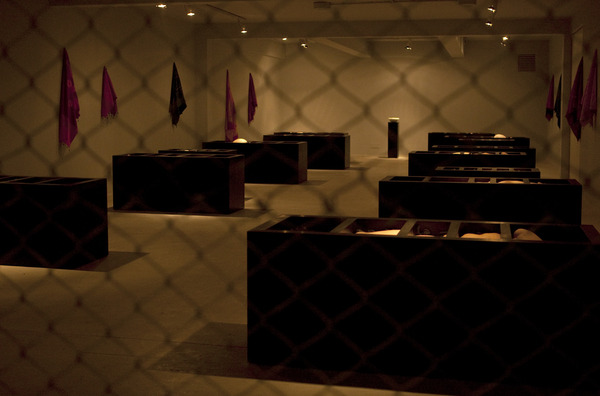 That life and art are not two separate realms of human existence is made vivid and sonorous through the artist's “Our Beautiful Daughters”. The installation “Remember Us” features headless, desiccated, naked silicon bodies of women lying on coal in black coffin-like containers and evokes the chilling resonance of witch-hunts and Sati. The viewer is confronted with dim lights on the carcasses of women of varied ages and body types; "Uncurse yourself" written in various languages on a wall in black; an ominous barbed wire gate; an aural track of bizarre noises abruptly followed by eerie silence; bowls of ash at the far end of the room – the installation fills one with horror, pity or the feeling of being violated. Is touching the bodies an act of establishing a connection or an act of abuse? Yoko Ono does not let us escape these questions as she mounts a confrontational attack on our senses and psyches.

What makes this work truly cutting edge is the artist’s commitment to collaboration, demonstrated through the engagement of Rajasthani weaver women to make covers for each of the bodies. These colourful and intricately hand-crafted “shrouds” hang next to each body as if in loving memory of the dead woman. “Mend Piece” and “Heal Together” are participatory art works that call upon people to stick together broken pieces of china and sew cloths onto a large, slashed canvas. There is a purging of the soul that takes place in the process of this collective repairing of the broken. It gives courage and allows one to forgive and come together to rebuild a world splintered by war and hatred. The work, “My Mommy is Beautiful” is a tribute to all mothers in the world from their children. Large white canvases have been filled up with colour and emotion in the form of hundreds of memoirs written to mothers. The messages range from humorous to confessional to philosophical. One note read: "The reason I fight for the environment is that I always want you to have the gardens you love." While another said: "Mummy <3 She would clean this thinking I wrote on a white wall." In another room, sitting on a bench, you click your own photo that will become part of the artist's ongoing project -- “smile film”. This work was a concept that Yoko Ono came up with in the 1967, a desire to make a film that included the smiling face of every person in the world. 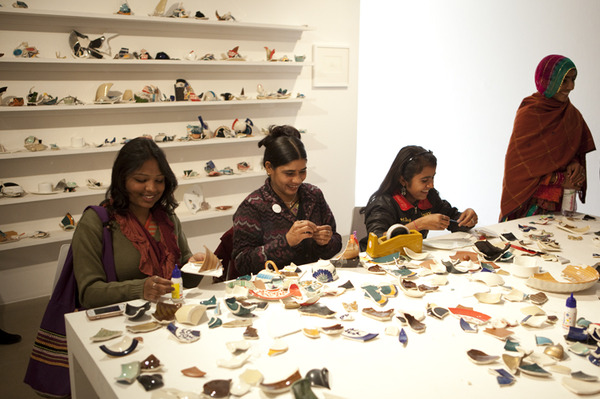 Through the years, Ono has maintained the spirit of the Fluxus movement of which she was an active part in the 60s through her inter-media work, subtle humour and Zen-like minimalism, eschewing classifications. Yoko Ono may be a relic from times long forgotten but her appeal to what is humane within us is still stirring. Her ideas of "peace", "beauty" and "healing the world through women's power" might be appealing to simple universalism but her understanding of the world that she inhabits is far from reductive or naïve. The artist said this about her performance piece at a press conference: “That one hour [of the performance] will never happen again even if I perform the piece again for the very same audience because the lives of the audience members would have changed... We can't be the same people again. That's how our lives are. Fleeting.”

Ephemeral though our lives may be, the relevance and affective quality of some experiences is not. Ono's art is one of them. She quietly meditates through a dizzying roller coaster ride and introduces Quaint Wit to the family of Graceful Rhythm in her work.

Under the Radar: Beatriz Guzman | Graham Skeate | Robin Wen
9/27/18
COMMENTS (1)
Robin Jennings
Yoko has been consistently sticking to her ideas of peace and female power for longer than anyone I can remember. Good to see the fire in her belly still burns strong.
Comment by: Explainafide on Tuesday 01/24/12 at 10:02 AM
ArtSlant has shutdown. The website is currently running in a view-only mode to allow archiving of the content.