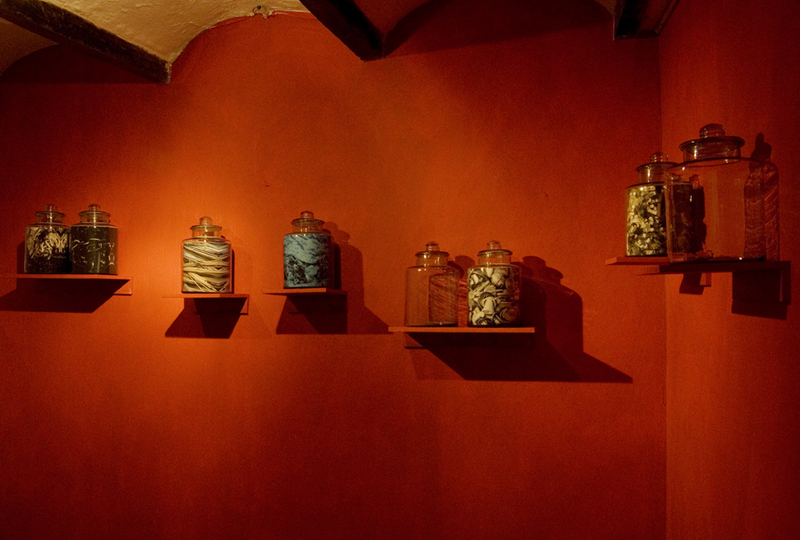 Paper Tongues is cleverly curated: though seemingly dictatorial in form and medium, it does not limit its artists to employing paper simply as a medium. It extends into paper as a function of the preservation of manifesto, and an 'exchange of ideas’. The concept note refers to the work growing from a desire to Change, and whilst the decay of society is commonly an artist’s inspiration, the exhibition did not strike me as socially charged or created by 'revolutionary dreamers’. Rather, it struck me as about a Return to Beauty. You are welcomed into the gallery by a giant sunflower of white paper (Sachin George Sebastian) that somehow has a restless, eternal quality about it. You turn the corner, and paper flowers are everywhere. This is what heaven would look like were it made of white paper flowers, you muse. There are thin white ink drawings that seem like the cerebellum of a waif (Sunil Padwal), a Gandhi toy rendered twenty times in a different veil (Ravi Kumar Kashi) and a more violent and politically charged watercolor that abruptly wakes you from the white reverie, reminding you of unjust Heros (Pratul Dash).

Sandeep Biswas' jars, however, took me by surprise. The aesthetic of stacking -- of clumps of stuff -- remains, yet the medium and dimension has changed. I smile to myself.

Seen above is a review that I wrote for Take on Art Magazine (based in Delhi) on his show at Ashna Gallery last year. I mention a need to see the artist working beyond the two-dimensional, and we have a conversation about the simultaneous depth and emptiness of the gallery. He calls me for the opening of this show, referring to the review from last year. It made me ruminate over the relationship between an artist and a critic, and how the two can influence and create each other. Here is an interview with Sandeep below, pondering these ideas.

Himali Singh Soin: Lets return to your show in 2010 at Ashna. What was the theme, process and evolution of that show?

Sandeep Biswas: My work has always been about my existence as an urban being and a reaction towards its complexities. It deals, primarily, with personal and physical space. My show URBAN GAZE at Ashna Gallery in April 2010 was a result of such an exploration and it referred to the way in which we create artificial spaces and polish them to look beautiful. The truth remains that it’s still a chaos.

HS: Your recent show has a similar aesthetic of photographs, although with a lot more color. Photographs of things stacked and piled onto one another, somehow floating in an ether. This time, however, these photographs are not hung in frames, rather wrapped into empty glass jars. Talk about this idea and how you came to create this innovative new canvas.

SB: I was already working on the images for this show at the time of my last show. But I put them aside as I could never imagine them as framed photographs: they seemed repetitive and out of place in that conventional wall format. At that moment, I had no idea what I would do with them, and although they did communicate what I wanted to express, they seemed incomplete. [The images are of piles of PVC pipes, various metallic objects, chains, cloth, gunny bags, perforated cardboard rolls, utensils, etc.]

Months after the Ashna show, I returned to these images and began wondering how I could present them differently, without losing the context and bringing it out with a fresh perspective. I thought of various objects and ways of dealing with the work and then the jars dawned on me.  I thought of the jars as they symbolize space and organizing space 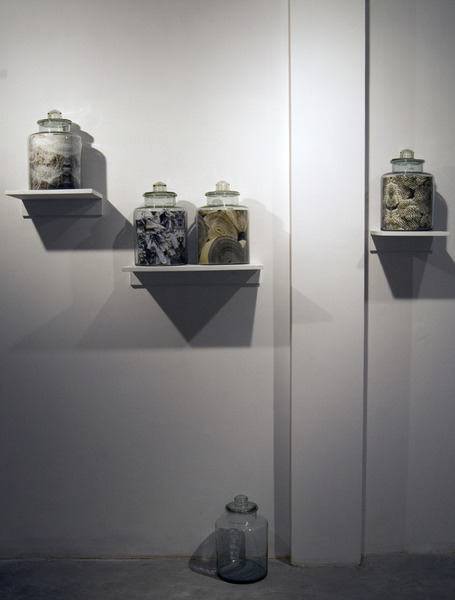 HS: The empty glass jar also has old implications of containing secrets, of containing money, of appealing to the childlike imagination of cookie searches, of 'the bell jar' that contains the whole world. The irony of course, of your jars, is that they are both filled with stacks of 'stuff' and completely empty. Can you remember a particular encounter with a jar in your childhood or even recently that might have a play in this?

SB: Jars always interested me, I was interested in the fact that they could be emptied and filled with things and objects. My encounter with jars has always been visual, watching the homes of various people finding organization in the compartmentalization of jars. In this work in particular I have put images of abundance and chaos in the jars while keeping them empty inside. I am interested in the two extremities juxtaposed together.

Also I am interested in the contrast of scale: earlier I had planned to get a five foot jar made for this work but then it wasn't practical in terms of transport and storage.

HS: When the show first opened, you texted me saying: Remember that review you wrote about introducing dimension through an installation? Do come by to see that realized :). To what extent does criticism play a part in your process as an artist?

SB: Constructive criticism always does. That's exactly what your article did.

For me, good criticism is that which helps stimulate a positive thought process beyond ones present work. From there it's for an artist to understand, analyze, accept and be able to make good use of the same.

HS: How do you think an artist and a critic should converse? Do you think there is a gap in the Indian art scene? What role should the two play with each other?

I think a gap appears when critics are not able to detach themselves from their own personal selves or get influenced by an artist. Being neutral is important. The critics' and the artists' personal relationships should stay out during the analysis of the work.

In many cases, we see that a lot of articles are primarily informative and contain only the artist's point of view of the work. The writer's point of view here is missing. I find such articles meaningless and it only creates a momentary feel-good factor for the artist, without giving any food for thought or inspiring questions about the artists work.

HS: Give me the 'after-the-movie-hilarious-shots' narrative. What went wrong? How did you overcome it? Name a recent inspiration or benign obsession, a favorite time of day, food etc.

SB: Well it all happened when I was under the impression that this show was to take place in July and to my surprise I find that the show is rescheduled to 1st of April.

So I go back to the gallery with my dummy concept with the tiny jars and images. The gallery talks about using large jars for the impact and I wonder how I will find such large jars and will I be able to execute the whole work in such a short notice? So I try to figure out how to find them in places like Ferozabad; even an artist friend helps me by introducing me to a glass manufacturer in North of Delhi, who gives me exorbitantly unaffordable rates for the jars. I try to get help from all possible sources, but in vain.

So... I am totally in a fix and trying to work it out with help of the gallery through various meetings and ideas.

One afternoon I was at one such meeting and I just stepped out of the gallery to take a phone call, when I see this Churan vendor selling churan and mouth fresheners in decently good sized glass jars, (I'm still on the phone) so I follow him, and just as he is turning the corner, I hang up my call and ask where he got the jars.

This gentleman gives me the exact address and location of the market in Sadar bazaar in old Delhi and assures me that I will find even larger jars than his three.

Next morning I take off to the market and find these jars. But I am still not sure how it will work, so I buy one jar and start planning on the work with the images. After a couple of meetings with the gallery and curator, finally it works out. I execute and do a final installation two weeks before the show and we finalise the work. We then take the work off the wall after photographing it for the catalog to reinstall it only a day prior to the preview of the show.

HS: It was meant to be! So, where are you headed next? Four dimensions? :)

SB: Well to be honest, as this was my first step beyond the two dimensional, I think I need to now work on developing this stage before looking for the next. From here there will be a lot of challenge and it's an uphill task. I have to work very hard to develop the present before moving to the next, which should be a natural process the way this step happened. I would not want to force myself to get ahead of myself just out of excitement.

HS: Yes, contain that excitement in one of your jars, but keep it brimming. Thank you for having this conversation.

(All images courtesy of Exhibit 320 and the artist.)