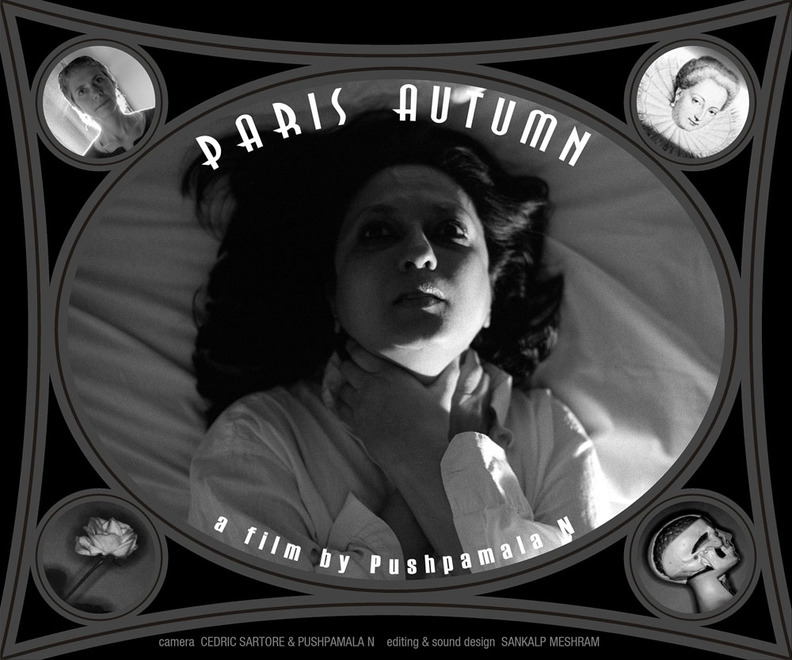 A Long Gaze at Pushpamala N.

Walking into Chemould: black and white posters for Pushpamala N’s experimental fiction, Paris Autumn, are plastered across a ruby red wall. A few steps inside: the crimson curve of an art deco styled theatre is lined with a series of framed film stills--a cinematic installation with the aura of an invitation to the unreal.

Pushing past the pink plush curtain, I entered the screening room. Having missed a few moments, I was just in time for the scene of The First Visitation. The year is 2005, and the ghost of Gabrielle d'Estrées, King Henry IV’s beloved, appears before Pushpamala N, who is in Paris on a residency.  The artist had just discovered that she happens to be living in an outhouse of the mistress’ mansion in the old streets of Marais.

Comprising hundreds of black and white still photographs either casually shot or dramatically staged in cafes and streets around the city, Paris Autumn is a gothic thriller in which, spurred on by the spectre of history, the protagonist plays detective. Pushpamala N explores not only the city of Paris--its underground scene of migration cultures and prisoner passages, but also the photographic image. As she revisits 16th century France through paintings that she encounters in the Louvre, she employs comic strip style speech bubbles for dialogue and an ambient sound track to enhance the mood.

At a crucial juncture that is the crux of the film, the visual language changes, and a game of knots and crosses played with information and images flashes onto the screen. Riots break out in Paris, and Pushpamala N’s vigilance allows her to skillfully interpose these present-day politics of Arab and African youth violence against France’s own bloody and colonialist past. Through art historical references to the Thirty Year War, Pushpamala N critiques this cradle of culture and civilization for its religious and class wars.

Outside the screening room, a walk across a short corridor led to what felt like an annex to the gallery-turned-cinema.  There, one encounters an initial, unavoidable glimpse of the reflection of a photograph that is framed on the wall by the entryway.  I was perhaps as intrigued by the orchestration of this encounter as I was by the photograph itself, which captures a dramatic moment between Pushpamala N dressed like a peasant, holding the palm of her co-actor, who is shown wearing a tweed coat and hat. But these guises rendered these characters disconnected from their roles in the film. So what was going on? Standing in the centre of that space, looking back and forth between the photograph on one wall and the mirror image of it on the other, I was first perplexed, but soon after, quite intuitively, felt that this was the room where the secret was kept.

In a later exchange, Pushpamala N confirmed this conjecture, “It is the room where the secret is kept!”

Mentioning a famous Mannerist painting, Gabrielle d'Estrées and her Sister, which hangs in the Louvre, the artist revealed that traces and techniques of Mannerism, including the elaborate and enigmatic system of symbols that often also involve the magic of mirrors, can be found throughout the film. “The back room,” Pushpamala N said, “is a playful extension of that.”

“The photograph,” she explained on the other hand, “is a loose recreation of a famous and influential painting by Caravaggio, called The Fortune Teller, which shows an Egyptian woman reading the future of a Frenchman.” The painting has many French imitations and, given the highly referential nature of Paris Autumn, Pushpamala N employs them all quite early in the film to introduce and establish the ever-present subtext of race.