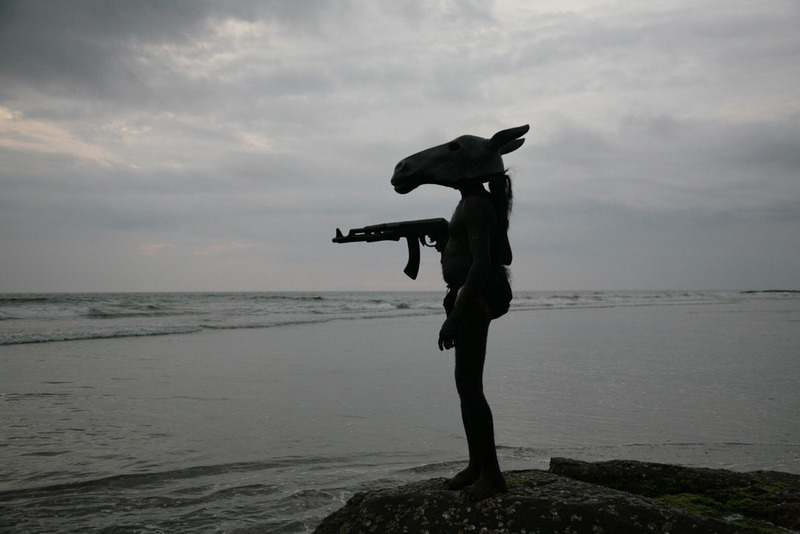 When Death Came from the Ocean: Subodh Kerkar at Work

Subodh Kerkar, the Goa-based artist, is in the midst of preparing a series of installations, paintings, and photographs for his solo exhibition in Gallery Beyond, Mumbai, that opens on 24th November to commemorate the terror attacks on Mumbai last year. I had an opportunity to observe the artist close at hand in his studio in Goa as he worked on the series he entitles Of Donkeys, Demons and Diabolical Death. The two recurring motifs of his new work are donkey-headed men with guns and electronic circuit boards.

The show will include a series of photographs of his performance-installations of gun-toting men wearing fibre-glass masks of donkey-heads as well as paintings of somewhat more abstracted donkey-headed forms dominated by a palette of red and black.  The exhibition will also debut a large installation of a fiber glass dinghy covered with painted electronic circuit boards half-concealing tubes of running red water.  The men who unleashed terror on Mumbai are supposed to have landed on the Mumbai coast in an inflatable dinghy that carried death in the form of AK-47 guns and satellite mobile phones that allowed them to keep in constant touch with the master-minds of the attack.

Subodh Kerkar’s new works are an artistic response to the diabolical marriage of terrorism carried out by indoctrinated mercenaries with the precision made possible only by new communication technology. The electronic circuit boards, not only add texture to his paintings, but direct our attention to this unholy alliance.

The incorporation of these artifacts into the paintings is a brilliant modality of expression where form becomes inherently a part of the content of his works. Another interesting  feature of the paintings is that a couple of them incorporate photographs of the performance installations, thus bringing the fluidity of site-specific installation into the fixity of the canvas.

Another set of photographs in the series is created with puddles of red paint on the beach, with the menacing image of a buffalo walking through them. The buffalo, the vehicle of Yama, the god of death in the Hindu tradition, adds an iconic pictorial dimension to the strikingly simple haphazard red puddles.

The performance installations have human bodies theatrically arranged in postures and attitudes that emphasize the malevolent intent and macabre consequence of terror captured in high-contrast photographs with the black masks drawing our attention to the form in the backdrop of the ocean. The ocean, in turn, recalls Subodh Kerkar’s oeuvre of installations that turns the sea shore into his canvas. His works have always engaged with the many memories of the sea and this series of works adds an overtly political aspect to the signature of his work that bears a talismanic idiom of the genealogy of the sea.