Born in Beijing, 1952, Zhang Wei grew up in the old style courtyard home of his paternal grandfather, a wealthy business man, with his mother and siblings. During the cultural revolution the Red Guard destroyed the courtyard. His grandmother was beaten to death and her possessions burned. Wei's father died in prison in 1968. That same year Zhang Wei was sent to Lingqi Province, Shanxi, for re-education. He returned to Beijing in 1970 with a foot injury and in 1972 he met Ma Kelu and joined helped form the Wuming ("No Name") Group. In 1985 Zhang Wei and friends organized the Graffiti Exhibition, but the police closed it down before it had a chance to open because the artwork was seen as transgressive by the Chinese government. In 1986 Zhang Wei traveled to America to participate in the exhibition Avant-Garde Chinese Art, organized by MIchael Murray from Vassar College. In 2005 he returned to Beijing, and now has a studio in Suojiacun. 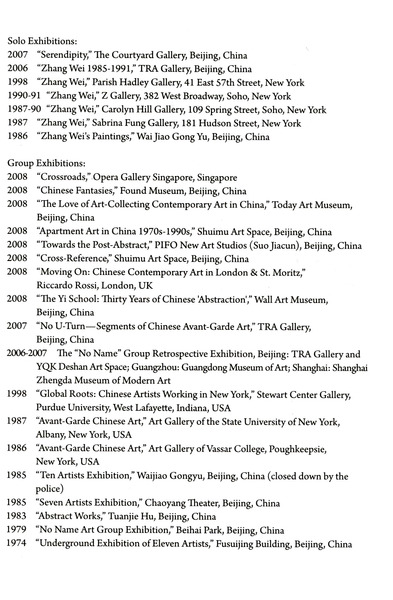