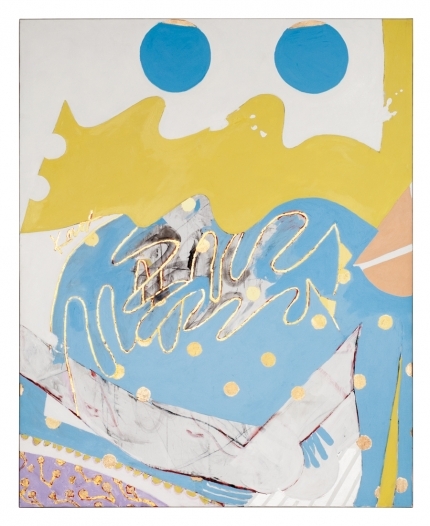 Knox Martin is a painter, sculptor and muralist.

Knox Martin (born February 12, 1923 in Barranquilla, Colombia) is the son of the aviator, painter, and poet William Knox Martin,  the first man to fly over the Andes mountains.

After serving in World War II, Knox Martin attended the Art Students League of New York on the G.I. Bill from 1946-1950, where he studied with Harry Sternberg,  Vaclav Vytlacil, Will Barnet, and Morris Kantor.

Since then, Knox Martin has been a celebrated painter, sculptor and muralist.  Knox Martin has an extensive exhibition record and his work is in museum, corporate and private collections worldwide. His two best-known murals in NYC are Venus and Woman with Bicycle. Knox Martin has been the recipient of many grants and awards, most recently the Benjamin West Clinedinst Memorial Medal, awarded by the Artists’ Fellowship “for the achievement of exceptional artistic merit.”

"Art is at its cutting edge out of a specific lineage - the creation of reality. The subject matter of what I do is Art."  - Knox Martin

"Knox, you are the only one around with aesthetics!"

"You are my mentor.  For years, I always asked, what would Knox think of my painting?"

"I was present when Knox Martin changed the life of a major artist by diagramming the basic structure of a Frans Hals.  That artist was Al Held."

"Knox, you are the spirit of art!"

"Knox, your work has a snooty look about it, I haven't seen outside of Matisse."

"There are many sexually overt works in this exhibit but the painting with no recognizable image, (Caraja) by Knox Martin; its head and shoulders more sexy than anything there!"

"Anyone interested in drawing should see this exhibition of drawings by Knox Martin; he is his own man!"

"This is the greatest drawing I have ever seen!"

- Stanley Boxer (Signaling out a drawing by Knox Martin, opening night at an Ingber Galley exhibition)

"Charlie Egan has taken you on.  You have no idea how jealous everyone is that you have been taken on by Charlie."

After Knox had given a talk on children's art (Olivia's paintings and drawings) age 6,  on paper and blackboard, to Cy Twombly, Bob and Susan Rauchenberg -- Cy jumped up and said, "That's  what I am going to do for the rest of my life!" He did.

"Knox, your paintings are first rate!"

“You are the greatest living American painter.”

-Will Barnet to Knox Martin
After an hour looking at "Woman with Red Shoes" at the Woman: Black and White    Paintings show at Woodward Gallery, with William Crovello and John Woodward (in a telephone call to Knox from the gallery).

“This is the greatest painting!”

"Knox Martin was the first artist whose work I thought about critically and analytically."

Randy Fordyce, "Knox Martin in the Spotlight", Not Just Jazz: The Uncommon Denominator
1:3 (1980)