THE EXCITING "GHOST BUS": A VISUAL ADVENTURE IN THE LAND OF ROBIN HOOD

“The Ghost Bus” is a visual art project by Roberto Alborghetti, Italian journalist, writer and visual artist. Website and social media viewers are enthralled and mystified by what Roberto has created from the totally natural and realistic photo images he took of the 1956 “Ghost Bus” when he toured the huge Bartons garage site housing superb exhibition and special events space as well as a wonderful collection of vintage vehicles.   Can you believe that this art is from an old bus?

What captured Roberto’s imagination was the story behind the “Ghost Bus” which Simon Barton relayed to him.  The URR 865 AEC Reliance had been slumbering in an open Suffolk field for 20 years, resistant to both scrapping or restoration, before being discovered and brought back to its original fold a few years ago.

A vehicle-sister of the “Ghost Bus” had been documented in an incredible 1959 movie in Kodachrome colour of a group of English ladies and gentlemen who toured from Nottingham to the Italian Riviera on a Bartons Road Cruise Holiday, now posted on http://www.bartonsplc.co.uk/index.php/2012-01-23-22-22-17/the-ghost-bus.

Bartons was once the largest independent bus company in Western Europe and one of the first firms in the world to operate a timetabled bus service.

It was good reason for Roberto to create and build a different road trip of the artistic kind between Italy and the land of Robin Hood.   So he set to work incorporating the “Ghost Bus” for his “Lacer/actions” project concerning realistic images of decomposed publicity posters, natural cracks and scratches, urban and industrial tokens and materials.  The project, preceded by 3 trailers and a flyer, consist of two short movies for public performances and video shows, a limited edition special poster (showing 9 images from the films),  a special card series (reproducing 16 artworks selected from the 109 that had been created) and a collection of canvases.

The Ghost Bus project is already attracting media and TV attention in Italy and around the world, so hop on board and enjoy the ride! 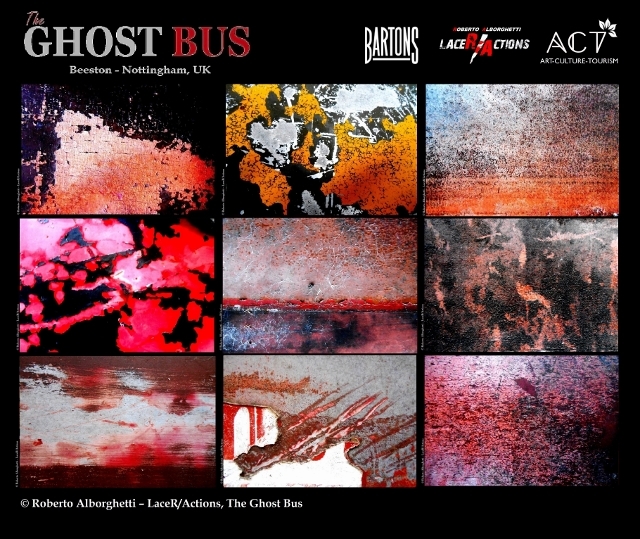 See the project gallery posts on his website so far 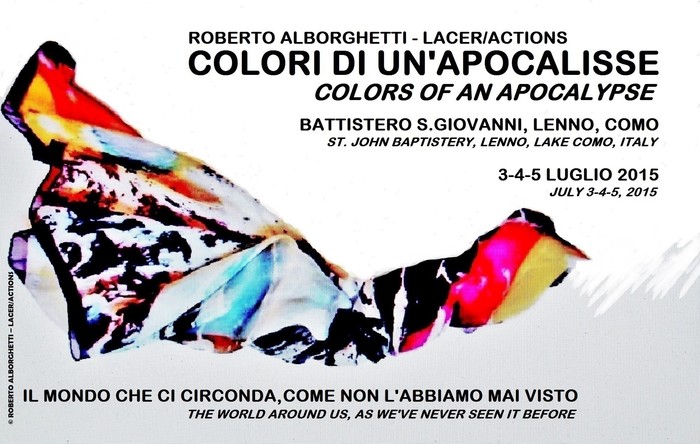 The recent ROBERTO ALBORGHETTI solo exhibit – “Colors Of An Apocalypse / The Decomposed Publicity Posters″ – took place in an amazing Romanesque temple, on Lake Como, Italy. The show was exceptionally scheduled for 3 days, on July 3-4-5, 2015, in the beautiful Lenno town, in the historical center, where we admire one of the most stunning examples of Romanesque art in Northen Italy: St. John Baptistery (XI Century), a really beautiful setting for Roberto 's upcoming show. The image-symbol of the exhibition was a limited-edition silk scarf created for its “Lacer/actions” project with the collaboration of Italian textile designer Bruno Boggia. The exhibition displayed 25 artworks (abstract photos on canvases/silk scarves).

Oil-paintings? Decoupages? Chalks pastels? Acrylics? No, nothing of all that. They are “laceR/Actions”, a sort of "psycho images" that seem to arrive from Nowhere...

Roberto Alborghetti has been working on his project for a long time. His incredible research is concerning ripped advertisings, torn and decomposed publicity posters and urban tokens. He gathers pictures from city walls and along the streets. Abstract and visionary images become art works, reproduced on canvases and lithographic prints, re-built on collages  or other materials (textiles, paper, glass…) An astonishing “dimension of colours” invites us to discover that in the reality “we may see things that we don't even imagine”.

In fact – as Roberto Alborghetti says - we find it difficult to think that behind faded and torn messages there may still be “something” to be seen or discovered. But these images - “lacer/Actions” - continue to be a mirror of the talking city. They are the post-communicating findings of a product, an event, a performing idea. For Roberto Alborghetti, in the lacerated advertisings is recognizable the “unwrapped” city, self-destroying in the messages, self-regenerating and self-reproducing in new visual elements, often contradictory, dissonant, discordant, but still surprisingly vital. He has collected so far more than 40.000 images all around the world.

Some of Roberto Alborghetti ‘s “lacer/Actions” were published in a booklet-portfolio (2009). His show ("The 4 Elements of Lacer/actions") was visited in 2010 by 30.000 people. In October 2011, some "Lacer/actions" artworks will be on show in London (Parallax AF). His "Colors Of An Apocalypse" Exhibition has been hosted at Aldobrandesca Fortress (XIII Century castle in Tuscany, Italy) from October 6, 2012 to January 15, 2013 with a great success.

His most recent projects are:  “Contemplations and Lacer/actions” (album, videoclip and installations inspired by Thomas of Bergamo Scripts, 1563-1631), “Atelier of Colors and Emotions” (which involved autistic kids, 2013 and 2014 ), “Lacer/actions on Aluminium” (11 installations for Fai Private Collection, Italy). Roberto Alborghetti artworks are part of Contemporary Art Collection (Mercatello sul Metauro, Marche, Italy) and participating to “An Exhibition, a Restoration” in Norcia (Umbria, Italy) from July 12 to September 7, 2014.

Saturday April 27, 2013 (10:30 am) at the Palazzo Gasparini (a XVII Century palace) in Mercatello sul Metauro - a picturesque and fascinating medieval town in Marcheregion (PesaroUrbino, Italy) - will open the new Permanent Collection of Contemporary Art as a  completion of the St. FrancisMuseum of Ancient Art which will shortly be reopened to the public after the restorations. The collection includes 158 works including 32 sculptures and 126 paintings by established national and international artists. There will be also a work created by Roberto Alborghettifor his "Lacer/actions"project among the 158 pieces shown in the permanent collection. Roberto Alborghetti was proud to donate his work accepting the invitation from the Organization. Curator Pasquale Martini viewed some of Roberto Alborghetti's works ( images of torn and decomposed publicity posters) focusing his attention on an image that, according to Martini, depicts and interprets the sense of Alborghetti's research about the “decomposed and contaminated signs of our times”. The piece is titled "There is some chaos, with a focal point"(canvas, 63 x 43). The image was “captured” in Milan during a cloudy day on December 2010.

Journalist and writer, he has written more than thirty books (biographies, interviews, stories),he has worked in magazines and newspapers, he has produced Tv documentaries, he is editor in chief of magazines concerning didactic, education and edutainment. He leads workshops about media literacy and image education.

He has won journalism Prizes, such as Premio Acqui Terme, Premio Beppe Viola, Premio Anmil Safety in Work. He is the unique Italian reporter who received the European Award for Environmental Reporting given to him in 1992 in the European Parliament.

He has created “laceR/Actions”, a multidisciplinary project that involves Image reading and urban analysis in a new view of “low brow art”. His images become canvases, lithographic prints, collages and other works (silk scarves, videoclips...)

Short films about “lacer/Actions” (with soundtrack) shown in different themes and arguments.

Possibility to choose and book “laceR/Actions” WORKS in unique and exclusive copies.